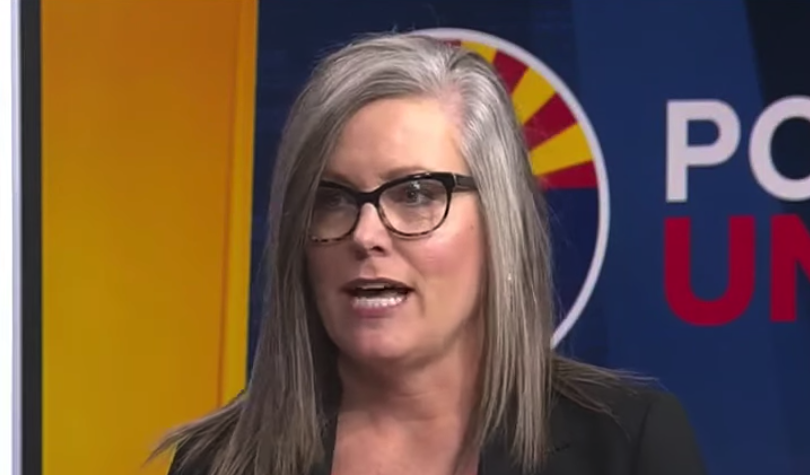 Having refused to recuse herself from overseeing Arizona’s general election results due to what some call a conflict of interest, Hobbs signed off Monday on her own alleged win as governor, along with previous governor Doug Ducey, Attorney General Mark Brnovich and Arizona Supreme Court Chief Justice Robert Brutinel.

What’s this? @katiehobbs certifying her own election. Seems legit. pic.twitter.com/ku4lPv9qqJ

In the face of Lake’s repeated calls for Hobbs to recuse herself, the Democrat has argued that “former secretaries of state have certified their own election wins” and that “her office does not count the votes,” according to ABC News.

In response to the certification, Lake announced to “War Room” host Steve Bannon on Monday, “We’re ready to go with what we believe to be an exceptional lawsuit. And we believe we will be victorious in that lawsuit. We’ll take it all the way to the Supreme Court if we have to. We will not stop fighting. Because the people of Arizona were disenfranchised.”

The Trump-backed Republican contender has five days from the certification of the election to formally challenge its results.

“That’s the most I’ve ever seen Democrats agree that cheating is affecting, in a tangible way … these elections,” remarked Mark Mitchell, the head pollster of Rasmussen Reports.

Mitchell also noted that the 35 percent of Democrats who “strongly agree” with Lake’s assertion that Arizonans have been deprived of their “sacred right to vote” during the 2022 general election is “an absolute massive number.”

A reported 30 percent of voting machines in Maricopa County, which is home to 60 percent of Arizona’s voters, malfunctioned on voting day, arousing concerns that the subsequent hand-counts may have been inaccurate.

According to reports, the great majority of Maricopa County polling locations in which tabulators malfunctioned on election day served heavily Republican-leaning voters.

This is blatant criminal malfeasance pic.twitter.com/udj8Q4xuhc

The voting machine snafus followed an alleged error by local news outlet Fox10 Phoenix in which it aired election “test results” in late October declaring Hobbs the winner. Fox10 Phoenix responded by issuing a statement explaining the graphic showing election results “was never meant to go on air” and had been “part of a test.”

Other observers have regarded the weeklong vote counting period for Arizona as suspicious.

“Any electioneering process that takes six days to determine the winner and permits weeks of ballot collection within the construct is no longer an election based on votes,” a commentary at the Conservative Treehouse asserted, calling this a “brutally and painfully obvious” reality.

Lake told Turning Point USA’s Charlie Kirk that she and her legal team feel “very confident” in their election challenge lawsuit, citing “whistleblowers who have come forward” and what she believes is “at least one smoking gun.”