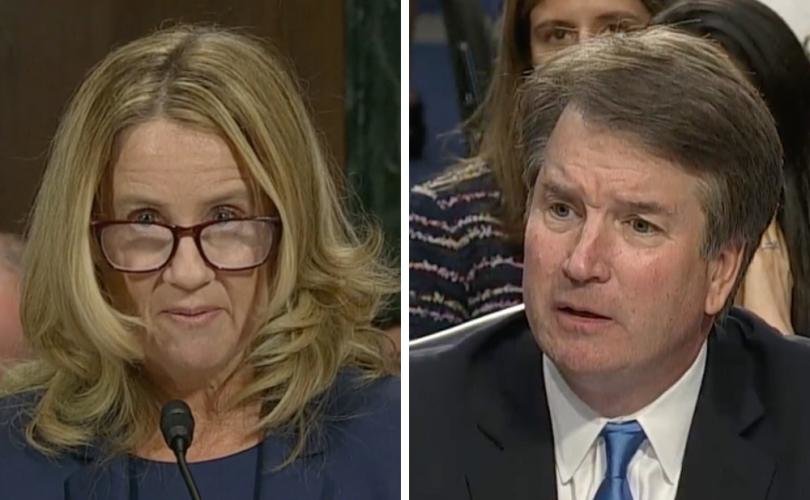 Near the end of Kavanaugh’s fall 2018 confirmation hearings, a trio of women – Ford, Deborah Ramirez, and Julie Swetnick – came forward to accuse Kavanaugh of sexual assault. The judge forcefully denied all of their claims, all of which lacked corroborating evidence.

None of the people Ford claims attended the party where Kavanaugh allegedly tried to rape her could recall any such event, and critics identified numerous inconsistencies in her various accounts of the incident. Swetnick changed several details of her own story, and had been involved in multiple lawsuits pertaining to false harassment claims and other forms of fraud. Ramirez, meanwhile, had admitted to former classmates she wasn’t even sure of her alleged assaulter’s identity.

Nevertheless, many on the Left ran with the allegations, which delayed but ultimately didn’t thwart Kavanaugh’s confirmation vote.

Search and Destroy: Inside the Campaign against Brett Kavanaugh, written by National Law Journal reporter Ryan Lovelace, is billed as a “deeply researched account” of “the massive funding, sophisticated organization, and fanatical zeal behind the campaign to stop Brett Kavanaugh’s appointment to the nation’s highest court.”

The Washington Examiner reported that as part of his research, Lovelace uncovered an April 2019 speech by Ford’s attorney, Debra Katz, to the University of Baltimore’s 11th Feminist Legal Theory Conference, in which she acknowledged both she and Ford were motivated by something other than truth and justice.

“In the aftermath of these hearings, I believe that Christine’s testimony brought about more good than the harm misogynist Republicans caused by allowing Kavanaugh on the court,” Katz told the audience. “Elections have consequences, but (Kavanaugh) will always have an asterisk next to his name. When he takes a scalpel to Roe v. Wade, we will know who he is, we know his character, and we know what motivates him, and that is important; it is important that we know, and that is part of what motivated Christine.”

“Ford’s audience was not the Senate, as Katz had previously suggested, but the American people,” Lovelace wrote. “If they could be persuaded that Justice Kavanaugh was a predator, then they might not accept a future ruling by the five Republican-appointed justices altering the right to obtain an abortion established by Roe v. Wade. Had the Senate understood Ford’s real motivation, as described by Katz, it might have appreciated more fully the pressure that ‘organized forces’ were applying.”

Ironically, Ford and Katz’s fears for Roe may have been unfounded. While President Donald Trump’s selection of Kavanaugh quickly won high praise from pro-life groups and bitter condemnation from the abortion lobby, the judge’s thin record of abortion-related rulings and statements left both sides settling for inferences from mixed signals.

Pro-lifers were heartened by a 2017 speech in which Kavanaugh seemingly-endorsed the late Chief Justice William Rehnquist’s view that a right to abortion was not “rooted in the traditions and conscience of our people,” and that Roe exemplified the “freewheeling judicial creation of unenumerated rights.”

On the other hand, during his confirmation hearings Kavanaugh expressed significant respect for Roe’s status as precedent and appeared reluctant to reiterate his 2017 commentary on unenumerated rights – so much so that pro-abortion Republican Sen. Susan Collins of Maine specifically cited her confidence that Kavanaugh would uphold Roe as part of why she voted to confirm him.

Since joining the court, Kavanaugh’s tenure so far has not reassured pro-lifers. Last year, he joined the court’s liberal wing in declining to hear Kansas and Louisiana’s appeals defending their efforts to cut off Medicaid funds to Planned Parenthood, a decision Justice Clarence Thomas excoriated as “abdicating our judicial duty.” In February, he concluded that Louisiana’s abortion facility standards should have been allowed to take effect, rejecting abortionists’ complaint on technical grounds, but appeared to concede their underlying premises about the “undue burden” standard for abortion restrictions.

In June, The Federalist’s Mollie Hemingway and the Judicial Crisis Network’s Carrie Severino released another book on the Kavanaugh battle, Justice on Trial: The Kavanaugh Confirmation and the Future of the Supreme Court. Both it and Search and Destroy are published by Regnery.