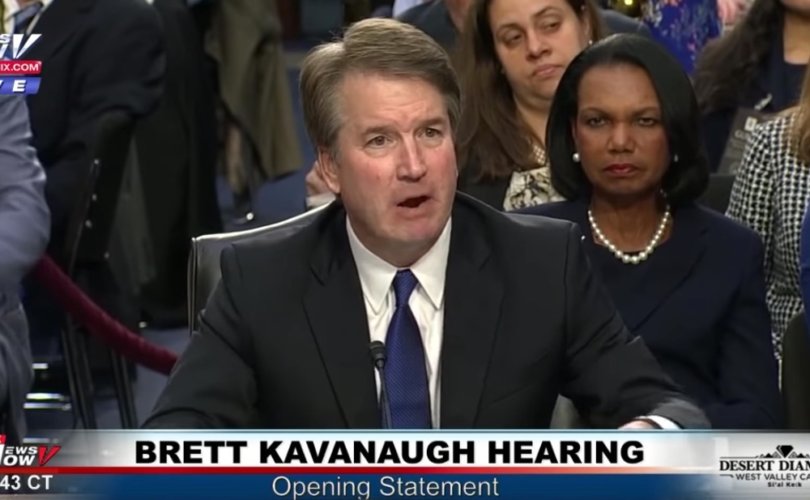 WASHINGTON, D.C., September 28, 2018 (LifeSiteNews) – Judge Brett Kavanaugh appears likely to be confirmed as America’s next Supreme Court Justice, despite inflammatory accusations promoted at the last minute by the media and Senate Democrats.

The Senate Judiciary Committee voted 11-10 Friday to approve Kavanaugh’s nomination, sending him to the full Senate for final consideration. Townhall reported last night that a Senate insider says Republicans have the votes to confirm him.

All Republicans, including moderates Jeff Flake of Arizona, Susan Collins of Maine, and Lisa Murkowski of Alaska, will reportedly vote “yes,” as will Democrat Joe Manchin of West Virginia. Flake and GOP moderate Bob Corker of Tennessee, both of whom are retiring after their current terms expire, separately confirmed they will vote for Kavanaugh.

Kavanaugh’s confirmation hearings were, at first, largely defined by standard political attacks over his presumed pro-life views. A week later, however, the press began reporting on claims by Christine Blasey Ford that Kavanaugh attempted to rape her as a drunken teenager at a house party in Maryland.

Ford is a Palo Alto University clinical psychologist and registered Democrat who has donated small amounts to the Democrat National Committee and failed presidential candidate Bernie Sanders, has donned a pink “p*ssy hat” and attended a local Women’s March in protest of President Donald Trump, and signed an open letter condemning the Trump administration’s handling of illegal immigrant families detained at the southern border.

Kavanaugh categorically denied the claim, vowing it wouldn’t intimidate him into dropping out and giving the committee calendars showing he was largely out of town during the summer when the party allegedly occurred.

Skeptics raised several questions about Ford’s story, such as her inability to recall the location or year of the party, every individual she named as attending the party having denied any knowledge of the party or the assault, and inconsistencies between the versions of her story in her polygraph test, statement to the Washington Post, letter to Sen. Dianne Feinstein, D-CA, and her 2012 therapists’ notes (which describe an assault but don’t name Kavanaugh).

On Thursday, the judiciary committee invited both Ford and Kavanaugh to testify under oath. Democrats questioned both witnesses, while Republicans enlisted Arizona Republican prosecutor Rachel Mitchell to cross-examine Ford. Many criticized the format of alternating five-minute turns for Republicans and Democrats, which frequently interrupted Mitchell’s attempts to develop lines of inquiry.

Ford insisted that Kavanaugh was “the boy who sexually assaulted me” in her emotional testimony. “For a very long time, I was too afraid and ashamed to tell anyone the details. I did not want to tell my parents that I, at age 15, was in a house without any parents present, drinking beer with boys,” she said. “I tried to convince myself that because Brett did not rape me, I should be able to move on and just pretend that it had never happened.”

Her remarks won high praise in the media for sounding “credible,” including from some conservatives. But Mitchell reportedly concluded that she heard insufficient evidence to justify a search warrant, let alone charges.

Kavanaugh opened his testimony by forcefully denouncing what he called a “search and destroy” campaign against him and laying out the lack of independent corroboration of Ford’s accusations.

“This whole two-week effort has been a calculated and orchestrated political hit, fueled with apparent pent-up anger about President Trump and the 2016 election,” he said. “Fear that has been unfairly stoked about my judicial record, revenge on behalf of the Clintons, and millions of dollars in money from outside left-wing opposition groups.”

While Kavanaugh expressed visible anger at the media and the committee, he was careful not to attack Ford herself. He granted that someone else may have assaulted her, and relayed similar compassion from his family.

“The other night Ashley and my daughter Liza said their prayers, and little Liza, all of 10 years old, said to Ashley we should pray for the woman,” Kavanaugh said. “That's a lot of wisdom from a 10-year-old.”

Sparks flew between Kavanaugh and several committee Democrats including Pat Leahy and Dick Durbin, who tried to get him to agree that his confirmation should be delayed indefinitely for an FBI investigation.

At one point, the GOP went on the offensive against Democrats by challenging why Feinstein waited almost two months to share Ford’s letter with the committee and didn’t question Kavanaugh about its claim, publicly or privately. Feinstein claimed she was merely respecting Ford’s privacy and denied leaking it to the Washington Post. She suggested Ford’s friends may have verbally relayed the story to the media, despite the Post reporting it had read the letter itself.

“If you wanted an FBI investigation, you could have come to us,” Sen. Lindsey Graham, R-NC, told his Democrat colleagues in indignant remarks Thursday. “What you want to do is destroy this guy’s life, hold this seat open, and hope you win in 2020 […] This is the most unethical sham since I’ve seen in politics and if you really wanted to know the truth, you sure as hell wouldn’t have done what you’ve done to this guy.”

Graham, a moderate senator who has steadily warmed to Trump since the 2016 election, warned his fellow Republicans that voting “no” would “legitimiz[e] the most despicable thing I have seen in my time in politics.” To Democrats, he simply said “Boy, you all want power; God, I hope you never get it.”

Following Ford’s claims, Deborah Ramirez and Julie Swetnick came forward with sexual assault allegations of their own, also without corroboration. Their claims have gotten little traction outside of left-wing blogs, Planned Parenthood fundraising, and tangential references by Democrats.