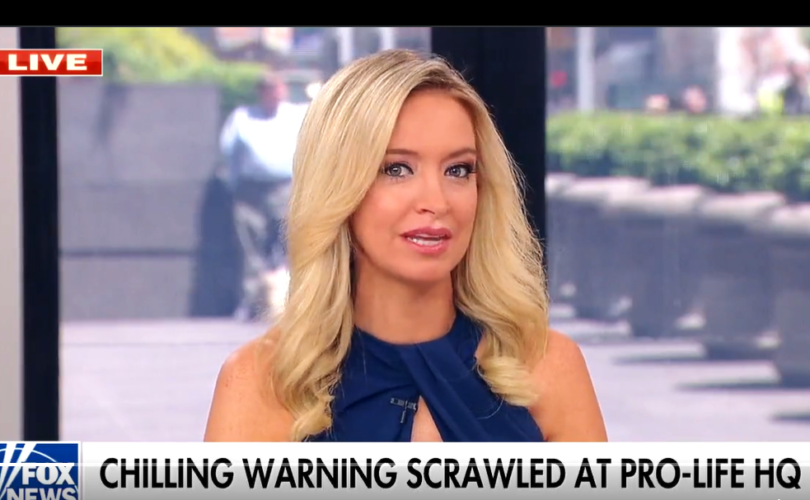 (LifeSiteNews) ― Former White House Press Secretary Kayleigh McEnany called President Joe Biden to task Monday for his silence on the threat by the radical pro-abortion group “Ruth Sent Us” to “bur[n] the Eucharist.”

“Talk about burning the Body of Christ. Think about that. That is what they say when they’re talking about burning the Eucharist,” McEnany said on the Fox News show OutNumbered FNC, which McEnany co-hosts. “And our President is Catholic. One would think … that that would so grate at his soul as a Catholic, that it would compel him to say something, but he’s not.”

— Article continues below Petition —
PETITION: Call on Biden to condemn violent pro-abortion rioters across America!
Show Petition Text
19112 have signed the petition.
Let's get to 20000!
Thank you for signing this petition!
Add your signature:
Show Petition Text

According to Catholic Church teaching on transubstantiation, the host of bread, once consecrated by a priest, becomes the true Body and Blood of Jesus Christ, under the appearance of bread.

While Biden is a self-proclaimed Catholic, by publicly supporting a so-called “right” to abortion, the killing of innocent children, he is facilitating a grave moral evil, and according to the Catholic Code of Canon Law, must therefore not be admitted to Holy Communion.

It is publicly known that Biden persists in receiving Holy Communion, and he is therefore already committing the additional grave sin of sacrilege, involving irreverent treatment of the Eucharist.

McEnany’s reproval of Biden came during a discussion of the “sick” reactions of some pro-abortion Americans to the leaked Supreme Court draft Dobbs opinion, which would overturn Roe v. Wade if upheld.

“The pro-abortion crowd has talked about “joyfully aborting” children and burning the Eucharist. So sick. So sad!” McEnany tweeted as she shared the Outnumbered clip.

During the Fox News show, McEnany also quoted the pro-abortion protester known as “Crackhead Barney,” who was recorded simulating an abortion in front of pro-life demonstrators in front of New York City’s St. Patrick’s cathedral on Saturday morning: “I’m killing the babies! … God killed His Son, why can’t I?” she reportedly screamed at the pro-lifers.

“Sorry, no,” McEnany remarked. “Humanity killed Jesus Christ, who came to save humanity.”

During the Outnumbered segment, a clip was shared in which “comedian” Laurie Kilmartin told an MSNBC panel, during a discussion on the Roe-overturning draft leak, she would like to “make sweet love” to the person who leaked the opinion. But, “If the leaker is a Republican and I get pregnant during our lovemaking, I will joyfully abort our fetus, and let them know,” said Kilmartin, prompting laughter from the panelists.

McEnany also noted during the segment how remarkable it was that the Biden White House refused to condemn the illegal protests outside of the Supreme Court Justices’ homes, and in fact encouraged them.

In response to the array of disturbing reactions to the potential overturning of Roe v. Wade by pro-aborts, McEnany commented, “All I can say is I don’t have anger for these protesters. I have sadness, I have remorse for them. They are very, very lost when you can say something like that, with joy at the thought of killing a child.”

Fox News has also pointed out that the Department of Justice has remained silent on the ongoing protests by pro-abortion activists outside the Justices’ homes despite their violation of federal law.