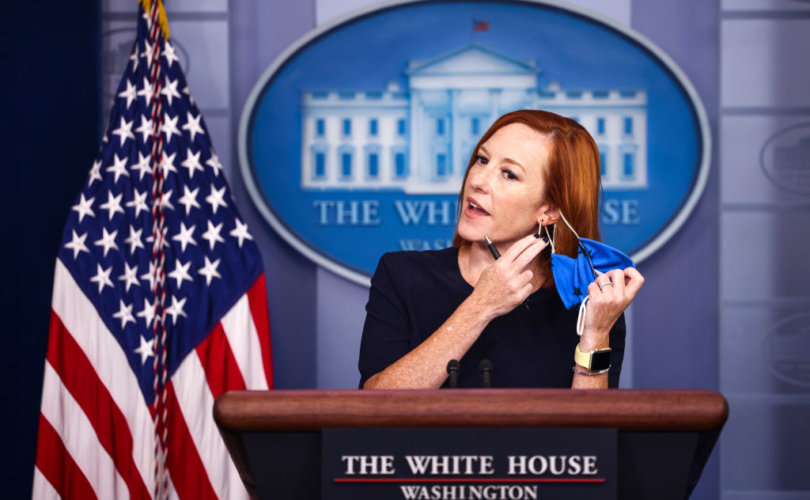 (LifeSiteNews) — Kayleigh McEnany is calling on White House press secretary Jen Psaki to cry about the millions of babies who have been killed since Roe v. Wade instead of about the protection of children from LGBT indoctrination in the classroom.

The former Trump White House press secretary pointed to her successor’s emotional complaint about the slew of “harsh and cruel” “anti-LGBTQIA and trans” bills being proposed and passed across the country.

“If you wanna cry about one issue in this country right now, I think the press secretary should cry about the 62 million children that do not exist, that have been aborted because of Roe v. Wade, a heinous, heinous decision in this country that has exterminated about one fifth of the United States’ population,” McEnany told Hannity on his Fox News show.

“So if you wanna cry, don’t cry about forcing sexuality on kindergartners. That is sick. Cry about the 62 million children who can’t even go to kindergarten,” McEnany said.

In a News Not Noise podcast discussion with host Jessica Yellin released Tuesday, Psaki’s voice broke as she lamented what she saw as the harmful impact of the so-called “anti-LGBTQIA” bills such as the Parental Rights in Education (dubbed by liberals “Don’t Say Gay”) bill passed in Florida, after she and Yellin accused the legislation of being used as a “political wedge.”

“I’m going to get emotional about this issue because it’s horrible!” Psaki said. She went on, audibly distressed, “But it’s kids who are bullied, and all these leaders are taking steps to hurt them, and hurt their lives and hurt their families! And you look at some of these laws in these states and who’s going after parents who are in loving relationships, who have kids. It’s completely outrageous! Sorry, this is an issue that makes me completely crazy.”

Almost half of the “anti-LGBTQIA” bills Psaki and Yellin referred to propose prohibitions on the exposure of young children to discussions of sexual orientation and gender identity in the classroom or through books, according to a Washington Post count, reported Mediaite.

What the Post referred to as a “historic wave” of bills “targeting the rights of LGBTQ” youth also includes many bans on transgender surgeries or treatments for minors, such as those passed in Arizona, Alabama, Arkansas, and Tennessee. Such “sex-change operations and puberty blockers prescribed to kids” was found to be “child abuse under Texas law,” Texas Attorney General Ken Paxton announced in February.

Following McEnany’s comments, Fox News contributor Douglas Murrary remarked to Hannity that Psaki was “breaking down in tears” for a “ridiculous and insignificant” reason. “It’s ridiculous, because she’s crying … at something that isn’t happening,” Murray said.

“The whole bill in Florida has nothing to do with persecuting gay people or anything like it. It’s about trying to stop not just the imposition of teaching about sex to kindergarteners, but stopping the teaching of an ideology that was literally invented about 18 months ago.”

“Two years ago, nobody had heard about any of that ‘gender-fluid’ nonsense. Nobody talked about non-binarism. Everybody knew until yesterday that there were two sexes … it’s so important to understand that they don’t know how many genders there are yet, because they’re making it up as they go along. It’s incredibly dangerous what these people are doing.”