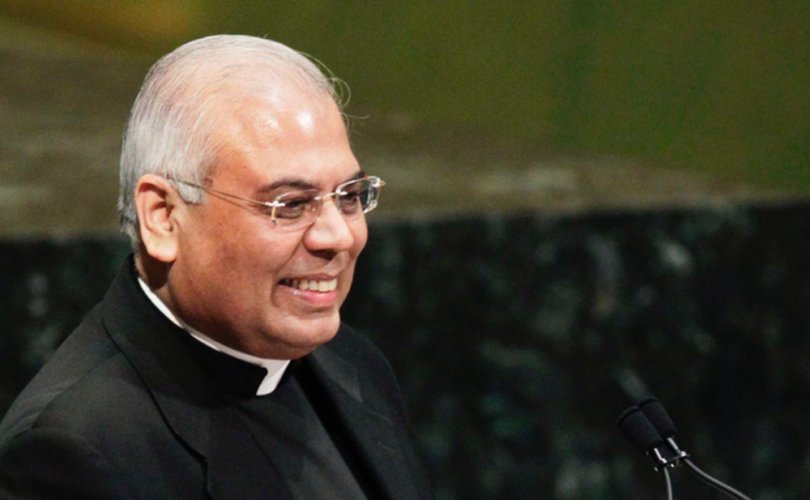 March 19, 2019 (LifeSiteNews) – Kazakh bishops are defending a bishop accused of mistreating employees at a former post at the U.N. and of having an inappropriate relationship with a woman. They stated that during the bishop's three years in Kazakhstan as Apostolic Nuncio there was never the “slightest suspicion” about his “moral conduct” or “any improper behavior towards women.”

The statement (read below) regarding Apostolic Nuncio Archbishop Francis Assisi Chullikatt was signed today by Kazakh Bishops’ Conference president José Luis Mumbiela Sierra and by Auxiliary Bishop Athanasius Schneider. The bishops defended Chullikatt’s character, noting his kindness, his pro-life and pro-family stance. They expressed hope that he would remain in his office.

“With a lot of sadness,” the bishops stated, “the Bishops and Ordinaries of Kazakhstan have read two recent articles published by Crux website and Catholics News Agency on Archbishop Francis Assisi Chullikatt, who is our Apostolic Nuncio in Kazakhstan.”

The Kazakh bishops stated that Chullikatt “has been working very earnestly for the good of the people and the Church in Kazakhstan.” He is described as working “with zeal and joy,” visiting each parish and trying to help “the good of all of us here.” The bishops also stressed that Chullikatt, during his mission at the United Nations, had shown himself “as a staunch defender of the unborn, of the traditional marriage and the institution of the family, often in close collaboration with many friendly Muslim-majority countries, including Kazakhstan.”

Both Crux and Catholic News Agency have reported on Chullikatt's mission at the UN and his purported misbehavior there. Crux, on March 11, published a report claiming that, when Chullikatt was the papal ambassador to the U.N., there were to be found irregularities with regard to the visas and salaries of his staff. Crux claimed that Chullikatt allegedly became “vindictive” when “employees sought Vatican intervention, as well as raising concerns about working conditions under the archbishop.” He was said to have then “forced the departure of core collaborators for the Holy See’s U.N. outpost.” One source told Crux that this event was a “horror story.” Crux also described Chullikatt as a “power-hungry executive.” He was said to treat his employees in such a way that they were left “shaking or in tears.”

On March 16, Crux had to follow up on this initial report, saying that “the Vatican is pushing back against reports about work conditions at its U.N. mission in New York under its former ambassador, in the latest scandal implicating the Holy See’s diplomatic corps. The Vatican’s U.N. mission said the visa status of its diplomatic, technical and service staff were in full compliance with U.S. regulations from 2010-2014, and that its service staff were paid more than New York minimum wage.”

In addition to accusations of financial misconduct, violation of labor laws, and unjust treatment of employees, Chullikatt was also said to have had a “romantic” relationship with a woman. Catholic News Agency claimed on 15 March that “three priests who were members of the diplomatic staff at the Vatican mission in New York” said that Chullikatt “would frequently send the woman 'inappropriate' and 'romantic' text messages from his phone, and that the Holy See’s mission staff assisted her in obtaining a visa to come to New York.” This woman is said to be a consecrated virgin whom Chullikatt is said to have met during a previous diplomatic assignment. One priestly source told CNA: “She was around, we all knew of her. She was a very significant figure in Chullikatt’s life, I think we can put it that way.” This source added that the woman visited Chullikatt at the mission in New York “quite frequently,” and that he behaved with “impunity.”

Chullikatt worked at the U.N. from 2010 until 2014. Since 2016, he has been the Apostolic Nuncio to Kazakhstan, Tajikistan, and Kyrgyzstan.

The Kazakh bishops, in their defense of their current Apostolic Nuncio, stated that “there was not noticed the slightest suspicion about Archbishop Chullikatt's moral conduct or any improper behavior towards women.” They add that, from what they hear, “his dealings and treatment toward his collaborators and employers in the Nunciature is marked by kindness, courtesy, and tact.”

“We never heard any complaint, in this regard,” they stated.

On the other hand, Terrence McKeegan – a former legal advisor to the Holy See’s mission to the U.N.  –  told CNA that, after his signing “a one-year contract to work for the mission, Chullikatt arbitrarily cut his wages. 'On or about December 10 of 2013, I myself was informed by the nuncio that starting in 2014, he would only pay me half of the salary we had contractually agreed upon,'” McKeegan told CNA. Several accusations of this kind are now being reported by CNA and based on multiple sources. The sources say that wages were suddenly cut and that extra work was expected as a service to the Church.

Some of these unusual financial cuts were, according to one priestly source, related to Chullikatt's relationship with the woman. “I would say his need to be tight-fisted with the mission’s finances was, at least partly, because he had a secret need. I believe he was supporting this woman: room, board, everything,” as one priest who was directly involved in the mission’s finances, told CNA.

As one of the few sources to speak about these matters without the protection of anonymity, Terrence McKeegan himself described the  “surreal” working conditions under Chullikatt. In a statement, McKeegan said that, while being in New York, he heard “voluminous allegations of highly improper and scandalous behavior by Archbishop Chullikatt.”

The Kazakh bishops' own experience of Chullikatt, however, is just the opposite. They stated that “in all these almost past three years of his presence in Kazakhstan we heard only good things about Archbishop Chullikatt from the priests, religious sisters and from our lay people, as well as from those who work at the Apostolic Nunciature in Astana.”

The bishops further point to the fact that the Permanent Observer Mission of the Holy See to the United Nations had issued, on 11 March, a statement saying “that the employment conditions and the visa status of all members of the diplomatic, technical and service staff of the Mission during the tenure of Archbishop Chullikatt were fully in line with the laws of New York and the applicable provisions of U.S. State Department regulations.” Thus, the Kazakh bishops see the allegations “with regard to this concrete issue” to be “unfounded.”

“For us,” they stated, “Archbishop Chullikatt is the kind of Nuncio we Bishops in Kazakhstan would like to have with us at least for a few more years.” Additionally, they express their gratitude to him and “wish him strength and abundant Divine blessings.”