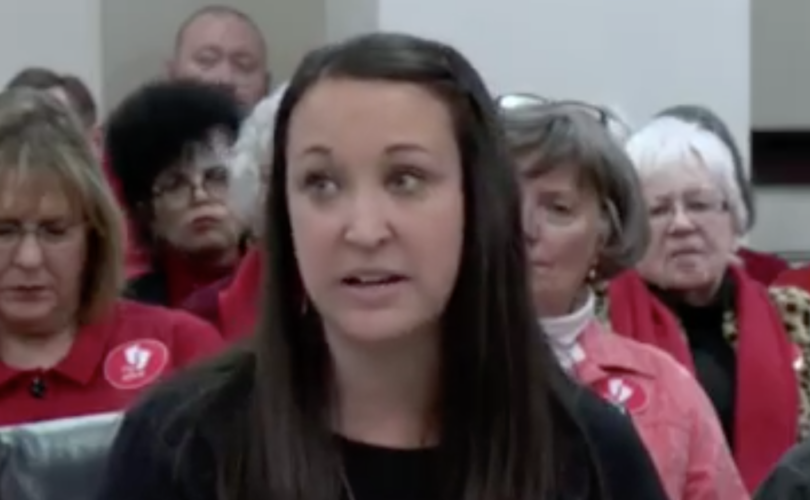 By all appearances, her remarks helped influence their decision to vote 31-6 later in the day in support of legislation that if signed by pro-life Governor Matt Bevin would outlaw most abortions in the state.

In passing the bill, which bans abortions once a heartbeat is detected, Kentucky becomes the latest state in the union to take up the issue of abortion. In recent months, lawmakers in Democrat-controlled New York, Vermont, Virginia, New Mexico, and Rhode Island have either passed, considered, or are considering pro-abortion measures in expectation of the Supreme Court overturning Roe v. Wade. Meanwhile, pro-life initiatives have been introduced in Ohio, Arkansas, Missouri, and Tennessee — states that typically vote Republican during the presidential election.

With a room full of mostly women sitting behind her, the 30-year-old mother of one called on the Senate Veterans, Military Affairs, and Public Protection Committee to vote in favor of Republican State Senator Matt Castlen’s Senate Bill 9. The bill requires a mother seeking an abortion to first determine if a heartbeat is present (usually around six weeks of a pregnancy) and treats any subsequent abortion as a Class D felony (punishable by up to five years in prison) except in cases of medical emergencies.

With Castlen at her side, Culwell read from prepared remarks informing the committee about how she, but not her twin brother, survived the abortion procured by her birth mother, who was in the 8th grade when she got pregnant.

Culwell rebuffed the popular claim that women have a right to an abortion because it’s “my body, my choice.” She stated:

The heartbeats of unborn children matter, she added. “You don’t know what their stories will be or what kind of impact they will grow up to have on our country and on our world. Their heartbeats matter. My heartbeat mattered. My daughter’s heartbeat mattered.” Today, the unborn babies of Kentucky are “depending on you to keep their heart beating.”

Former Planned Parenthood director-turned-pro-life activist Abby Johnson, the subject of the recently released Unplanned movie, also testified for the bill, as did April Lanham, a pregnant woman from Castlen’s district. At the witness stand, Lanham played for lawmakers via an electronic monitor the heartbeat of her 18-week baby in her womb. “That child in her womb is a living human being,” Castlen later said. “And all living human beings have a right to life.”

A former employee of Planned Parenthood as well as a lawyer with the American Civil Liberties Union testified against the bill, which easily passed the committee by a 10-2 vote.

According to The Courier Journal, Committee Vice Chairman C.B. Embry (R) explained his vote by stating, “Human life is the most precious gift the Lord gives us.” He added: “I personally cannot vote to take the life of an innocent, unborn precious child.”

The ACLU is expected to file a lawsuit against the bill if it is signed by Governor Bevin.

Bevin is also being asked to sign a bill the Kentucky House voted 69-20 on last week that criminalizes abortion for any reason except to prevent death or “serious, permanent impairment of a life-sustaining organ.” However, the law would only take effect after Roe v. Wade is either overturned by the U.S. Supreme Court or overridden by a constitutional amendment.

Culwell, who lives in Austin, Texas, was born two and a half months premature, weighing just 3 lbs. and 2 oz. at birth. She spent the first two years of her life in body casts to repair what the abortion attempt did to her body. A much-sought-after public speaker who is active on Twitter and Facebook, Culwell met her birth mother in 2009.

“I came here today to show you the face of a survivor, an abortion survivor,” she told the committee Thursday. “I am not alone. There are hundreds of us in this country that we know of. We have names. We have faces. We have stories. We are human. We deserve to have a voice and a chance at life.”

Last week, she appeared on Fox News along with fellow abortion survivor Melissa Ohden to discuss the growing debate over the Democratic Party’s push for late-term abortion.

Ohden, who visited the White House to meet with President Trump last week, appeared on LifeSite’s new podcast, The Van Maren Show, recently to discuss her own story. Listen by clicking here.