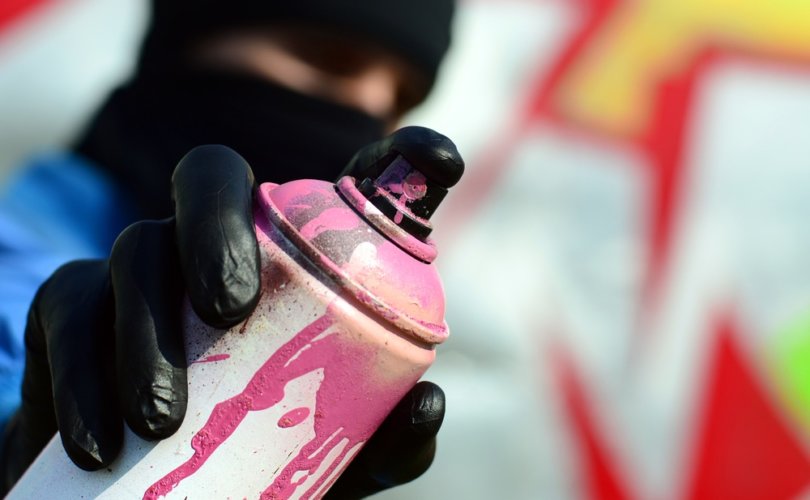 COLUMBUS, Mississippi (LifeSiteNews) — A secluded Baptist church in Mississippi was the apparent target of politically motivated defacement Monday when vandals spray-painted pro-abortion slogans on the church’s exterior walls and windows.

Mt. Avery Missionary Baptist Church in Columbus, Mississippi, a tiny church whose small congregation consists of only about four or five African-American parishioners over the age of 60, was tagged with pro-abortion graffiti sometime between Sunday services and Monday afternoon, local CBS affiliate outlet WCBI reported.

According to the report, the graffiti included typical pro-choice catch-phrases like “Girls just want to have fundamental human rights,” and “Keep your laws off my body,” as well as several references to rape and incest.

WCBI also noted that vandals created “a crude drawing of what appeared to be a sexual assault.”

Deacon St. Armistad told me he was “dismayed” when he found the vandalism. He says abortion or other political topics are not something discussed in any of their sermons. Says the church body is 4-5 members, all over 60. pic.twitter.com/sP7IrjEZVB

The Lowndes County Sheriff’s Department is investigating the vandalism, which has similarly puzzled law enforcement.

“There’s a lot of information about women’s rights,” Lowndes County Sheriff Eddie Hawkins said of the messages scrawled in graffiti on the church’s exterior. “But why here? Why this church?”

Hawkins echoed Armistad in noting that the church is small and isolated, and that “not many vehicles” pass by it, raising questions as to why the vandals would have chosen such a secluded spot to emblazon their political message.

WCBI pointed out that the rural location of the church also makes it hard to locate witnesses.

“We’re trying to ask for the public’s help because this is such a rural area,” the sheriff said.

Anyone who has information about the incident is asked to call the Lowndes County Sheriff’s Department at (662) 328-6788.

Mt. Avery Missionary Baptist Church isn’t the only building to have been recently targeted by politically motivated vandals.

The vandalism of the rural Baptist church is the latest in a string of attacks targeting churches and pro-life centers in the aftermath of the unprecedented leak of the U.S. Supreme Court’s draft majority opinion in a crucial abortion case.

According to the leaked opinion, the Supreme Court is poised to rule in favor of Mississippi’s 15-week abortion ban in the Dobbs v. Jackson Women’s Health Organization case by overturning both Roe v. Wade and Planned Parenthood v. Casey (1992), which upheld Roe.

In response to the leak, some abortion activists have engaged in protests outside the homes of pro-life Supreme Court justices, and others have committed acts of vandalism and property destruction.

The protests and acts of vandalism came after radical pro-abortion group Ruth Sent Us issued a call for a “diversity of tactics” to oppose the overturning of Roe v. Wade.

Recently, another pro-abortion group calling itself Jane’s Revenge took credit for vandalizing four churches in the Olympia, Washington area weeks after it also claimed responsibility for vandalizing and setting fire to the office of a Wisconsin pro-life advocacy group on Mother’s Day.

The Biden administration’s Department of Homeland Security has warned that pro-abortion activism is likely to ramp up as the nation awaits a decision in Dobbs v. Jackson.

The Court is expected to rule on the case any day.