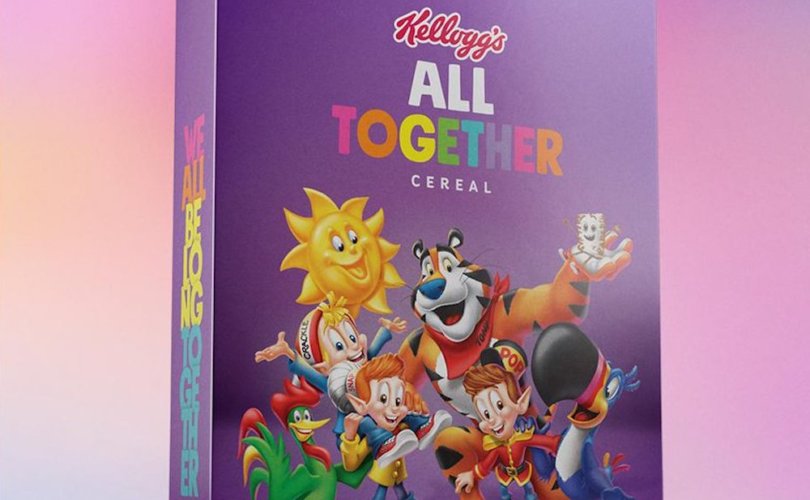 October 22, 2019 (LifeSiteNews) – The iconic cereal brand Kellogg is embarking  on its most high-profile foray yet into the world of identity politics with the announcement of specially packaged cereal meant to support the left-wing, pro-LGBT lobbying group GLAAD.

All Together cereal is a limited-edition variety pack of Corn Flakes, Froot Loops, Frosted Flakes, Frosted Mini Wheats, Raisin Bran, and Rice Krispies, with the mascots of each brand appearing together on the same box. It was created in recognition of GLAAD’s Spirit Day 2019, which the organization bills as a “means of speaking out against LGBTQ bullying and standing with LGBTQ youth.”

As part of #SpiritDay  we are launching a new “All Together Cereal” and donating $50,000 to support GLAAD’s anti-bullying and LGBTQ advocacy efforts. Get your limited edition box of ALL TOGETHER cereal at  https://t.co/oFb3iSGmvZ pic.twitter.com/QwumdUdLuP

The packaging is a “symbol of acceptance no matter how you look, where you’re from or who you love,” Kellogg says, adding that it “is donating $50,000 to GLAAD to support their anti-bullying and LGBTQ advocacy work.”

“One of the nation’s largest makers of cereal wants you to have a breakfast time conversation with your kids about sex and gender,” conservative pundit Todd Starnes lamented. “There’s nothing quite like starting your day with a great big bowl of LGBTQIA+ indoctrination (If I left out a letter, it was not intentional).”

This is far from the first display of Kellogg’s pro-LGBT corporate leanings. The company touts various awards for “diversity” and “inclusion,” and the Gay, Lesbian & Straight Education Network (GLSEN) has previously recognized Kellogg as one of its “Partners in Respect.”

Religious and conservative consumers looking to steer clear of supporting “woke” brands may have their work cut out for them in the breakfast aisle; Kellogg’s top cereal competitor General Mills also boasts of its receiving the approval of LGBT activist groups such as the so-called Human Rights Campaign (HRC).

Consumers interested in learning more about the ideological biases behind the world’s top brands can visit 2nd Vote for comprehensive information about numerous companies’ contributions to numerous political and social causes.