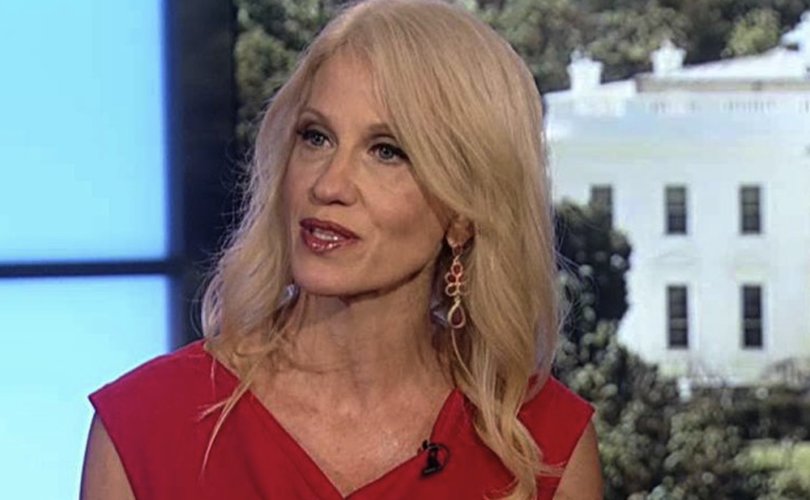 July 30, 2019 (LifeSiteNews) – As Democrats vying for the White House frame themselves as LGBT “allies” looking to replace a “homophobic” incumbent, recent comments by one of Donald Trump’s top advisers underscore that the 45th president actually agrees with the Left on key aspects of the homosexual agenda.

At the end of May, Kellyanne Conway contrasted her boss’ endorsement of LGBT “Pride Month” with his predecessors’ handling of same-sex “marriage,” telling reporters outside the White House she was “old enough to remember the 2008 campaign where Hillary and Obama were arguing with each other about who was more in favor of traditional marriage. It wasn't so long ago. He is the first president to start as president approving of gay marriage.”

Conway was referring to former President Barack Obama claiming to oppose same-sex “marriage” yet asking LGBT activists to wait for him to “evolve” on the issue. Obama fully changed his position in May 2012, the culmination of a process critics claimed was about following the polls rather than sincerely wrestling with the issue.

While Trump has largely pleased pro-lifers, his record on LGBT issues is more mixed. He has moved to ban gender-confused soldiers from the military, protected women from having to share close quarters such as homeless shelters with men claiming to be transgendered, and made religious freedom a priority of his administration.

On the other hand, he has also nominated a variety of pro-homosexual officials to various government posts, including judicial vacancies, and continued a number of Obama-era pro-LGBT policies, such as an executive order on “gender identity nondiscrimination” and U.S. support for international recognition of homosexual relations at the United Nations Human Rights Council.

He publicly praised the pro-LGBT group Log Cabin Republicans in January, and declared after the 2016 election that the Supreme Court’s 2015 Obergefell v. Hodges ruling forcing all 50 states to recognize same-sex “marriage” was “settled law.” In May, he said it was “great,” “normal,” and “absolutely fine” to see South Bend (Indiana) mayor and Democrat presidential candidate Pete Buttigieg on the campaign trail with his “husband.”

Conway’s remarks, and the broader question of where the Trump administration draws the line between embracing same-sex “marriage” and other LGBT demands, has taken on renewed significance after the Democrat-controlled House of Representatives’ passage of legislation enabling “married” same-sex couples to seek millions in tax refunds for unions that were not previously recognized under federal tax law.

The so-called PRIDE (Promoting Respect for Individuals' Dignity and Equality) Act, which also removes sex-specific terms such as “husband” and “wife” from the federal tax code, passed the House without any objection from Republican members, raising concerns as to how it will fare in the GOP-controlled Senate. Neither the White House nor Senate Majority Leader Mitch McConnell have commented on the bill so far.