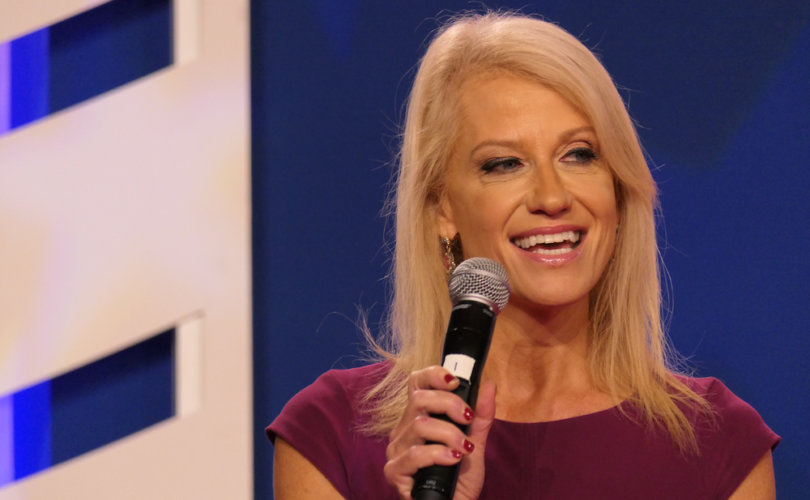 WASHINGTON, D.C., October 13, 2017 (LifeSiteNews) – The first woman to successfully run a presidential campaign and now one of President Trump’s top counselors said she prays as she walks into the White House each morning.

Conway, a pro-life Catholic mom of four, told this to the Values Voter Summit (VVS) this afternoon.

“When I get to the White House in the morning, I first of all say a prayer as I walk in,” she said. “Because every day I ask the Lord to bless everyone who works in that building” and everyone the building represents – all Americans.

She does this “to pray for our safety and our security, our understanding, wisdom.” Then, she heads off to spend her day “mainly in policy meetings.”

Conway touched on her faith and Trump’s conversion on the issue of abortion.

“My faith informs my beliefs,” she said. “I am pro-life. I am very proudly pro-life. The President of the United States sent the Vice President and me to the March for Life back in January, and I was very proud to stand on that stage” and look out at the pro-life movement.

“It took a Manhattan billionaire male who for part of his adult life was pro-choice – for abortion rights – to give the most impassioned defense of life I had ever heard from a presidential debate podium on October 19th last year,” said Conway.

She was referring to Trump’s accurate explanation of America’s extreme abortion laws and the barbarity of late-term abortion as he debated Hillary Clinton.

The U.S. is one of seven countries with no federal limits on elective late-term abortions. Trump has promised to sign the Pain-Capable Unborn Child Protection Act, which would stop most aborts on babies 20 weeks and older.

Trump White House is 'a place where women are respected'

Conway said the “great untold story” of the White House is that it’s an extremely family-friendly place to work.

It is “comfortable and natural” for President Trump to “promote women to high positions.”

“I work in a workplace where working moms and certainly working women are elevated to the highest positions,” she said.

“I hear a lot of people on their soapboxes” and “‘the high horse Cavalry’ always talking about women’s rights and women in the workplace and women’s empowerment,” said Conway. “I’m in an environment where it’s practiced regularly. I’ve never felt otherwise.”

The “great juxtaposition” today is “you see one of the major influencers in Hollywood – (a) major Democratic donor – really ensnared in some pretty ugly stuff allegedly,” she said in a reference to Harvey Weinstein. “And the juxtaposition of that is I at least am … in a place where women are respected. And I appreciate that as a working mom.”

“The thing about Donald Trump that I’ve never heard him say and that he’s certainly never said to me is, ‘I think this will help with the women,’” said Conway. “Or, ‘I think this is great because you’re a woman.’ He doesn’t see it that way.”

She said Trump is “always interested in the personal story of everyone” and their family life.