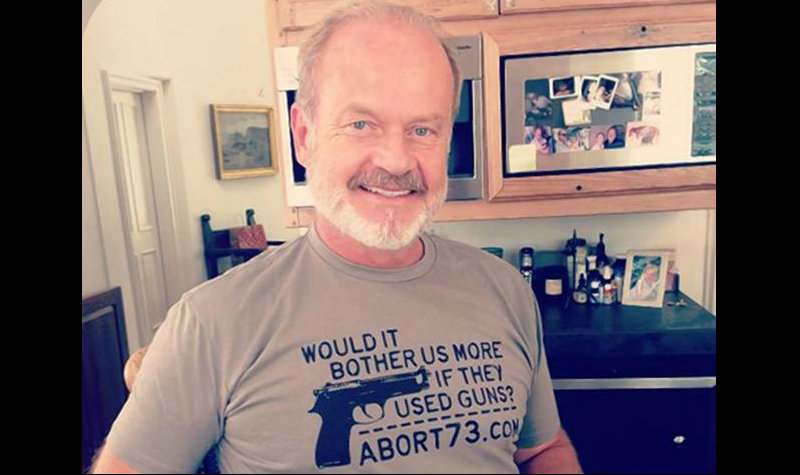 HOLLYWOOD, October 9, 2015 (LifeSiteNews) — Huffington Post is in a huff over Kelsey Grammer for wearing a pro-life T-shirt, though the popular star of Frasier and Cheers is a well-known neo-con and frequenter of disreputable (in liberal circles) places such as pro-life conferences.

Earlier this week Grammer’s wife Kayte posted a picture of him, grinning proudly, wearing a T-shirt from the Abort73 group with what HuffPost deemed a “bizarre” message: “Would It Bother Us More If They Used Guns: Abort73.com.”

The message, helpfully explained HuffPost “senior analytics and news editor” Cavan Sieczkowksi, “asks if those who are pro-choice would still hold their beliefs about the issue if abortions were performed with guns.”

The radical feminist publication shot back: “Well, to answer your question, Kelsey’s ugly T-shirt: yes, it would bother us more! Mainly because guns aren’t generally used by doctors for medical procedures. When imagining a doctor hovering over their patient, you picture them saying, 'Scalpel,' not, 'Semi-automatic pistol.'”

Grammer has publicly campaigned for Republican presidential hopeful Rudy Giuliani and candidate John McCain, and has made no bones about being for small government. His messy personal life hasn’t dimmed his enthusiasm for religion or espousal of neo-conservative values.

Though as late as 2010 he was describing himself as pro-choice, in July he attended the National Right to Life convention in New Orleans where he listened to several Republican presidential hopefuls and was photographed with one of them, Ben Carson.

Earlier this year he played Herod the Great in Killing Jesus as it was shot in Morocco. There he told a group of self-described “secular” entertainment reporters he was not only pro-faith but pro-organized religion.

“Gosh, I think faith is a wonderful thing,” Grammer is quoted by Hitflix writer Daniel Fienberg as saying. “And I even think religion’s a wonderful thing. I know a lot of people want to say, ‘Religion’s the only reason that man has had any trouble at all,’ but you know what? World War I and World War II were not fought because of religious reasons. So the greatest amount of cruelty to one another, the greatest amount of death has been rained down upon each other by simple ideology and acquisition or whatever.”

Kelsey went on to extol the artistic achievements done to glorify God, saying, “The intricacy, the expression of Man and his connection to the universe and to his Creator has brought about some of the most extraordinary things ever.”

Grammer won celebrity for a 20-year-run as the pompous but vulnerable psychiatrist Frasier Crane, first in a supporting role in Cheers and then in the starring role in Frasier.

1
Catholic foundation attempts to save historic basilica up for sale due to clerical sex abuse
2
Popular outdoor-wear outfitter launches ‘Summer of Pride’ with outrageous drag queen video ad
3
The message of Our Lady of Akita looms large amid increased risk of nuclear annihilation
4
Moderna CEO: 30 million COVID jab doses will be tossed ‘because nobody wants them’
5
Forensic exam finds Hunter Biden’s laptop is 100% authentic
Subscribe to Daily Headlines »