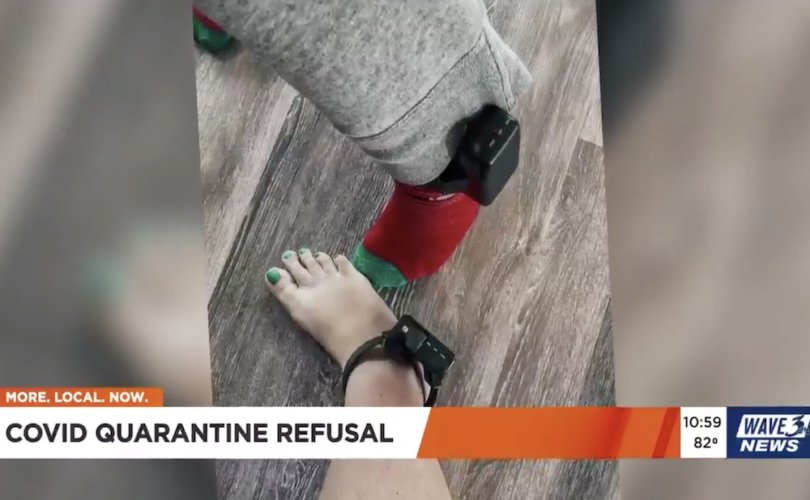 July 21, 2020 (LifeSiteNews) – Health authorities in Hardin County, Kentucky had a woman fitted with an ankle monitor after testing positive for COVID-19, because while she agreed to self-quarantine she refused to sign a list of quarantine conditions she believes went too far.

As a precaution before traveling to see her parents in Michigan, Elizabeth Linscott tested positive for COVID-19 last week, WAVE reported. She was asymptomatic. The health department then asked her to sign a Self-isolation and Controlled Movement Agreed Order detailing the conditions of her home confinement, one of which being that she had to contact the department before leaving home.

Fox News added that she subsequently received a text message warning her that the case was being escalated into a law enforcement matter. A few days later, several sheriff’s department officers came to her home.

“I open up the door, and there’s like eight different people, five different cars,” Elizabeth’s husband, Isaiah, said. “I’m like, ‘What the heck’s going on?’ This guy’s in a suit with a mask. It’s the health department guy, and he has three papers for us — for me, her and my daughter.” They put ankle monitors on the couple that would trigger if they moved 200 feet away from their home.

“We didn’t rob a store. We didn’t steal something. We didn’t hit and run. We didn’t do anything wrong,” Elizabeth stressed. But “that’s exactly what the director of the Public Health Department told the judge, that I was refusing to self-quarantine because of this, and that’s not the case at all. I never said that.” The couple says they will be retaining an attorney to challenge the action.

In response, Hardin County Sheriff John Ward confirmed that his office delivered notice of a quarantine court order to an unidentified individual last week, but denied that his office installed a “location monitoring devices” on anyone, USA Today reported. Lincoln Trail District Health Department spokeswoman Terrie Burgan refused to comment on the case.

This case, which is not the first instance of Kentucky officials enforcing COVID-19 quarantines with ankle monitors, is only the latest example of the dramatic actions that city, county, and state officials across the United States have taken to restrict private citizens in the name of containing the coronavirus, from banning indoor religious services to encouraging residents to report on neighbors not wearing masks.

As of July 20, the United States is estimated to have seen more than 3.9 million cases of COVID-19, with more than 143,000 deaths and 1.8 million recoveries, though questions remain as to just how accurate the official positivity rates and death counts really are.

1
World Economic Forum adviser Yuval Harari is a Marxist who believes there is no truth, only power
2
Pope Francis says there are ‘insufficient elements’ to launch investigation into Cdl. Ouellet
3
Episcopal Church endorses sex changes for children ‘at all ages’
4
Dr. Robert Malone: Endless mRNA jabs are in the works as the CDC and FDA play ‘hide the data’
5
New video highlights Canadian cricket farm amid ongoing push to switch out beef for bugs
Subscribe to Daily Headlines »