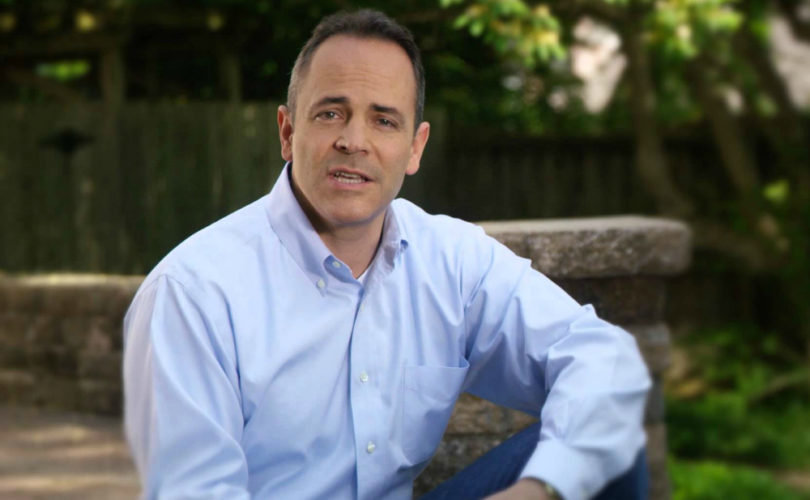 Republican Gov. Matt Bevin ordered the state to remake Kentucky marriage licenses so that they do not include the names of county clerks who register them.

The executive order was given in order to protect the religious freedom of elected Kentucky clerks who object to societal normalization and approval of homosexuality.  The governor explained that he wanted to “ensure that the sincerely held religious beliefs of all Kentuckians are honored.”

Kim Davis, the Rowan County clerk, spent nearly a week in jail in September for refusing to sign her name to homosexual “marriage” licenses, explaining that it was a violation of her Christian beliefs to institutionalize such unions with her signature.

Gov. Bevin's order did not come without controversy itself.  One clerk from Fayette County complained that Bevin was overstepping his authority.  The Huffington Post reports that clerk Don Blevins grumbled, “I'm not pleased at all by this. This has gotten out of hand.”

Not surprisingly, the American Civil Liberties Union (ACLU), currently embroiled in a lawsuit against Davis, also attacked the governor:  “Bevin's executive action has added to the cloud of uncertainty that hangs over marriage licensing in Kentucky,” the ACLU's William Sharp stated.

However, even some Democrats have praised the governor's move.  House Speaker Greg Stumbo spoke positively of the governor “finding a way to balance the law and the concerns (of) county clerks.”

Four homosexual couples have filed a federal lawsuit against Davis for issuing altered marriage licenses which do not include Davis' name.  U.S. District Judge David Bunning has not ruled in the lawsuit, which is supported by the ACLU.