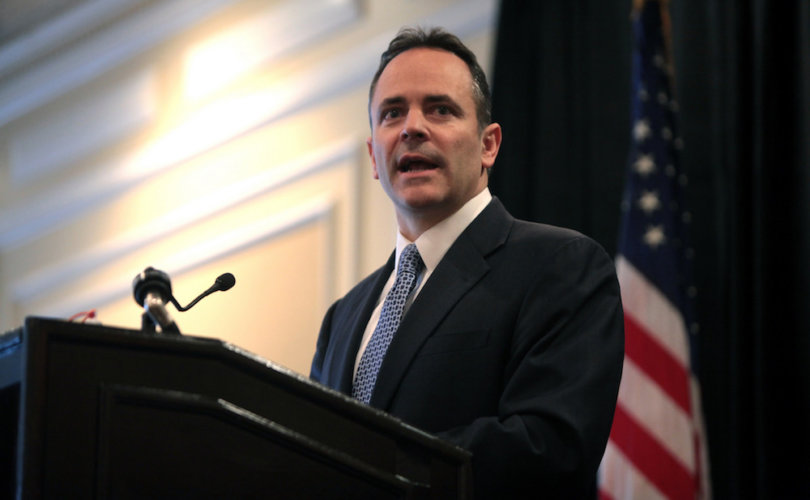 “Our attorney general apparently is under the impression that he gets to pick and choose when he does his job,” Bevin said in a Facebook live video. “He was elected and is in fact being paid by you, the taxpayers of Kentucky and the voters of Kentucky, to defend the laws of the Commonwealth of Kentucky. He’s not allowed to just pander to his base” and “liberal pro-abortion supporters of his and his party’s.”

This is not Beshear's “prerogative,” Bevin said.

Beshear, a Democrat, said he would defend Kentucky's new informed consent law (HB2), which requires mothers to have an ultrasound before having an abortion. It doesn't require mothers to look at the ultrasound or listen to the baby's heartbeat. An ultrasound is standard procedure before an abortion so that the abortionist can ensure he is removing the baby and not dealing with an ectopic pregnancy.

However, Beshear said he would not defend the newly-passed Pain-Capable Unborn Child Protection Act (SB5) because “my duty is to the law.”

The Pain-Capable Unborn Child Protection Act “is clearly unconstitutional based on our review of numerous federal appellate rulings, which state that identical statutes in other jurisdictions are illegal under numerous Supreme Court decisions,” he said.

The ACLU has challenged the informed consent law and says it may challenge the 20-week ban.

Pain-capable abortion bans are law in 19 states, including Kentucky. Court rulings are blocking the law in only three of those states.

In his Facebook video, Bevin promised to “do what I’ve unfortunately had to do for the last 13 months – my job as governor and also the attorney general’s job when…he drops the ball, as he has promised to once again do.”

“We won all three of those lawsuits,” said Bevin. “Shame on our Attorney General for playing partisan politics rather than doing his job.”

Kentucky's new law protecting pre-born children more than halfway through pregnancy from being painfully dismembered in the womb is “widely popular,” said Bevin. “This bill banning abortions in Kentucky after 20 weeks was passed with nearly 80% of support in the legislature, including 20 Democrats.”