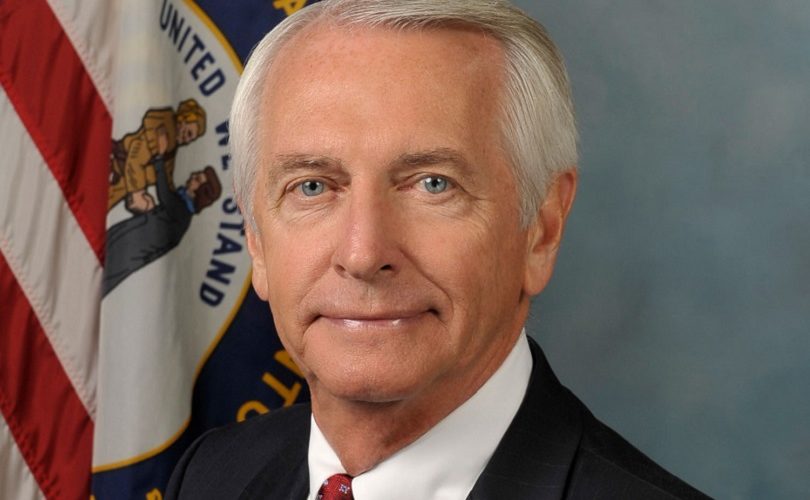 FRANKFORT, KY, July 10, 2015 (LifeSiteNews) — The governor of Kentucky has a stark message for county clerks across the state: Either issue homosexual “marriage” licenses or lose your job.

Governor Steve Beshear, a Democrat, refuses to make any consessions for religious freedom, or to protect the consciences of those who believe in natural marriage.

Beshear issued a statement saying that government employees “must recognize same-sex marriages as valid and allow them to take place.”

Casey Davis is a clerk whose religion teaches that it is unloving to facilitate homosexual sodomy or lesbian sexual activity.  He is among the Kentucky clerks who are not issuing licenses to homosexuals for religious reasons.

Gov. Beshear ordered Davis to issue homosexual licenses, or else he must quit.  “'Issue marriage licenses or resign' — those were the words,” Davis told reporters after meeting with Beshear. “I can't quit…I have a mortgage to pay.”

Instead, the governor gave him an ultimatum:  validate gay marriage, or quit.

There have been 50 special legislative sessions in Kentucky since 1940;  nine in the last 10 years alone.  The Kentucky Legislative Research Commission estimates that a one-day special session would cost Kentucky taxpayers $63,000.

The governor and the clerk are at a stalemate, as Davis said he would neither issue homosexual licenses, nor resign.  “Nature's law will supersede any law that man puts on a piece of paper,” Davis told NBC local affiliate WAVE.  “My job cannot go beyond what my conscience allows.”

At a supportive rally before meeting with the governor, Davis proclaimed, “I am not for sale.”  He said he was elected by the people of his county “to do the job that I swore to the best of my ability that I would do, so help me God,” he said.  “And I intend to do that.”

Davis continues to propose a compromise, that marriage licenses be issued online, so clerks with religious objections do not have to be involved.  “We bank online. We buy groceries online…We buy hunting and fishing licenses online. I think that we can buy marriage licenses online,” he explained.  “And that relieves the 120 county clerks of this state.”

Davis' principled stand was seen as an embarrassment to Beshear when a YouTube video of two men being denied a license by another Kentucky clerk, Kim Davis, went viral and has been viewed more than 1.5 million times.  She is being sued by the American Civil Liberties Union, which is seeking punitive damages, including taking Kim Davis' own personal property.

The Family Foundation of Kentucky has established a fund “for the legal defense of those who are targeted to have their religious liberty curtailed.”  Martin Cothran, Senior Policy Analyst for the Family Foundation of Kentucky commented, “Governor Beshear's refusal to act to protect the religious freedom of county clerks effectively leaves them at the mercy of the ACLU wolves.”

Several county clerks also met with Gov. Beshear, requesting a special session of the Kentucky General Assembly.  The governor was given letters from 57 county clerks –almost half of the state's 120 clerks, all requesting that he take action.

“County clerks did not sign up for this,” Cothran said.  “These are people who swore an oath to Kentucky's Constitution which defined marriage as a relationship between a man and a woman.  Now they are being asked to violate that oath. This is neither fair nor Constitutional.”

Cothran then brought up inconsistencies in the governor's treatment of employees, threatening supporters of natural marriage while giving supporters of homosexuality a pass.  He cited as an example Kentucky Attorney General Jack Conway, who refused to do his job and defend the Kentucky Marriage Protection Amendment, which as Kentucky law was his duty to defend.

Gov. Beshear did not threaten Conway with losing his job, but allowed his Attorney General to ignore the law.  Conway was emboldened by the example of Obama Administration Attorney General Eric Holder, who in 2011 also refused to defend the Defense of Marriage Act, passed by Congress under the Clinton administration in 1996.

Cothran noted, “The governor never wrote to Conway demanding that he perform his job duty, as he has done with the county clerks.  Why the double standard?”

Meanwhile, Casey Davis said he was willing to go to jail to defend his right to religious liberty.  “If that's what it takes for me to express the freedom of religion that I believe I was born with, I'm willing to do that.”

In Nebraska, a state ethics committee ruled that judges and court officials can refuse to perform same-sex marriages, but then they cannot perform any marriages at all.  A Toledo, Ohio, judge is seeking an exemption from performing same-sex marriages, and is awaiting a decision by an Ohio conduct and ethics board.