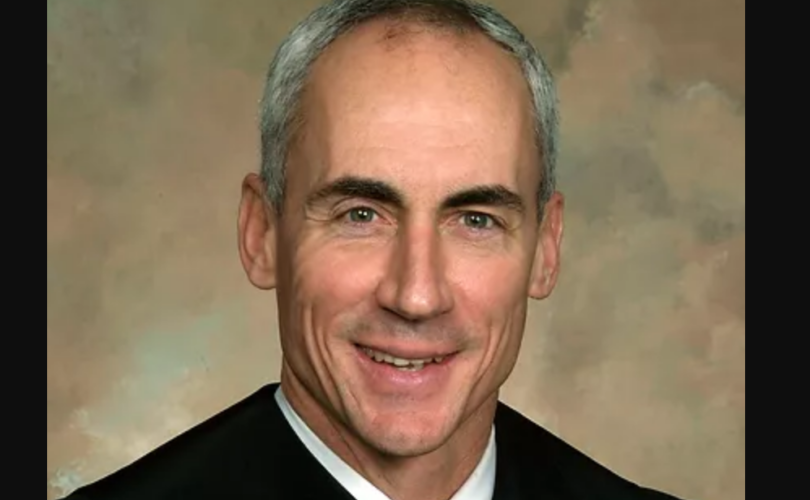 (LifeSiteNews) – Roe v. Wade can no longer be used in court to claim a constitutional “right” to abortion, but a judge in Kentucky has asserted a new rationale for blocking legal protections for the preborn.

On Friday, Jefferson Circuit Court Judge Mitch Perry granted abortion facilities in the Bluegrass State a temporary injunction against enforcement of two pro-life measures, a heartbeat-based abortion ban and a general abortion ban designed not to take effect until Roe was overturned, which together effectively prohibit nearly all abortions.

Perry claimed there was a “substantial likelihood” that the laws “violate the rights to privacy and self-determination” as well as to equal protection and religious freedom under the Kentucky Constitution, and suggested that the trigger law was “unconstitutionally vague” and an “unconstitutional delegation of legislative authority.”

Republican state Attorney General Daniel Cameron rejected Perry’s assertions about the state’s constitution. Cameron has previously argued that the “non-enforcement of even ordinary statutes amounts to irreparable harm. The non-enforcement of the Human Life Protection Act and Heartbeat Law amounts to something far more grave. These laws prohibit what the General Assembly has determined is the unjustified taking of unborn human life. So every day that these laws are not enforced is a day in which unborn children of the Commonwealth perish.”

The ruling reflects plans pro-abortion activists have mulled for years to root abortion-on-demand in state constitutions rather than the U.S. Constitution, to insulate it from action by the U.S. Supreme Court. Of particular note is Perry’s assertion that the laws’ premise of life beginning at conception is “a distinctly Christian and Catholic belief,” enforcement of which constitutes an establishment of religion.

“Other faiths hold a wide variety on when life begins and at what point a fetus should be recognized as an independent human being,” Perry said. “The laws at issue here, adopt the view embraced by some, but not all, religious traditions, that life begins at the moment of conception. The General Assembly is not permitted to single out and endorse the doctrine of a favored faith for preferred treatment.”

The judge was invoking a common trope of pro-abortion apologetics, presenting prenatal life as a purely theological concept rather than a question of empirical fact. In reality, long-settled biological criteria and mainstream medical textbooks establish that a living human being, structurally and genetically distinct from his or her mother, is created upon fertilization and is present throughout the entirety of pregnancy. This is not in serious dispute; in 2019, University of Chicago Department of Comparative Human Development graduate Steve Jacobs found that 96% of more than 5,500 biologists he surveyed agreed, despite overwhelmingly identifying as “liberal,” “pro-choice,” and Democrats, and a majority identifying as “non-religious.”

While it is true that the Judeo-Christian tradition teaches that human life is sacred, and religious Americans are deeply involved in the pro-life movement, that is a statement on the value of all life, which has been applied to a wide range of human- and civil-rights causes throughout history, not a statement of when life is present.

Moreover, Perry’s logic could just as easily be applied to any number of legal tenets shared with major religions, such as prohibitions against stealing or killing after birth.

Roe’s overturn sparked the activation of numerous pre-Roe abortion bans that had gone unenforced for decades, as well as more recent pro-life laws that had been blocked by courts, and trigger laws designed not to take effect until Roe was reversed. Across the country, abortion giant Planned Parenthood has suspended abortions and/or closed locations in reaction to the ruling, and pro-life attorneys general have declared their intentions to enforce their states’ duly-enacted abortion prohibitions.

But leftists prosecutors in dozens of localities have vowed not to enforce such laws, ensuring that work and debate will continue over the prospect of banning abortion nationally. Pro-abortion activists’ emphasis on supporting interstate travel for abortion also presents a challenge to pro-life policymakers, though groups such as the Thomas More Society and National Association of Christian Lawmakers are currently exploring potential solutions. President Joe Biden has called for electing more Democrats to Congress to support codifying a “right” to abortion-on-demand in federal law.

It remains to be seen how arguments like Perry’s will fare in the courts. Amending state constitutions to clarify they do not protect abortion is generally much easier than amending the national Constitution, although Kentucky Republicans have tried and failed to pursue such amendments in the past.