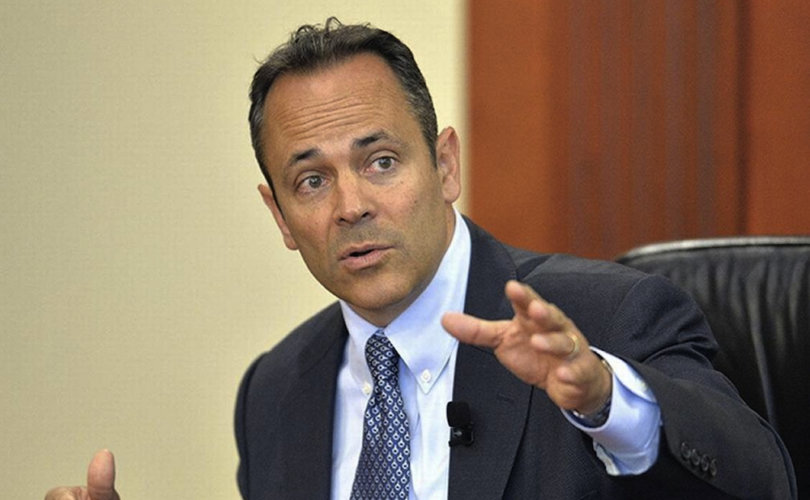 FRANKFORT, March 14, 2019 (LifeSiteNews) – Kentucky’s Senate voted Wednesday to pass legislation that would ban abortions driven by discrimination against certain characteristics of the preborn child, sending it to Republican Gov. Matt Bevin’s desk and setting the stage for another legal battle.

Introduced by Republican state Rep. Melinda Gibbons Prunty, House Bill 5 would ban any abortion sought on the basis of the baby’s race, sex, color, national origin, or disability. Abortionists would be required to certify they were unaware of any such motive before aborting. Violators would be guilty of a Class D felony (punishable by 1-5 years in prison), see their medical licenses revoked or suspended, and be potentially liable for civil damages.

The state House voted 67-25 to pass the bill last month, and now the Senate has passed it 32-4, CBS affiliate WKYT reports.

“All human life has intrinsic value,” Prunty declared. Last month she argued that the bill would simply extend to the preborn the “15 clauses that protect the sanctity of life and civil rights” in current law.

Also last month, University of Notre Dame developmental psychologist and public policy fellow Mary O’Callaghan testified before the House Committee on Veterans, Military Affairs and Public Protection that an estimated 70% of Down syndrome-diagnosed pregnancies end in abortion. “Make no mistake, preventing these children’s births through abortion is prenatal screening’s ultimate goal,” she warned.

The left-wing American Civil Liberties Union (ACLU) quickly announced it would be suing to block the law from being enforced, with ACLU of Kentucky staff attorney Heather Gatnarek calling it a “thinly veiled effort of the Kentucky General Assembly to advance their anti-abortion agenda under the guise of an anti-discrimination bill” that “will do nothing to improve the lives of Kentuckians with disabilities.”

Bevin took to Twitter to respond to the ACLU with defiance. “Bring it!” he wrote. “Kentucky will always fight for life.”

Kentucky will always fight for life…

Two days earlier, Bevin wrote an op-ed blasting Democrat Attorney General Andy Beshear for refusing to defend Kentucky’s previous pro-life laws from legal challenge, vowing that his own legal team will continue to “fight with all of our intellect, our talent, and our heart to defend the innocent.”

The battle between Kentucky and the ACLU may ultimately prove to be moot, as the law’s fate could be decided much sooner if the U.S. Supreme Court decides to hear arguments regarding a 2016 Indiana law that includes the same limits.