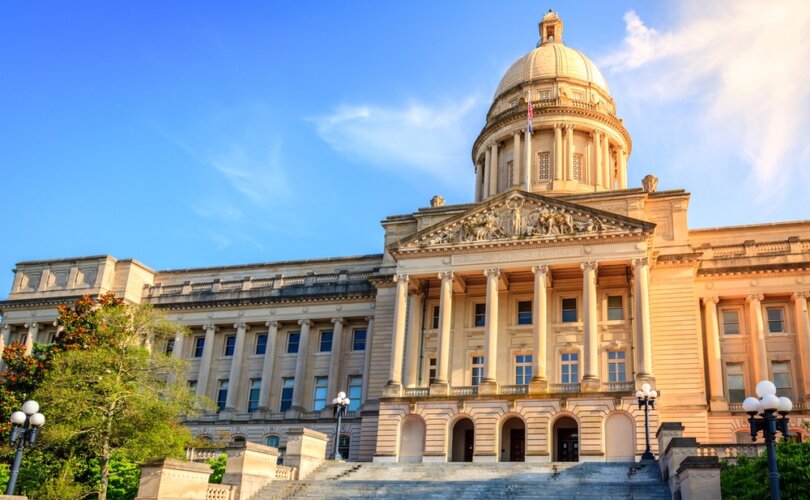 FRANKFORT, Kentucky (LifeSiteNews) — Kentucky’s highest court heard arguments Tuesday regarding a trigger law that bans abortion statewide. The move comes after Kentucky voters rejected a ballot proposal last week that would have enshrined protections for the preborn in the state’s constitution.

The hearing, which was closed to the public over safety concerns, came in response to a lawsuit filed by Kentucky’s last remaining clinics, the Courier-Journal reported.

The abortionists are challenging the constitutionality of Kentucky’s heartbeat bill and its 2019 trigger law that took effect immediately after the U.S. Supreme Court overturned Roe v. Wade, effectively banning nearly all abortions in the Bluegrass State without exceptions for rape or incest.

The law makes Kentucky one of more than a dozen states to prohibit abortion statewide with only narrow exceptions.

Opponents of the law say it violates a woman’s right to privacy, which they say is implicit in the state’s constitution, while the law’s backers say the constitution contains no protections for abortion.

A week after Kentucky voters rejected an anti-abortion ballot measure, the state’s Supreme Court on Tuesday weighed the constitutionality of a statewide ban approved by the Legislature in a case that seems destined to become a defining moment for… https://t.co/aek4nNj2rz

During the Tuesday hearing, Deputy Chief Justice Lisabeth T. Hughes said the Court’s decision to take up the case means it will examine the constitutionality of a full-on abortion ban for the first time.

Hughes also brought up Kentucky’s ballot initiative to enshrine protections for the unborn (Proposition 2), which failed by a margin of 47.62% to 52.38% last week. In her remarks, the judge characterized ballot measures like Proposition 2 as “the purest form of democracy.”

“It is the people themselves speaking,” she said, suggesting the results of the initiative should have bearing on the Supreme Court’s decision.

The justice also “pressed the attorney defending the abortion ban on why the vote shouldn’t have an impact,” on the Supreme Court’s handling of the statewide abortion ban, the AP reported.

However, Solicitor General Matthew Kuhn, representing Kentucky’s office of the attorney general, rejected the idea that the proposition’s failure has bearing on the constitutionality of the state’s abortion ban.

“When it comes to abortion, our constitution here in Kentucky is simply silent,” Kuhn said, suggesting the regulation of abortion should be left up to the state legislature.

Kentucky Attorney General Daniel Cameron made a similar suggestion in a Tuesday statement, in which he affirmed that it’s “the responsibility of this office to defend the laws passed by the General Assembly.”

“We have asked the court to allow these pro-life laws to stand and to recognize that policy-making authority belongs to the General Assembly, not the judiciary,” he said.

My statement regarding our defense of Kentucky’s Human Life Protection Act before the Supreme Court of Kentucky: pic.twitter.com/9fnNp6xnBu

An attorney backing the state’s pro-life law said the court shouldn’t “create the Kentucky version of Roe v. Wade,” the AP reported. In Roe v. Wade (1973) the U.S. Supreme Court which interpreted a federal “right” to abortion from a “right to privacy” which they interpreted to exist in the Constitution, though there is no right to privacy named in the document or the Bill of Rights.

The Supreme Court’s decision to take up a challenge to the law has caused pro-life Kentuckians to see the need to stay in the fight, even in states like Kentucky with far-reaching abortion bans.

“A lot of people think: ‘Well, Roe was reversed and we have a trigger law, so, therefore, game over, we’re done,’” Marina Mason with Students for Life told Politico.

“We’re trying to say, ‘Guys, don’t get too comfortable and assume that we did it and we can all go home,” she said. “Just because we have these laws in place right now doesn’t mean they’re going to stay forever.’”

The Courier-Journal reported that it remains unclear when Kentucky’s Supreme Court will hand down a ruling on the constitutionality of the state’s abortion ban. However, the outlet suggested the justices “could issue a decision quickly on whether to keep the abortion bans in place or temporarily block them.”