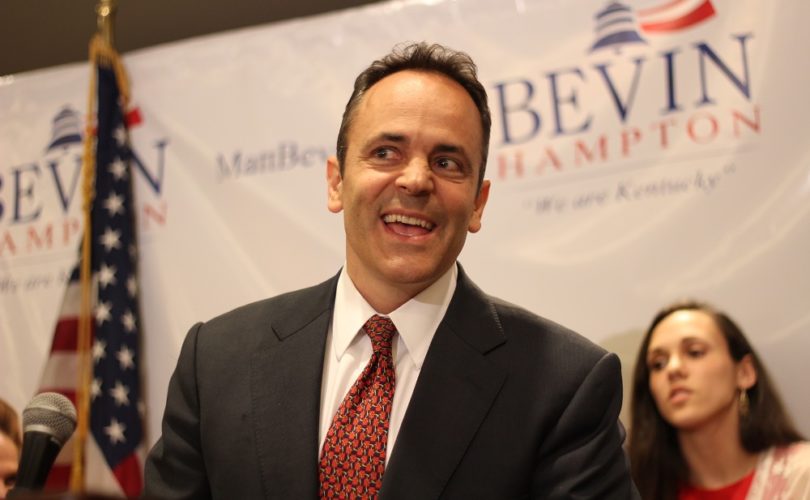 Matt Bevin signed an informed consent bill requiring that biological facts and medical information be given to mothers in person or by real-time video at least 24 hours before an abortion.

“The overwhelming support for Senate Bill 4 in the Kentucky legislature is a positive step toward protecting the emotional and physical health and safety of women,” Bevin said in a statement before signing the bill.

Bill supporters say the reason the bill was necessary is because many abortionists circumvent the law by having mothers listen to a prerecorded message over the phone.

The House passed Senate Bill 4 last week, with the option of a real-time video consultation, and the Senate gave final approval Monday.

Gov. Bevin chose this as the very first bill he signed into law. He put his signature to it as soon as legislators delivered it to him. The bill informing mothers of the medical and biological facts related to gestation and abortion becomes the Bluegrass State's first new pro-life law in twelve years.

Pro-life legislation was previously roadblocked by the Democrat-controlled state House.

Senate Minority Leader Ray Jones, a Democrat, supported the bill, calling it “long overdue” and saying  the issue was “not Democrat or Republican; it's right or wrong.”

Sen. Jones recalled seeing his son in the womb's heartbeat via ultrasound and said, “I knew he was a human being.”

Bevin was a Tea Party and conservative favorite who supported Rowan County clerk Kim Davis during her incarceration for refusing to sign homosexual “marriage” licenses. In fact, Bevin credits Davis in part for his election last November.

Among his first actions as Kentucky governor was to grant Davis a waiver removing her name from marriage licenses issued to same-sex couples.

“We have worked for over a decade to correct the obviously flawed interpretation and enforcement of the original bill that we passed in 1998,” said Margie Montgomery, executive director of Kentucky Right to Life Association. “We are grateful for the thousands of pro-life citizens across the commonwealth who, for years, have been active in the legislative and political process. We thank pro-life Republican Leadership in both House and Senate for working with us and, of course, our new pro-life governor! Elections do matter for women and their unborn babies.”

Fr. Frank Pavone, national director of Priests for Life, praised Bevin. “Kentucky is blessed to have a governor who leads by serving,” Fr. Pavone said. “Governor Bevin's immediate action to sign the new informed consent for abortion law is a great act of service –– not only to pregnant mothers, but also the state as a whole.”

“The more women know about abortion and its alternatives, the more women will choose life,” Fr. Pavone explained.

“Hopefully, the Kentucky legislature will deliver more pro-life legislation to Governor Bevin,” added Fr. Pavone. “His leadership is an encouragement to all Americans who seek a culture of life.”

Betty Cockrum, the leader of the regional Planned Parenthood affiliate, said the new law is “just one more barrier and one more burden to what is the constitutional right of women.”

According to the Associated Press, the bill allows a doctor to designate a licensed nurse, physician assistant, or social worker to represent him or her at the in-person or video consultations.