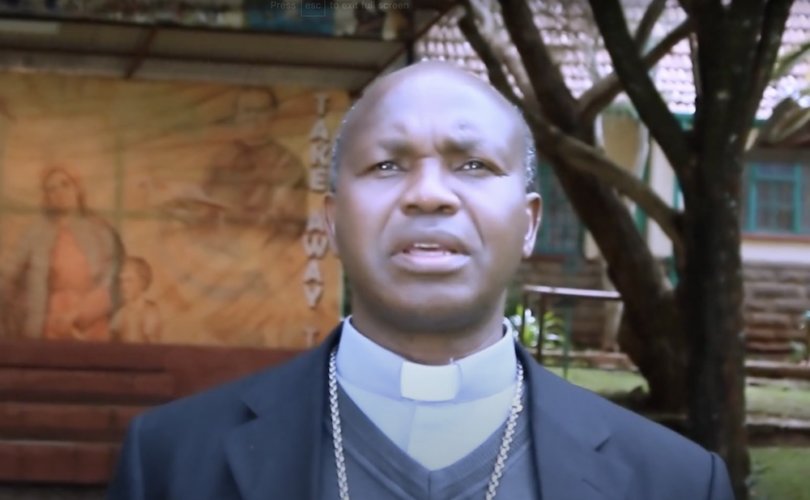 May 15, 2020 (LifeSiteNews) – As scientists race to develop a viable vaccine for COVID-19, concerns about the final product and its implementation have similarly grown. Now a Kenyan bishop is speaking out about the importance of carrying out testing in a safe and transparent manner.

“Whereas the COVID-19 pandemic is a grave matter at hand, it should not in any way be used to compromise the rights and dignity of the citizens” of Kenya, Bishop James Wainaina of the Diocese of Muranga said earlier this month, Catholic News Agency reported.

Bishop Wainaina was responding to reports that researchers currently developing COVID-19 drugs are planning on testing them in Kenya. The head of one such study, Dr. Loice Achieng Ombajo, says he got approval from one government review body and is awaiting word back from two others. But the bishop is concerned about the lack of public input on the approval process, as required by the country’s constitution.

“Vaccines or drugs may have side effects on the citizens,” he said, so “we must be convinced of the safety of the same and preservation of the citizens' dignity … Everything should be done with maximum openness, and testing should not be carried out on unsuspecting citizens.”

“All of us must remain vigilant to the foreign insurgences, including research agencies that plan to come and lure poor Kenyans with money, and instill fear of the disease in order to get people to agree to undergo trials of such vaccines and drugs,” Wainaina declared.

In the United States, many of those deaths have occurred within nursing homes, and mounting evidence suggests that far more of the public has contracted and recovered from the virus than the official count indicates.

In response, many states have imposed strict limits on “non-essential” activity, including delays of non-urgent medical procedures. As a result, hundreds of thousands of jobs have been lost, and steep declines have been seen in people seeking and receiving care for everything from cancer to heart disease. Now, concern is building about the mental health toll of the lockdowns.

A growing number of medical experts argue that, in light of the fact that COVID-19 primarily affects the elderly and immunocompromised, but poses relatively little risk to the young, policymakers should pursue a narrower strategy of protecting the former groups while allowing the rest of society to resume normal life. “If we focus on the elderly, we will bring a death rate that is likely no more than 1 percent down to fractions of a percent,” says Dr. Donald Yealy, chair of emergency medicine at the University of Pittsburgh Medical Center.

Nevertheless, some politicians, such as the governors of California and Illinois, have gone so far as to claim that normal life cannot resume until a vaccine or another form of cure has been developed and released.

While the media often fixates on parents who oppose vaccines over their potential for side effects (a subject of intense debate), they tend to overlook another group that generally supports vaccines in general while having an ethical conflict with vaccines derived from aborted babies’ cells. The Canadian government is currently working with the Chinese on one such vaccine.

Many are also concerned about the broader principles at stake, such as an individual’s right to decide how to best care for one’s self and one’s children.

LifeSiteNews has collected more than 395,000 signatures for its petition opposing the prospect of forcing people to take an eventual COVID-19 vaccine.

“The so-called ‘public health experts’ have gotten it wrong many times during the current crisis,” the petition argues. “You should not, therefore, allow their opinions to rush decisions on policy regarding mandatory vaccination.”

“If after sufficient study of the issue, a person who has reached the age of majority wishes to be vaccinated using a morally-produced vaccine, along with his children, that is his business,” it reads. “But we cannot and will not permit the government to make that decision for us.”