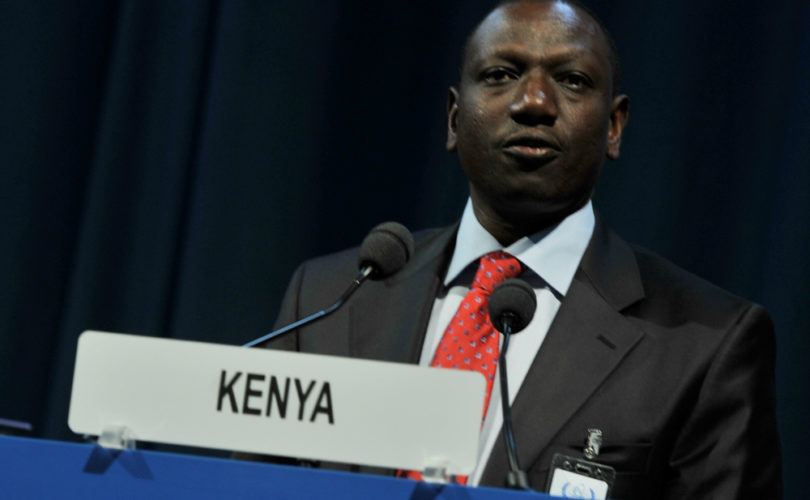 July 8, 2015 (LifeSiteNews) — Kenyan National Assembly Speaker Justin Muturi and four other legislators have warned U.S. President Barack Obama against promoting homosexual “rights” in his visit to the country this month.

“Individual rights must not violate the rights of others,” Muturi said. “Those advancing gay rights must similarly appreciate our Christian, Islamic and African traditional values which abhor homosexuality.”

Pointing out that sodomy is a criminal offence in Kenya, Muturi said his government has the right to “sanction any advances perceived to encroach on our social fabric” and that he believes advocacy of same-sex “marriage” is a form of Western ideological oppression disguised as human rights.

“Liberal thoughts are being entertained in some countries under the guise of human rights,” Muturi said. “We must be vigilant and guard against this, because we have a responsibility to our children, and our children's children. We must lead an upright society. We must not allow certain of these obnoxious practices.”

Woman Representative Rose Mitaru, who is also an ordained Canon of the Anglican Church of Kenya, urged Obama to confine his topics of discussion to issues, such as the state of the economy and terrorism, that would actually benefit the country. Promoting the legalization of same-sex “marriage,” she said, would open “floodgates of evil synonymous with the biblical Sodom and Gomorra.”

MP Cecily Mbarire said the government is ready to reject foreign aid if it was tied to acceptance of same-sex “marriage.”

“Our Constitution is very clear. Marriage is of two people of opposite sex,” she said. “The Constitution is against same-sex marriage and nothing should change [when Obama comes]. We are ready to decline any foreign aid if it is tied to gay marriages.”

Deputy President William Ruto told a church congregation on Sunday that they must take a stand for their faith, calling homosexual practices something that Kenya will not tolerate, according to the Daily Nation.

“Homosexuality is against the plan of God. God did not create man and woman so that men would marry men and women marry women,” Ruto said at the Africa Inland Church Ziwani in Nairobi.

“We have heard that in the US they have allowed gay relations and other dirty things. I want to say as a Christian leader that we will defend our country Kenya, we will stand for our faith and our country,” he added.

Urging both Christians and Muslims to defend their beliefs and values, Ruto stated, “No amount of persuasions, theories or philosophy will make us change our position. We believe in God, this is a God fearing nation and will continue to be so.”

Senator Lenny Kivuti announced that he would boycott the welcoming ceremony if Obama intends to promote homosexuality.

Another National Assembly member, MP Charles Njagagua, went so far as to say he would have Obama ejected from the House if he lectured MPs on gay “marriage.”