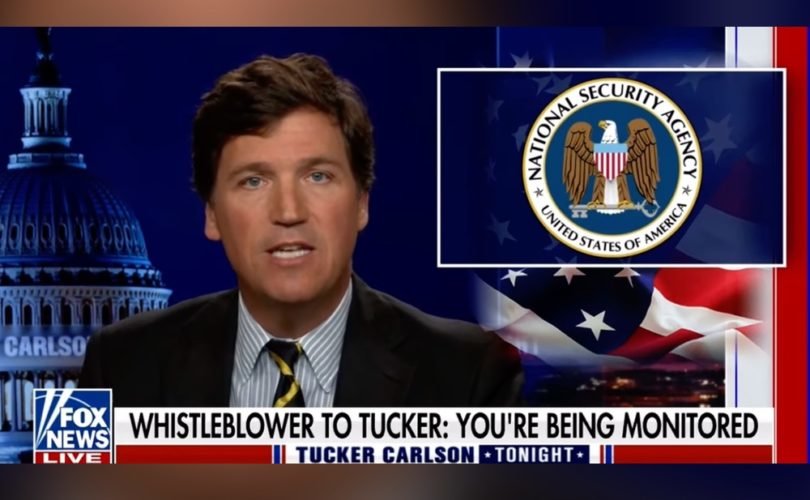 “Yesterday, we heard from a whistleblower within the U.S. government, who reached out to warn us that the NSA, the National Security Agency, is monitoring our electronic communications, and is planning to leak them, in an attempt to take this show off the air,” Carlson said Monday. “The whistleblower, who is in a position to know, repeated back to us information about a story we’re working on that could only have come directly from my texts and emails. There’s no other possible source for that information, period. The NSA captured it without our knowledge for political reasons.

‘The Biden administration is spying on us. We’ve confirmed that,” Carlson declared. He said he has filed a Freedom of Information Act request and called the FBI and NSA, but has not yet gotten answers.

“For the past several months, I have seen a disturbing trend at the National Security Agency,” McCarthy said Wednesday, Newsweek reported. “Now, there is a public report that NSA read the emails of Fox News host Tucker Carlson. Although NSA publicly denied targeting Carlson, I have serious questions regarding this matter that must be answered.”

“Given this disturbing trend, I've asked HPSCI Ranking Member Devin Nunes to investigate and find answers on behalf of the American people,” he continued. “The NSA cannot be used as a political instrument, and House Republicans will ensure accountability and transparency.”

The NSA responded by denying that Carlson was ever a “target” and that it had no “plans to try to take his program off the air.” Many noted that the statement appeared carefully worded so as not to specifically confirm or deny whether someone other than Carlson personally was being targeted (such as a show staffer, source, or interview subject), or whether someone within the NSA or another part of the Biden administration had sought data pertaining to him:

A statement from NSA regarding recent allegations: pic.twitter.com/vduE6l6YWg

Tucker isn’t the target—only incidental to the target.

The NSA doesn’t *currently* have plans to shut down his show.

The Tucker quote is two allegations, but NSA denies it as one, the motte and bailey technique.

✅ This statement is consistent with Tucker being monitored. https://t.co/jp9WFUVEhV

So Tucker has never been an “intelligence target”, but that doesn't answer the question of if his information has been incidentally collected by the NSA and if so, has there ever been any requests by other “agencies” to the NSA to unmask his information? https://t.co/X2GLR3GYVr

Per the segment I just did with @TuckerCarlson — @NSAGov doesn’t deny it has his work emails/texts — just that he isn’t a “target”. The rest of this is just “trust me” theater — remember the fairly recent lies of James Clapper, and John Brennan’s spying on AP journalists? ��️‍♂️ ��️‍♀️�� https://t.co/m8jlZD6LBf

Americans’ (particularly conservative Americans’) faith that the federal government will respect their rights has steadily deteriorated over the past several years. Things took a major turn under the Obama administration, from the IRS targeting conservatives to the FBI spying on the Trump campaign. The actions of the Biden administration thus far, such as suing states for attempting to secure their elections and promoting a narrative that conservatives are “extremists” whose issues are potential incubators for violence, have further intensified that mistrust.