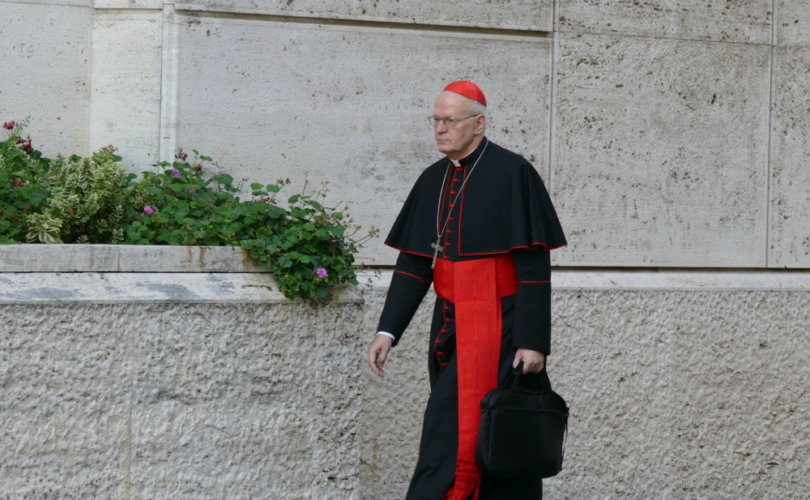 ROME, October 6, 2015 (LifeSiteNews) – In his opening plenary address on Monday to the Ordinary Synod, Pope Francis called for an “apostolic courage, which refuses to be intimidated.” Hungarian Cardinal Péter Erdő, General Relator of the synod, was not one to disappoint. In a ringing and lengthy address, Erdő championed Church teaching and discipline on the sanctity of life, marriage and human sexuality, and called for the synod fathers to reject the Kasper proposal to give Communion to divorcees in adulterous unions, and scrap the so-called “lifestyle ecumenism” of Cardinal Christoph Schonborn and Archbishop Bruno Forte.

At last year’s synod, Cardinal Erdő seemed caught unawares when he presented the scandalous mid-term Synod report, deflecting to Archbishop Bruno Forte to explain the supposedly “positive elements” in homosexual relationships, saying: “He who wrote the text must know what it is talking about.” At the opening session today, however, Erdő appeared to commit himself to closing those doors that Pope Francis and last year’s synod left open.

Erdő boldly rejected the notion of “lifestyle ecumenism” as an unacceptable instance of “gradualness of the law” declaring that “between truth and falsehood, between good and bad, there is no graduality.” Erdő resounded the synod hall with a restatement of the Church’s teaching in a 2003 document from the Congregation for the Doctrine of the Faith on homosexuality: “There is no basis for comparing or making analogies, even remotely, between homosexual unions and God’s plan for matrimony and the family.” Erdő insisted that even if “some forms of cohabitation…carry some positive aspects, [it] does not imply that they can be presented as goods.”

On the Kasper proposal to re-admit divorced and civilly remarried Catholics in a state of adultery to Holy Communion after a period of “penitence” without amendment of life, Erdő insisted that Church discipline on the matter is not an “arbitrary prohibition, ” but rather, it is an “intrinsic demand” of the sacrament, essential to “the Church’s witness,” as St. John Paul II’s and Pope Benedict XVI’s teaching on the matter made clear.  “The mercy of God offers forgiveness to the sinner, but requires conversion” to “practice continence through the strength of grace,” that is, abstaining from non-marital sexual activity. Erdő further underscored that Kasper’s “so-called penitential way” without amendment of life would contradict the “fidelity to the indissolubility of marriage” which requires that the Church help the faithful to repent from “concrete situations that are contrary.”

In an interview last week with the Hungarian newspaper Kath.net, Erdo said the synod fathers on the whole oppose the Kasper proposal, relating that “The majority is of the conviction that, according to the Church's law, whoever lives in an invalid marriage may not then go to Holy Communion.”

In his remarks, Erdő also reiterated the Church’s teaching on abortion, euthanasia and contraception as key to the defense of the family in the modern world.  “With regard to the tragedy of abortion, the Church reaffirms the inviolability of human life,” Erdő asserted, and “likewise…the right to a natural death.” Defending the Church’s teaching on contraception in Humanae Vitae, which many Catholic scholars argue the synod’s Instrumentum Laboris document undermines, Erdő said, “Openness to life is an intrinsic requirement of conjugal love.” Far from backing away from these unpopular teachings in the modern world, Erdő insists, “We should therefore continue to disclose documents of the Magisterium of the Church that promote the culture of life in the face of increasingly widespread culture of death.”

Although Erdő’s previous opposition to the Kasper proposal and other liberalizing reforms was known, his choice to lead off the synod on Monday criticizing at length and directly the most controversial agenda items at the synod speaks volumes about the gravity of the internal divisions among the synod fathers. “If we speak frankly to others about what we believe, we don’t have to worry about not being understood because we, too, are children of our time,” Erdő said, asking for clarity about Church teaching. “Even if not everyone accepts what we proclaim, at least our proposal will be comprehensible.”

Erdő’s decisive opening remarks contrasted with the more tentative and general remarks of Pope Francis at the opening of the synod. At points, the pope’s remarks seemed to favor the agenda to liberalize Church discipline, although he avoided taking clear sides. The Pope called for the synod fathers to have an “evangelical humility that knows how to empty itself of conventions and prejudices… that leads neither to finger-pointing nor to judging others, but to hands outstretched to help people up without ever feeling oneself superior to them.” The Pope continued that the synod fathers must be open to “the God who always surprises, the God who reveals himself to little ones, who hides from the knowing and intelligent; the God who created the law and the Sabbath for man and not vice versa; by the God, who leaves the 99 sheep to look for the one lost sheep; the God who is always greater than our logic and our calculations.”

With characteristic non-specificity, the Pope addressed the divisions among the synod fathers, warning them to avoid the extremes of, on the one hand,  “extinguish[ing] the light of truth in the hearts of men, replacing it with small and temporary lights”, and on the other hand, the “petrification” of some hearts “which, despite good intentions, drive people away from God.” Amid these “temptations,” the Pope urged “fidelity to the Magisterium, the good of the Church and the Salus animarum [the salvation of souls].” Francis also emphasized that the role of the synod is not to “make deals and reach compromises” but rather be a “protected space” to engage in dialogue between the Church’s “deposit of faith” and “the deposit of life” of Church discipline and the lived experience of modern Catholics. Francis explained that the “deposit of faith” is not “a museum to view…nor even something merely to safeguard, but is a living source.”

In a press conference after the morning session, when asked if his opening remarks sought to end discussion about the Kasper proposal, Cardinal Erdő responded, “The synod only begins now. … Further developments are always possible. … We’ll see.”

270 bishops are set to voice their opinions in the Ordinary Synod on the family this month from October 4-25, with Pope Francis having the final word. But Cardinal Erdő has sent a clear message that those who seek to liberalize Church teaching or discipline through further attempts at “rigging the synod,” in the words of Vatican journalist Ed Pentin, will encounter a zealous and faithful resistance.