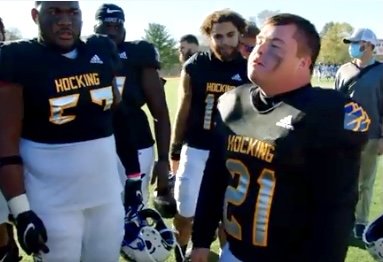 NELSONVILLE, Ohio (LifeSiteNews) – On September 11, Caden Cox became the first known person with Down syndrome in history to play and score a point in a college football game.

Caden’s mother, Mari Cox, told ESPN College Football that despite being told by a special needs counselor when Caden was in first grade that he would never go to college or even graduate from high school, she and her husband always encouraged Caden to “go for it” when it came to his interests.

From an early age, Caden was already practicing taekwondo, and he now has a black belt, his mother said. He played percussion in band, threw the shot put and discus in track and field, was on his high school dive team and football team, and he “was instrumental in helping start” a high school “inclusion club.”

Mari Cox shared how, having already played for his high school football team, “Caden was like, hey, why not try [college] football?”

Caden’s “natural choice” was Hocking College, where his mother works, his dad coaches, and older brother Zane once kicked. It is the only junior college in Ohio with a football program.

“And we saw that he could do that, and he was one of those young men that deserved an opportunity to get his degree and play football while doing it,” Egger said.

In games, Caden wears No. 21, which represents the 21st chromosome characteristic of Down syndrome.

It was during the third quarter of a home game against Sussex Community College on September 11 when Caden was given the opportunity to attempt an extra point that “made history.”

“He was beaming. He said, ‘I did it, mom!’” Mari Cox recounted. Caden shared how people told him it “was an awesome kick.”

Caden went on to finish the season “a perfect 4 for 4 in extra points,” and he “already had a name, image and likeness endorsement.”

He currently has his sights set on Ohio State University after he earns his associate’s degree.

“He has set a benchmark showing the parents of all these children born with these disabilities, anything’s possible,” Kevin Cox said. “That kid’s living proof.”

In 2015, the pro-life Charlotte Lozier Institute estimated that abortion reduces the Down community in the United States by 30%. It has been estimated that 90% of babies in Great Britain who receive a Down syndrome diagnosis are aborted, 65% in Norway, virtually 100% in Iceland, and 95% in Spain.

Despite the challenges of Down syndrome, a 2011 study published in the American Journal of Medical Genetics found that 99% of people with Down syndrome described themselves as “happy,” and only 4% of parents with Down children expressed regret about having their child. Yet around the world, Down syndrome is seen as a justification for aborting preborn children.

Earlier this year, the Sixth Circuit Court of Appeals upheld Ohio’s “Down Syndrome Non-Discrimination Act,” reversing an earlier ruling that had struck down the law. The Act “prohibits abortions chosen on the basis of a prenatal Down syndrome diagnosis.”

The sponsor of a similar law in Utah, state Rep. Karianne Lisonbee, told Deseret News as the bill was being considered, “In recent years there has been a shocking increase in abortions performed for no other reason than because a prenatal test identified the potential for a trait a parent didn’t like. For a society that claims to uphold tolerance and inclusiveness, it appears we still have a long way to go.”