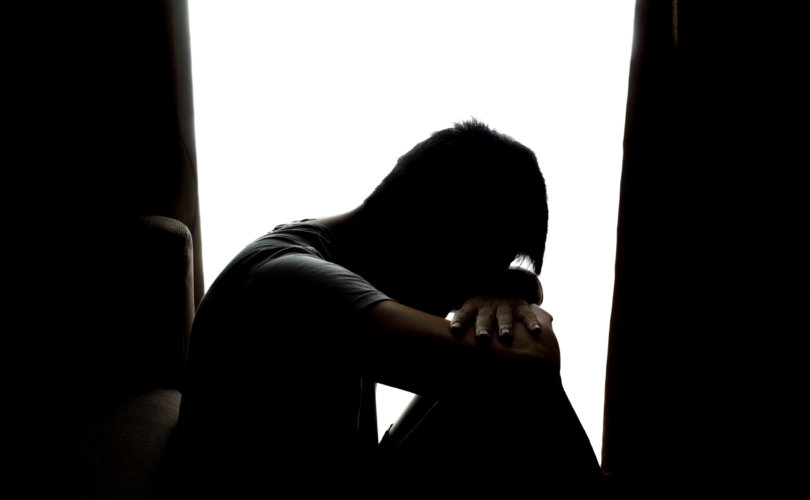 WASHINGTON, D.C., March 3, 2021 (LifeSiteNews) – On Tuesday’s Tucker Carlson Tonight, the eponymous host exposed many of the ills emanating from lockdown restrictions, including the devastating effect wrought on American children, whom he noted are now “10 times more likely to die from suicide than from the coronavirus they’re meant to be protected from.”

During a blistering opening monologue, Carlson referenced a recently published FAIR Health study, The Impact of COVID-19 on Pediatric Mental Health, which highlights the developments in the mental health of children as a result of locking down the country.

The statistics therein demonstrate that “kids are depressed and dejected and they are regressing.”

“The COVID-19 pandemic has had a profound impact on mental health, particularly that of young people. School closures, having to learn remotely, and isolating from friends due to social distancing have been sources of stress and loneliness,” Carlson said.

“Among children aged 13 to 18 – teenagers – insurance claims for intentional self-harm were up 90 percent in March of 2020 compared to the previous year. The next month, in April, self-harm cases rose by nearly 100 percent.”

Continuing, Carlson drew attention to the astronomical rise in “claims for medical help related to drug overdoses,” which rose by “95 percent in March and then to 119 percent in April, and those numbers remained elevated through the fall.”

“Why was this happening? Mental illness caused by coronavirus lockdowns.”

“For the age group 13 to 18 in April 2020, insurance claims for generalized anxiety disorder increased 93.6 percent. As a percentage of all medical claims in April of 2019, major depressive disorder claims increased 83.9 percent and adjustment disorder claims by 89.7 percent.”

Concluding from the above, Carlson made the grim observation that “children are 10 times more likely to die from suicide than from the coronavirus they're meant to be protected from.”

“That is the new normal that Andrew Cuomo and The New York Times are working to make permanent in this country,” he stated.

Carlson flagged the extreme-leftist teachers’ unions of America as perpetuating the lockdown problem, noting in particular the president of the Los Angeles Teachers’ Union, Cecily Myart-Cruz, who said, “Some voices are being allowed to speak louder than others. We have to call out the privilege behind the largely white, wealthy parents driving the push for a rushed return.”

Matt Meyer, the head of the Berkeley teachers’ union, also came under fire after it was revealed by a group of parents that he has been sending his children to private school for in-person education, defying his own public advocacy for the shutdown of public schools.

Speaking in January, Meyer said, “Real-life children do not keep their masks on, they do not keep distance from each other or their teachers. Given the realities of working with real children in person, we need to account for the inevitable lapses in risk mitigation practices by choosing a standard of lower transmission for reopening.”

Dr. Marty Makary, professor at Johns Hopkins School of Medicine and the Bloomberg School of Health, told Carlson that “public health research always lags behind reality. … We're going to see a lot of research come out on the restrictions, particularly against kids, and this is the first of many research studies and it looks pretty grim.”

Using the national FAIR Health study, Makary lamented the “91 percent increase in kids, Tucker, who come to us as doctors because they tried to hurt themselves at a time when all medical utilization has been cut in half.” He noted there has been a “300 percent increase in some parts of the country where there are very strict restrictions against kids and school closures.”

Makary added that there has been “a 63 percent increase in overdoses. Twenty-three percent of all emergency room visits at one point last year were from mental illness complaints.”

“This is the first of many studies that's going to tell us that many of these policies were basically an abuse by one group that has power over another group, and they exercise that power unfairly just because they could.”

Makary described the “fundamental problem” with accountability for locking down as a result of having “not looked at the totality of data on the health of kids and health consequences.”

“If you were to ask me if you left your home could you get bacterial meningitis, the answer will always be yes; but if people stay isolated there will be more health consequences against that individual, and as a scientist, you've got to look at the totality of data on health outcomes. Those CDC (Centers for Disease Control and Prevention) guidelines that came out, Tucker, they were flawed. They were filled with dogma, they contradicted top CDC scientists who published in the journal the American Medical Association three weeks prior that schools don't significantly contribute to transmission, and if they were applied to the airline industry, every plane in the U.S. would be grounded. Why is it that adults get to pack into planes, and they do it safely with masks, but kids are last in the reopening plan? That is an abuse of power.”

Carlson added that the reason for keeping schools shut is not the science, as has been demonstrated, but rather it is on account of the teachers’ unions that have “inordinate political power.”

Fox News senior political analyst Brit Hume told Carlson that “as powerful as I thought they (teachers’ unions) were, I did not realize they were powerful enough to do what they've succeeded in doing.”

“We saw the most recent manifestation of that when the director of the CDC came out and said, you know, that the science shows it's safe to reopen schools without everyone being vaccinated. And in a matter of hours, really, the Biden administration had come out and said, ‘Well, she (the director) was speaking for herself,’ which gave you a sense of how afraid the Biden administration, newly in power, is of what the teachers’ unions say,” continued Hume.

Hume laid blame on “the effect of the media coverage in particular, and of a lot of the pronouncements of public health officials as well” for the “nation's attitude” on allowing children back to school.

This narrative was, according to Hume, “very powerful and the sense of fear that it engendered in the American body politick has been the strongest thing we've seen, really, in terms of people's unwillingness to face the data as it became clearer and clearer.”

“Scientists have said, almost in (sic) the beginning, that this is a disease that way disproportionately affects the elderly and those with certain attendant comorbidities, and that everyone else was, if not completely safe against the disease, then largely so.”