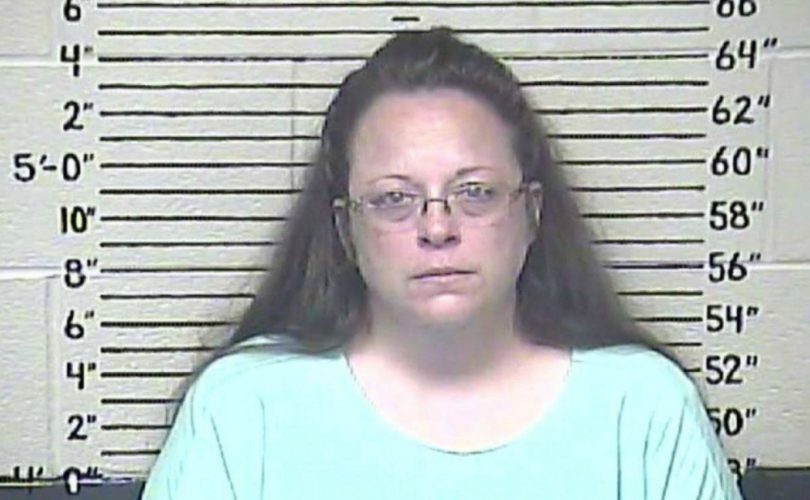 ROWAN COUNTY, KY, September 10, 2015 (LifeSiteNews) – Kim Davis isn't the only county clerk refusing to lend her name as an elected official to the U.S. Supreme Court's edict imposing homosexual “marriage” on the nation. Others are doing so without the media display, being sued, or ending up in jail.

A total of three Kentucky clerks have refused to issue “marriage” licenses to same-sex couples, along with nine Alabama counties, according to NBC News.

Davis has been made the face of resistance to judicial tyranny. None of these others has.

Davis was released from jail Tuesday after being incarcerated on a contempt of court charge last week, for declining based upon her religious beliefs to issue marriage licenses to same-sex couples.

Davis contended that putting her name as county clerk on the licenses was synonymous with her giving approval. She had refused to issue licenses to opposite-sex couples as well, so as to not discriminate against anyone.

Last Friday, the day after Davis was arrested, staff in her office began issuing marriage licenses, which Davis contended were invalid without her signature as county clerk.

GOP presidential candidate Mike Huckabee had scheduled a September 8 rally for Davis while she was in jail. Her release notwithstanding, the rally took place at the Carter County Detention Center in Grayson, Kentucky.

Davis, visibly moved by her supporters at the rally, spoke only briefly.

Davis's release from jail this week was contingent on her not interfering “in any way” with the issuance of marriage licenses to same-sex couples.

Her attorney was asked upon her discharge whether she would defy the court or authorize her clerks to issue marriage licenses to same-sex couples, the Courier-Journal reported.

Davis's status as a symbol of religious freedom may have come about simply by the luck of the draw, because her county happened to be where someone decided to make an example of a clerk.

In July, the Kentucky ACLU and the Fairness Campaign, a pro-LGBT group out of Louisville, “cast a net” in counties across the state that denied licenses, according to a report from The Guardian.

“But the only counties where plaintiffs responded to the request were in Rowan County,” said Fairness Campaign Director Chris Hartman. “Any of these county clerks could have become Kim Davis. It just so happened Kim Davis became Kim Davis.”

A spokesperson for the American Civil Liberties Union (ACLU), which filed the suit against Davis, said the ACLU currently has no plans to pursue legal action against the other two Kentucky county clerks refusing to issue marriage licenses to same-sex couples.

“We're focused on the Rowan County case at this time,” Allison Steinberg said.

Whitley County clerk Kay Schwartz said she has not been approached to issue a same-sex license, according to NBC. Schwartz told the State-Journal she's been bullied by people from outside her county because of her stance.

“There's a law against bullying and that's what this has turned into,” Schwartz said. “I've had a couple of calls and when I've looked those people up they didn't even live in my county.”

“If they had come to my county they would have driven past 52 counties that were issuing [marriage licenses], she continued. “It's nothing but bullying.”

The calls to her office came from people living in Oldham and Marion Counties, elsewhere in Kentucky, Schwartz said. Another call came from Tennessee.

“They call you names, say they are going to take your livelihood,” she recounted. “The males were very rude. I feel sorry that they would enjoy picking on someone when they can get what they want anywhere in the state of Kentucky, just about, or Tennessee or the surrounding states. They choose just two or three people to pick on.”

“Well, Kim's been sued,” stated Casey County clerk Casey Davis (no relation to Kim). “Kay nor I have been.”

Casey Davis has gotten threats over the phone for turning down homosexual couples' marriage license requests, but so far there has been no threat of legal action.

“I imagine it's possible,” Casey Davis said. “I know that there is a very real possibility, and if it comes, we'll deal with that when it comes.”

His approach has been the same as Kim Davis's: to decline issuing any marriage licenses at all.

“I'm actually [biking] across the state to show support to [Kim Davis] and to raise awareness of what's going on with this woman,” Casey Davis said.

“She's standing for God like she thinks she should and I think she should,” he continued. “I don't think a person should be threatened to be fined or threatened to go to jail because they're Christian.”

Neither Casey Davis nor Schwartz plans to change his or her mind on the matter or to relent to pressure to go against their conscience, even if there's the threat of being sued.

“I started out with nothing, and I'm surely gonna leave with nothing,” Casey Davis said. “So that's not a threat to me.”

“Why take away the majority's right to give the minority their rights?” said Schwartz. “The state of Kentucky, 74.5 percent voted for what they wanted, as did most of the nation. The people have spoken, and they have told the government what they want, but yet that didn't seem to matter as long as they make a few people happy.”