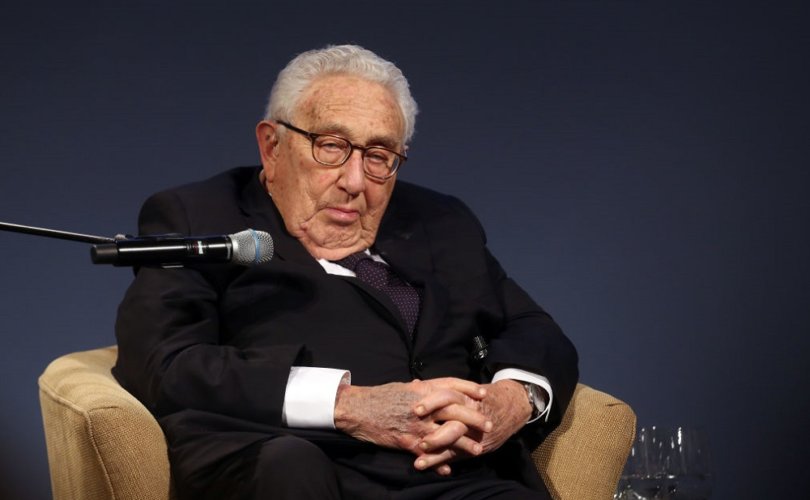 NEW YORK, April 6, 2020 (LifeSiteNews) ― A Nobel-winning American foreign policy expert has warned that the United States will have to join a global program to overcome the damage wrought by the coronavirus pandemic.

Henry Kissinger, 96, was the national security adviser and secretary of state for Presidents Richard Nixon and Gerald Ford. For the rest of his long career, he has served as an adviser to political and business leaders. The Wall Street Journal published the iconic political thinker’s response to the international health emergency on Friday, April 6.

Kissinger stated that “the world will never be the same after the coronavirus” and that the United States government will have to sustain “the public trust.”

“In a divided country, efficient and farsighted government is necessary to overcome obstacles unprecedented in magnitude and global scope,” he wrote.

“Sustaining the public trust is crucial to social solidarity, to the relation of societies with each other, and to international peace and stability.”

The former official stated that the current U.S. administration has done “a solid job in avoiding immediate catastrophe” but that its “ultimate test” is stopping the virus and maintaining “public confidence in Americans’ ability to govern themselves.”

At the same time, Kissinger called for the government to launch “a parallel enterprise for the transition to the post-coronavirus order.”

Coping effectively with the political and societal damage will take international collaboration, he warned.

“Leaders are dealing with the crisis on a largely national basis, but the virus’s society-dissolving effects do not recognize borders,” he wrote.

“While the assault on human health will — hopefully — be temporary, the political and economic upheaval it has unleashed could last for generations,” he continued.

“No country, not even the U.S., can in a purely national effort overcome the virus. Addressing the necessities of the moment must ultimately be coupled with a global collaborative vision and program. If we cannot do both in tandem, we will face the worst of each.”

However, Kissinger hinted at American leadership in this global endeavor by citing both the Marshall Plan, which helped to rebuild western Europe after its devastating by World War II, and the Manhattan Project, which beat Nazi Germany in the race to produce the first nuclear weapons.

“Drawing lessons from the development of the Marshall Plan and the Manhattan Project, the U.S. is obliged to undertake a major effort in three domains,” Kissinger wrote.

“First, shore up global resilience to infectious disease,” he continued.

“We need to develop new techniques and technologies for infection control and commensurate vaccines across large populations. Cities, states and regions must consistently prepare to protect their people from pandemics through stockpiling, cooperative planning and exploration at the frontiers of science.”

Kissinger next directed the USA to “strive to heal the wounds to the world economy” which he noted are “unlike anything ever known in history.”

“Programs should also seek to ameliorate the effects of impending chaos on the world’s most vulnerable populations,” he added.

Finally, the foreign policy adviser implored the USA not to abandon “the principles of the liberal world order,” saying that “prosperity depends on global trade and movement of people.”

“The founding legend of modern government is a walled city protected by powerful rulers, sometimes despotic, other times benevolent, yet always strong enough to protect the people from an external enemy,” Kissinger wrote.

“Enlightenment thinkers reframed this concept, arguing that the purpose of the legitimate state is to provide for the fundamental needs of the people: security, order, economic well-being, and justice,” he continued

“The pandemic has prompted an anachronism, a revival of the walled city in an age when prosperity depends on global trade and movement of people.”

Kissinger believes that “the world’s democracies need to defend and sustain their Enlightenment values.”

“A global retreat from balancing power with legitimacy will cause the social contract to disintegrate both domestically and internationally,” he stated.

“Yet this millennial issue of legitimacy and power cannot be settled simultaneously with the effort to overcome the Covid-19 plague. Restraint is necessary on all sides — in both domestic politics and international diplomacy.”

Kissenger warned that failure either to conquer the coronavirus or to build the post-coronavirus world order might lead to global catastrophe.

“The historic challenge for leaders is to manage the crisis while building the future,” he concluded.

“Failure could set the world on fire.”