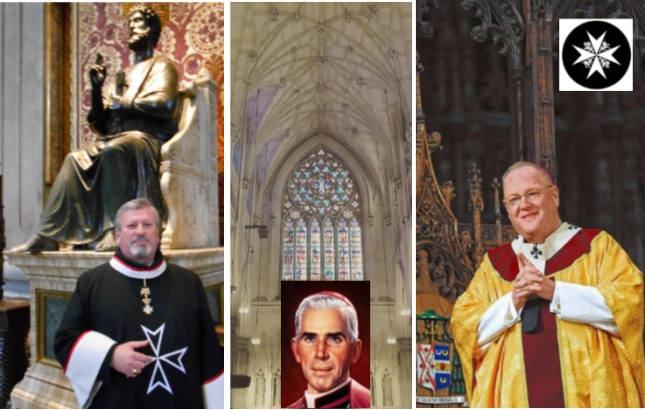 December 16, 2016 (LifeSiteNews) – A Knight of Malta has started a petition asking New York Cardinal Timothy Dolan to return Archbishop Fulton Sheen's body to his home diocese of Peoria, Illinois so that his cause for canonization may continue to move forward. Last month, the New York Supreme Court ruled in favor of Sheen's family, who requested that his remains go to Peoria, but his body still hasn't been moved due to an injunction the Archdiocese received as it appeals the decision. (VIEW THE PETITION HERE)

Raymond De Souza, a Catholic apologist, Knight of Malta, and pro-life activist, started the petition on LifeSiteNews's LifePetitions platform. He told LifeSiteNews that “the Archdiocese of New York would have everything to gain, and absolutely nothing to lose, in helping [Sheen's] beatification.”

The Diocese of Peoria has poured a significant amount of money into promoting Sheen's cause and has expressed its “complete disappointment” at the New York archdiocese's refusal to part with Sheen's body.

The Archdiocese of New York maintains that it was Sheen's “personal wish” to be buried permanently in St. Patrick's Cathedral in New York. Sheen's will expresses this, but his relatives say if he had known he would be canonized he would be alright with his body being moved. Even though he grew up in Peoria, Sheen spent much of his priesthood in New York. It is customary for bishops to be buried in their cathedrals, but because of the time and money the Diocese of Peoria has given to Sheen's cause, and the argument that he won't be canonized unless his body is moved back to Illinois, they are determined to fight for his body.

Sheen was an Emmy Award-winning televangelist and preacher who shared the truth of the Catholic faith with millions of people. His keen insights on internal crises of the Catholic Church during the 20th century can only be described as prophetic. Sheen's cause for canonization was officially opened in 2002, and he currently is considered “venerable” and having lived a life of “heroic virtue” by the Catholic Church.

“He was politically incorrect, he proselytized, he worked to bring everyone to the Catholic Church, he put into practice the exhortation of the first Pope, St Peter, who inspired the first Christians to present good reasons for their hope (1 Pet. 3:15),” De Souza told LifeSiteNews via email. “A canonized Fulton Sheen would be a breath of pure, fresh air to dispel the ambiguities of the false ecumenism that [have] infected the Church…Sheen’s teachings would help exorcise, as it were, the atmosphere of dissent against the moral and dogmatic teachings of the Church that are becoming commonplace today.”

Sheen's charm, holiness, and sense of humor have all aided his popularity even during the modern time, and he has a large, devoted following within the Church.

“Fulton Sheen was a luminary in this country in the defense of the Faith, a great pro-lifer, and naturally a model to be followed by every Bishop and priest in America,” said De Souza. “His ability to address religious and general human issues, even heresy and lukewarmness, with both logic and wit, was second to none.”

“Cardinal Dolan is the Principal Chaplain of Order of Malta in the United States,” De Souza explained. “As a Knight of Malta myself, I thought it would be perfectly in order to ask him to release the body of the venerable Archbishop so that the beatification process may soon be finished, to the joy of all faithful Catholic Americans.”

De Souza said it's a “mystery” to him why the Archdiocese of New York won't return Sheen's body to Illinois. He said the only contact he has had with Dolan was several years ago, at his investiture as a Knight of Malta and then at another knight's investiture.

“Cardinal Dolan’s sermon at [the second] Mass was simply excellent,” according to De Souza. “He spoke of the icon of Our Lady of Philermo, the Patroness of the Order of Malta, being taken by the knights into battle against the Islamic hordes, having being sprinkle[d] with blood in the fray. It was a truly epic description, which encourage[d] us Knights and Dames to stand firm for the true Faith. But today, in my opinion, he seems to have taken quite a different direction.”

“How could he possibly raise obstacles to the beatification of the great Apostle to whom Pope John Paul II said, 'You have written and spoken well of the Lord Jesus Christ. You are a loyal son of the Church'?” asked De Souza. Furthermore, “Sheen is the first native son of America to be raised to the honor of the altars,” meaning his canonization would be “an added glory to the Church in the United States!”

“The information that has come to me about his refusal is rather ambiguous, because it does not make sense to me to insist that Sheen’s body should remain in St Patrick’s Cathedral, while his beatification would benefit the whole Catholic Church,” De Souza told LifeSiteNews. “But ambiguity seems to be commonplace in the Church today, unfortunately.”

“The beatification of a true Defender of the Faith, a true Crusader, would be a glory for the Episcopate of the Catholic Church, in the midst of some many scandals,” said De Souza.

De Souza says the Archdiocese of New York “must acknowledge” the fact that “the Supreme Court of the State of New York ruled on Nov. 17 in favor of Archbishop Fulton Sheen’s family request to allow the transfer of his remains to Peoria, where he was raised and ordained a priest” and “the ruling is key factor in allowing his Cause for Beatification to move forward.”

“The Archbishop of New York must realize that he may be acting against the good of the Church he is supposed to promote, and, consequently, acting against the Will of God,” said De Souza. “This is my sincere opinion, and I pray that Divine Grace will touch his heart and change his mind.”

“Acquiescing” to the Sheen family's request would allow Dolan to show his desire “to see the great Archbishop honored and also encourage thousands of Knights and Dames of Malta, as well as Catholics in general, of every race, tongue and culture, to become more involved in the Defense of Our Catholic Faith, both in America and beyond,” said De Souza.

“Please, Your Eminence, do not delay the beatification of the great Defender of the Catholic Faith, who is the first native son of the United States in the process to be canonized a saint,” De Souza's petition asks.