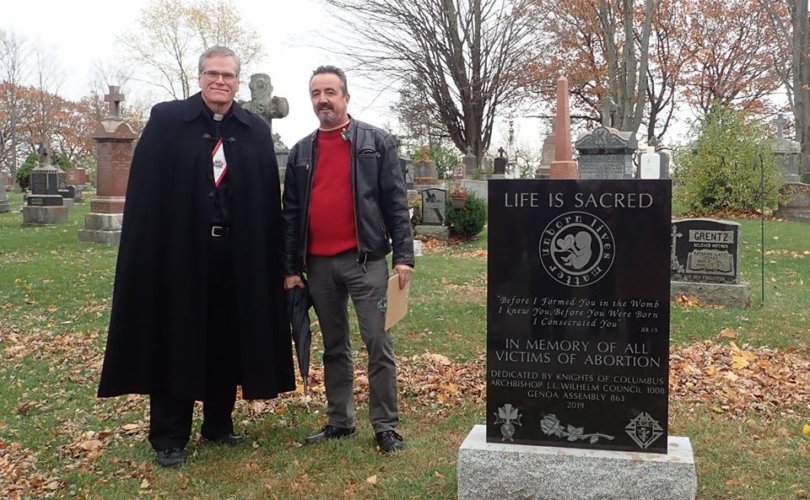 BELLEVILLE, Ontario, November 28, 2019 (LifeSiteNews) — A Knights of Columbus memorial recently erected in a Canadian Catholic cemetery for the victims of abortion has sparked social media backlash and accusations that a “patriarchal group” was “shaming women” in a story that gained national attention in Canada.

The Knights of Columbus Council 1008 in Belleville, Ontario — a town of about 50,700 on southern Ontario’s Bay of Quinte — posted photos on Facebook in early November of some of their members standing by the black gravestone in St. James Catholic Cemetery.

The three uncaptioned photos went viral and “gained almost 1,800 comments and more than 3,410 reactions. Sixty-six percent of people reacted to the images with a “Haha” or “Love” while about 20 percent responded with an “Angry” reaction,” reported the National Post.

“Can you believe this?” wrote Linda MacKenzie-Nicholas on Facebook.

“Knights of Columbus Belleville – Council #1008 (all men) organized this absolutely shameful act (dedicated this monument on November 2-2019) and also posted it on their facebook page.”

The inscriptions on the memorial read: “Life is Sacred” and “In memory of all victims of abortion.”

There is also the verse from Jeremiah 1:5: “Before I formed you in the womb I knew you. Before you were born I consecrated you,” and an illustration of a child in the womb surrounded by the words: “Unborn lives matter.”

The social media stir led to a Global News story on November 11, followed by a November 16 protest in downtown Belleville by a group called the Warrior Women of Quinte.

“The monument that was put up was attacking a woman’s right to choose,” Elissa Robertson, coordinator of the Warrior Women, told the crowd of 30 that reportedly grew to 50, reported inquinte.ca.

Moreover, the memorial for the victims of abortion “ties into patriarchal values and this idea that women’s bodies are meant to be controlled by men. It’s a broader issue that ties into violence against women, it ties into health care, it ties into safety,” Roberston contended.

Others, such as Sean McNeil of Canada Employment and Immigration Union, said the memorial implied women who had had abortions were criminals, according to QuinteNews.com.

“This is our belief and we don’t feel we’ve done anything wrong … it speaks for itself,”  he told the National Post, adding that the Knights were not debating the issue.

The Knights of Columbus, a worldwide Catholic fraternity, have put up 137 such gravestones across North America, added Cameron.

LifeSiteNews reached out to Cameron for comment but did not hear back by deadline.

Richard Beare, the secretary treasurer of St. James Cemetery, told Global News that the Knights applied to erect the gravestone, and the board in charge of the cemetery agreed.

The cemetery is run by thee Belleville parishes, St. Michael the Archangel, St. Joseph, and Queen of the Most Holy Rosary, reported Global News.

The Catholic fraternity deserves praise for witnessing to the sanctity of human life, says Gerry Brosso, a Knight of Columbus member in neighboring Gananoque and spokesman for Campaign Life Coalition, a national pro-life, pro-family lobbying group.

“They are fulfilling the mandate of the Knights of Columbus, being the right arm of the Catholic Church,” said Brosso.

“And it is important and it is incumbent upon all councils to stand up for their faith … rather than just meet, eat and retreat,” he added. “The fact that the Bellville people did this is laudable.”

It’s unfortunate the media focussed on the critics, observed Brosso.

“The minority are getting the most ink. This is a story about a monument for the unborn,” he told LifeSiteNews.

“Some people call it a political statement. No, it’s not,” Brosso said.

“There's nothing political about this particular monument … We honor those of our family who have deceased with markers in the cemetery. And we are honoring the lives of unborn children whose lives were terminated mercilessly.”

Heather Tapp, executive director of the Belleville Pregnancy and Family Care Centre, told the Belleville Intelligencer that the memorial could be a place of solace for post-abortive women.

“At the Belleville Pregnancy and Family Care Centre, we have worked with women who have had an abortion and self identify as experiencing grief following their abortion,” stated Tapp.

“For these women, this monument may be a source of comfort or a place where they could go to express their grief and loss,” she said.