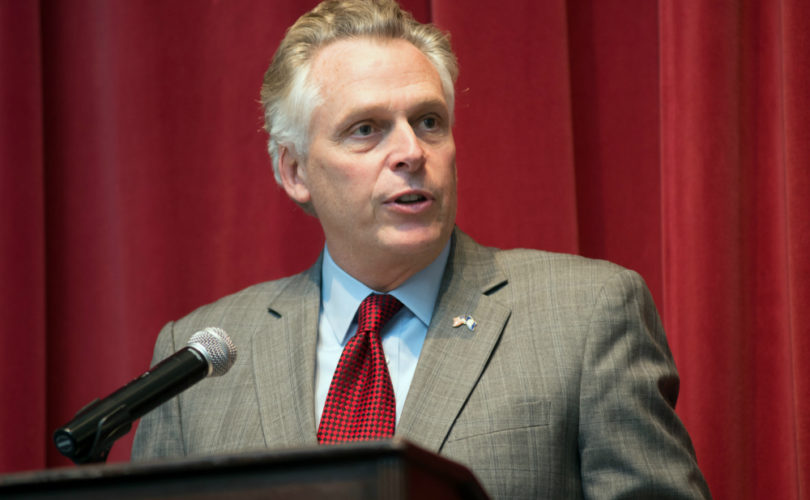 NORFOLK, VA, March 10, 2015 (LifeSiteNews.com) — A Virginia Knights of Columbus council is pressing forward with plans to honor pro-abortion, pro-homosexual “marriage” Gov. Terry McAuliffe by having him as grand marshal of its St. Patrick’s Day Parade. In response, the parish priest has strongly reproached the council and cut ties.

Norfolk Knights of Columbus Council 3548, which has organized the Norfolk Saint Patrick’s Day Parade since 1967, had secured McAuliffe as grand marshal, apparently keeping the choice from the pastor of Holy Trinity Parish, where the council is based. When Father Dan Beeman took it up with the state council on the advice of his bishop, he was told by the state council that another grand marshal would be chosen, a decision that was reversed ten days later.

“Governor McAuliffe stands contrary to the Catholic Church in not one but many of the most essential teachings of the Church in the political arena,” the Norfolk pastor wrote in a March 5 letter to parishioners, distributed at Sunday Mass on March 8. “He himself promised to be a ‘brick wall’ against restrictions on abortion, has taken away commonsense protections for women in abortion facilities and lowered safety standards, and consistently takes money from pro-abortion lobbying groups.”

“Further, he not only favors the re-definition of marriage, he himself performed a gay ‘marriage’ as soon as a court overturned the law of the Commonwealth,” Father Beeman wrote. “Marriage and Life are two of the foundational efforts of the Knights of Columbus as a national organization, so it is dumbfounding how the Knights could then decide to honor the Governor.”

Father Beeman was acting on the advice of Richmond Bishop Francis DiLorenzo in contacting the state council, he said, as well as in making the national office aware of the situation.

He had written the council last year at the request of one of the bishop’s vicars to request the committee keep the parade a non-political event and not honor any political candidate, office holder or former office holder above the city level.

“Politicians at those levels often make decisions about issues which Catholics hold as non-negotiable to our Catholic faith,” Father Beeman told his parish. “It was our strong urging that they not honor any political persons, but that if they did, they should not honor anyone who stands in opposition to the teaching of the Church on issues of life, marriage, or religious liberty.”

When he contacted the committee last year, also at the request of the bishop, he said, it was “to be sure that the Knights understood this is an important part of distinguishing our Catholic identity in public forums and awards.”

However, the Council 3458 parade committee had already chosen a grand marshal for 2014, someone who took public stances against Church teaching. Father Beeman met with them and after the discussions the committee chose another grand marshal.

It was late in the process this year when Father Beeman learned of the choice of McAuliffe as the 2015 grand marshal, via a bulk mailing from the Knights.

“I was saddened and shocked to learn only two weeks ago that the Knights of Columbus had, again, decided to give the honor of Grand Marshall to a politician,” Father Beeman said. “Going against their word to me last year, this year they decided to honor Governor Terry McAuliffe.”

While running for governor, McAuliffe said he would issue a directive to allow abortion clinics that do not meet state health standards to stay in business should he be elected. His campaign received significant financial support from various out-of-state pro-abortion forces.

Bishop DiLorenzo deeply upholds the Catholic principle of subsidiarity, Father Beeman said, which indicates that Church decisions be made at the lowest level possible. Father Beeman said he agreed with that and that the matter should be dealt with internally by the Knights.

“While it is a sad and unfortunate thing that the Knights would decide to allow this to continue against our request,” he said, “I have to consider that I have done my part as the pastor to teach the Truth of the Church and allow them to operate in freedom.”

Father Beeman plainly laid the issue out for his parishioners.

“It is the clear teaching of the Bishops of the United States in Catholics in Political Life that, ‘the Catholic community and Catholic institutions should not honor those who act in defiance of our fundamental moral principles,’” he wrote in his letter. “‘They should not be given awards, honors, or platforms which would suggest support for their actions’ (emphasis in original text).”

“There is a difference between respecting the Office of Governor and allowing the Governor to march in the parade and honoring the Governor by naming him the Grand Marshall and official host of the parade,” Father Beeman continued. “The Knights have chosen to act on their own, against the clear advice and teaching of the Church.”

Father Beeman said the parish would not take part in the parade and that the council’s actions had resulted in it ending its affiliation with the parish.

“As a result of their decision, the parish will not support or participate in the parade. I will not attend the Emerald Ball or Parade,” he said. “Sadly, this also unnecessarily severs the relationship between Council #3548 and Holy Trinity parish.”

Father Beeman expressed sadness at a the specter of the parade, a community event, being turned into something political, he acknowledged that not all of the Knights in the council agreed with or had a hand in the council decision to honor McAuliffe, and he commended those involved who stood with Church principles.

“I am grateful to those men for the support of what is right, and to Knights who are active members of the parish who stand for the truth,” said Father Beeman. “In a time where things of so much more importance exist, I am sad that this much energy has been devoted to something of this nature. Please pray for unity in the Church.”

Attempts by LifeSiteNews to reach Council 3458 were unsuccessful as of press time, also at which time the council’s website was live, but its Facebook page was in an inactive status.