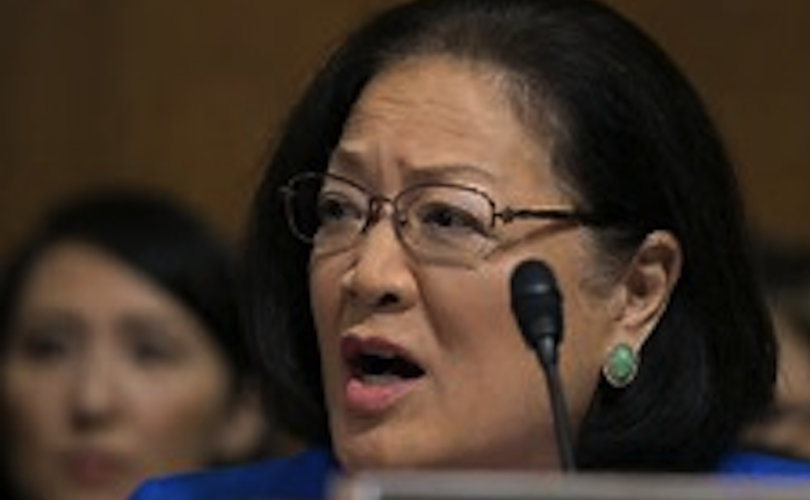 January 2, 2019 (LifeSiteNews) — Members of the Knights of Columbus in Washington, D.C., issued an open letter to U.S. Senators Mazie Hirono and Kamala Harris in response to questions posed by the two Democrats to Trump judicial nominee Brian Buescher suggesting his membership in the Catholic charitable organization means he is unable to hear court cases “fairly and impartially.”

According to letter from local councils of the Knights, “We recently read about statements which expressed the fear” that the group holds “many extreme beliefs.” Disavowing extremism, the letter said, “It is our great pleasure to assure you that this fear is not grounded in any truth” and explained that the Knights are dedicated to the principles of “charity, unity, and fraternity.”

In what their critics believe amounts to a religious test for office, Senator Hirono of Hawaii asked Buescher in December whether he would quit the Knights. Hirono said in her questionnaire to the nominee: “The Knights of Columbus has taken a number of extreme positions” and also wrote, “For example, it was reportedly one of the top contributors to California's Proposition 8 campaign to ban same-sex marriage.”

Senator Harris, who is also a progressive Democrat, referred to the Knights of Columbus “an all-male society” in her questionnaire. She asked Buescher whether he was aware of the group’s pro-life and pro-marriage positions.

In a response to Sen. Dianne Feinstein of the Judiciary Committee, Buescher wrote, “The Knights of Columbus does not have the authority to take personal political positions on behalf of all of its approximately two million members.” Buescher continued, “If confirmed, I will apply all provisions of the Code of Conduct for United States Judges regarding recusal and disqualification.”

The letter from the Knights of Columbus to Senators Harris, Hirono, and their staffs read:

“In the past few months, O'Boyle Council has worked with local parishes, including St. Peter's (House-side Catholic church) and St Joseph's (Senate-side Catholic church) to raise funds and give away over $4,000 worth of coats to neighborhood children, collect soda and beer can tabs to donate to the Lt. Joseph P. Kennedy Institute, which helps the developmentally disabled, and collect diapers and other supplies for new mothers in need. Over the course of the past year, we donated an ultrasound machine to a clinic, picked up trash around Nationals Park, and donated supplies to a local school. We do all this as well as social gatherings and spiritual events. We hope this list of activities help to assure you that we are simply a group aiming to do God's work while building friendships.

“We wish to formally invite you all to join us for any social or charitable event. In fact, this February we are doing the Polar Plunge to raise funds for DC Special Olympics.  You and anyone you know are more than welcome to join us either jumping in the cold water or sponsoring our team. Our team's page can be viewed at https://give.specialolympicsdc.org/kofc. Additionally, if any Catholic men on your staff are interested in joining O'Boyle Council for charitable and social events, they can find more information on our website at https://oboyle.dcknights.org/ and Facebook page at https://www.facebook.com/KofC11302/. If you have any further questions or concerns, please reach out to us at [email protected] Thank you for this opportunity to write to you. We pray that you have a wonderful Merry Christmas and a Happy New Year!”

In response, Republican Sen. Lindsey Graham of South Carolina tweeted on Christmas Eve, “Hopefully, in the eyes of Democrats you are not disqualified to a be a judge because of your religious affiliations and beliefs.” In a follow-up, he wrote: “Will not tolerate disqualifying judicial nominees because of charitable works and personal religious opinions.” The office of Sen. Orrin Hatch, a Utah Republican, tweeted: “Alarming questions from Senate Democrats, showing they are getting more and more comfortable with imposing religious tests on Federal judicial nominees.”

Rev. Eugene F. Rivers III, a civil rights leader and the director of the Seymour Institute for Black Church and Policy Studies, said in a statement that he fears for the status of people of faith in the United States. “There is no place for a religious test like this in our country,” he said. “Our constitution forbids it and elected leaders should know better than to try to impose it.”

Ken Blackwell, who served as U.S. Ambassador to the United Nations Human Rights Commission, condemned the Democrats’ statements. He said in a statement, “This is the kind of thuggish behavior we expect from third world dictators, not United States Senators.”

Within Article VI of the U.S. Constitution is the clause that forbids any federal office holder or employee from being required to adhere to or accept any particular religion or doctrine as a prerequisite to holding a federal office or a federal government job. The so-called No Religion Clause follows a clause requiring all federal and state officers to take an oath to support the Constitution. This is the only explicit reference to religion in the original seven articles of the U.S. Constitution.

The Knights of Columbus has two million members. Founded in 1882, it was formed to offset anti-Catholic activity on the part of groups such as the Ku Klux Klan.