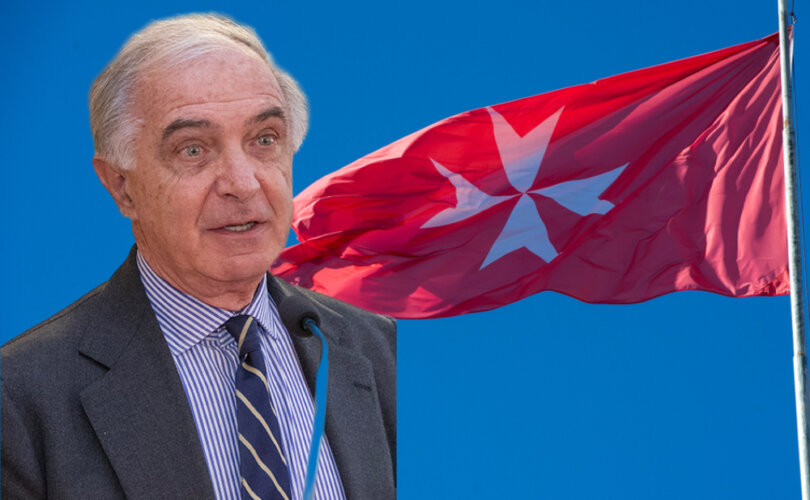 ROME (LifeSiteNews) — The Knights of Malta affirmed to members that the changes Pope Francis recently made to the Order are permanent and not up for discussion, signaling that the long power struggle between the Holy See and the Order is nearing completion.

The information was contained in a letter sent to members of the Sovereign Order of the Knights of Malta in recent weeks by Riccardo Paternò di Montecupo, the Order’s Grand Chancellor and Minister of Foreign Affairs and a member of the new Sovereign Council recently established by Pope Francis.

Sent from the Order’s palace in Rome at the end of October, di Montecupo wrote about the surprise intervention Francis made on September 3, dissolving the existing leadership and constitution and promulgating not only a new Constitution and Code of the Order but also a new Sovereign Council.

Di Montecupo’s letter highlighted the extent of the Papal takeover of the Order, which is not only a military, lay religious order but a sovereign entity in international law, maintaining diplomatic relations with a number of countries, along with having a seat as a permanent observer at the United Nations.

Referring to Francis’ new Charter and Code, di Montecupo wrote, “This Charter and this Code must be applied and cannot be, either now or at the next Chapter General in January, discussed or even amended.”

“However,” he added, “the spirit of the Charter is to enable us to continue to operate in a context of renewed and emphasized spirituality.”

Continuing, the new Grand Chancellor attempted to assuage any concerns members might have about the actual sovereignty of the order, after what amounts to nothing short of a papal coup.

The Special Delegate of the Holy Father and the Grand Magistry are providing all of you with further interpretative elements to help you grasp the true meaning of the Charter and Code, which, in some of their individual articles, could give rise to doubts in their application.

He added that while the Charter could not be amended, what would be permitted to be altered should a need arise were “certain technicalities, or even typos, that require ad hoc intervention.”

Expanding upon the widespread implementation and submission of the Pope’s new Charter that the Order was to practice, di Montecupo added that any “possible amendments or substantial changes to articles or paragraphs” would be the subject of a potential “Extraordinary Chapter General.”

This would, after some years, petition the Pope to be permitted to make changes in light of “relevant needs that have emerged in the meantime, and that do not find an easy solution in the current Charter and Code.”

Speaking to LifeSite under condition of anonymity, a “longstanding member” of the Order said that “it has grown increasingly difficult to remain as the last vestiges of our noble history and identity are tossed into the dustbin by leaders who are either complicit or too weak to call out the hostile takeover instigated by the the most corrupt and heretical pontiff in the history of the Catholic Church.”

The member stated that the Order’s members “are called to Defend the Faith and serve the Sick and the Poor and there is no poverty more lethal than spiritual poverty.”

Continuing, he added that the Order was being transformed into “another globalist NGO,” stating:

Francis’ has a distinct hatred of hereditary nobility, something shared by many Americans within the order who favor his reforms in order to turn it into essentially another globalist NGO. That is the motive behind removing this requirement for leadership.”

The member also highlighted the Latin Mass restrictions which the Order’s hierarchy imposed. “In almost a foretaste of Traditiones Custodes, an official letter was sent to members some time prior to this forbidding their official participation in the Traditional Latin Mass.”

“In essence, the Order has become a clearing house for the financial and theological misdeeds and objectives of the Franciscan pontificate whose over 900 year sovereignty is but a memory,” he said.

Order of Malta’s increasingly convoluted relationship with the Holy See

Di Montecupo’s letter underscores the true significance of Pope Francis’ September decrees, revealing that the Order has effectively lost the years-long ongoing power struggle that the Vatican has waged.

The Knights of Malta have been beset with high-level scandal and corruption for some years. In December 2016, then-Grand Master Fra’ Matthew Festing dismissed Grand Chancellor Baron Albrecht von Boeselager for his involvement in a program that distributed condoms. As LifeSiteNews reported at the time, Von Boeselager oversaw the distribution of condoms and oral contraceptives while he was Grand Hospitaller, the person in charge of the charitable work of the Order, through its international charity Malteser International. He was also at the time a member of Malteser International’s board.

However, Francis and Secretary of State Cardinal Pietro Parolin then intervened, with Francis directly ordering Fra’ Festing to resign, after von Boeselager complained to Parolin. Von Boeselager was reinstated as Grand Chancellor.

Cardinal Raymond Burke, the Patron of the Order, was then de facto replaced as Francis tasked the now disgraced Cardinal Giovanni Angelo Becciu as the Holy See’s special delegate to the Order, assuming Burke’s responsibilities.

The Order’s “takeover” continued, with its leader banning the use of the traditional liturgy, or the Latin Mass, for liturgies taking place within the Order. Fra’ Giacomo dalla Torre del Tempio di Sanguinetto – who succeeded Fra’ Festing – employed phraseology later used by Pope Francis in Traditionis Custodes, and stated he was acting for “the cohesion and communion or the Order of St. John of Jerusalem of which Providence made me Grand Master.”

Further evidence of the Vatican’s wielding of power over the Sovereign Military Order was seen earlier this year. Cardinal Silvano Tomasi, who relaxed Becciu as Papal Delegate to the Order in 2020, repeatedly refused to allow a leading official to attend key meetings. Knight of Malta Fra’ Marwan Sehnaoui, the president of the Order’s Lebanese association, was appointed by the Order to serve as the chairman of the steering committee on constitutional reform.

However, Tomasi prohibited Sehnaoui from attending the two-day session of meetings on the Order’s Constitution, accusing the Knights of appointing a representative without seeking his agreement and accused them of “moving unilaterally.”

Only weeks before, Tomasi had promised in writing that “that it was never the intention of this commission, nor of the Holy Father, to undermine the sovereignty of the Order, which will be totally preserved.”

Fra’ Giacomo Dalla Torre then died in 2020, being succeeded by the Lieutenant to the Grand Master, Fra’ Marco Luzzago. However, when he also died suddenly in June 2022, the Pope moved in to appoint Fra’ John T. Dunlap as Lieutenant to the Grand Master and acting head, without involving the leadership of the Order – a move that was not accounted for in the Constitution at the time.

The struggle for power between the Order and the Vatican now appears to rest ever more firmly in the Vatican’s hands. With clarity in the situation as hard to find as the sequence of events is confusing to follow, the struggle for the Order’s very identity now remains at stake.