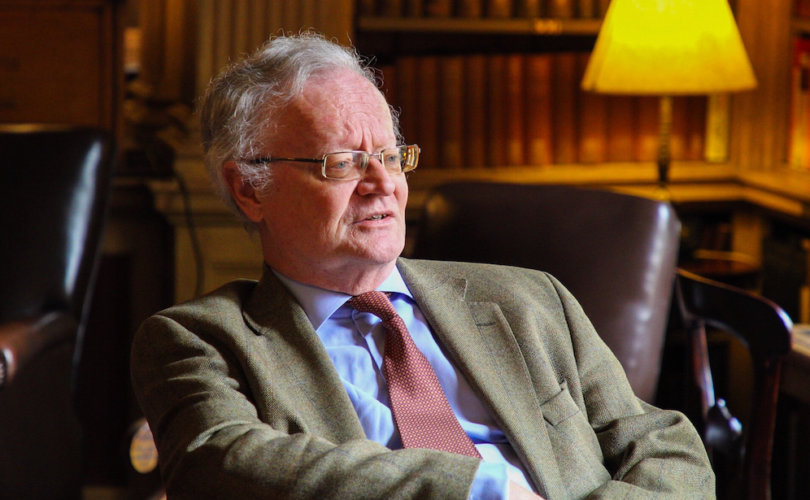 ROME, Italy, November 22, 2018 (LifeSiteNews) – The author of a book critical of Pope Francis has been expelled from the Order of Malta.

The Knights of Malta suspended historian Henry Sire in March for allegedly breaching their constitution. The suspension came soon after Sire’s identity was revealed as the author of The Dictator Pope, a scathing analysis of the Francis papacy including a look at his life before becoming pope.

Sire, who said his book was intended as an “alarm call,” had originally self-published the book under a pseudonym due to, he said, Francis’ “tendency towards vindictiveness.” His identity was later released when Regnery Press posted his name and background on an online description of the book.

Sire said at the time the suspension was illegal and null under the Order's rules, and maintains the move to oust him is without merit.

The party responsible for his expulsion, Sire said, is the Order’s Grand Chancellor, Albrecht von Boeselager, and the expulsion is being pushed through without due process.

“The suppression of all dissent is an integral part of the regime Baron Boeselager conducts,” Sire told LifeSiteNews, “and his forcing my expulsion through the Sovereign Council is in character.”

Sire said Boeselager, who was reinstated through an extraordinary intervention of the Vatican Secretary of State after he’d been dismissed by the former Grand Master Fra Matthew Festing for acts contrary to the Order's Catholic duty, “has exercised a despotic control over the Order” since his return.

The Order’s communication office provided a statement to LifeSiteNews that said, “Following the unanimous decision of the Sovereign Council of the Sovereign Order of Malta, Henry Sire has been expelled from membership in the Order.”

The decision came during an October 17 meeting of the Order’s Sovereign Council, the statement said, after documents were presented by the Disciplinary Commission set up in March to investigate the matter of Sire authoring the book. The work of the Disciplinary Commission had run from April until October, according to the statement, and included “exchanging several letters with Henry Sire.”

The Order’s statement concluded, “His conduct, in having written the book ‘The Dictator Pope’, was thus considered by the Sovereign Council incompatible with membership in the Sovereign Order of Malta, one of the oldest lay religious order [sic] of the Catholic Church.”

When the Order suspended Sire in March, a statement via its website called the book a “vile attack against the Pope.”

The expulsion decree says that while canon law acknowledges a right to public comment on the Church, it also says that commentary must show “reverence” to “pastors,” and be “attentive to common advantage and the dignity of persons,” a report from the Catholic Herald said. It says further that Sire stepped over the line.

In a statement after the expulsion, Sire said that he wrote the book “for the good of the Church, in defence of the Faith and in obedience to the duty of a Christian to witness to the truth.”

That there has been extensive correspondence between Sire and the Knights in the matter is one thing Sire is in agreement on.

“I have provided, on my lawyer's advice, a very full defence to the charges brought against me,” he told LifeSiteNews.

Sire contends the decree ordering his expulsion from the Order falsely states that the Sovereign Council voted it for unanimously, and thus constitutes an outright falsehood incorporated in an official document of the Order.

“The question of my expulsion was never put to the vote,” he said. “It was simply presented to the Council as a fait accompli.”

The reason for this is easily explained, Sire said, by the fact his lawyers’ challenged the validity of the process based on numerous violations of the procedure contained in the Order's own Code. The move to expel him via legal process failed due to the self-defeating rush with which it was initiated, he said, and this left the Grand Magistry forced to cut through procedure and issue the expulsion by simple fiat.

The preamble to the expulsion decree states that his case has been referred back to the Grand Master by the Disciplinary Commission “owing to delays in the procedure,” according to Sire, who noted there were “None on my side, I can guarantee”.

“What this means is that the Grand Magistry realised that it was getting nowhere by legal process and decided to act by simple decree,” he added, “one moreover on which the Sovereign Council was not allowed to deliberate.”

This is where von Boeselager comes in.

While I say “the Grand Magistry,” Sire remarked, “it is well known that the man responsible is the Grand Chancellor, Baron Boeselager.

Von Boeselager was removed as Grand Chancellor of the Order in December 2016 on the grounds he violated his promise of obedience. He had refused to resign despite being asked to by his superiors, thus violating his vow of obedience and allowing the order to take disciplinary action.

Use of contraception violates the teaching of the Catholic Church.

There were also financial dealings in question under Boeselager’s tenure.

The pope’s move was controversial, as the Order of Malta, the world’s oldest Catholic chivalric order, is a sovereign state.

Senior members of the order called for von Boeselager to resign earlier this year after a German court had found him to be  “untruthful” in denying knowledge of condom distribution under his watch by the Order’s charitable relief arm.

Boeselager had in fact “knowingly procured” the condom distribution, three German judges had found, with “full knowledge and will.”

A leaked internal email said that Boeselager had “plunged the whole Order into its worst crisis for decades, if not centuries,” by going around the Order’s normal process and to the Vatican for help after he was suspended.

His behavior was dishonorable, the Knights said in the email, and should he stay in the position of Grand Chancellor, it would be a disgrace to the Order.

Lawyers for the Order’s Maltese charity also sent a cease-and-desist order late in 2016 to the Austrian Catholic news outlet Kath.net over its reporting on von Boeselager and his role as Grand Chancellor of the Order. A German court reversed the cease-and-desist order in September 2017, stating that the outlet’s reports were, in fact, accurate.

Earlier this year members of the Order were warned by leadership not to defend The Dictator Pope and to “swiftly” report members who make statements “offensive to the Holy Father.”

Sire has said via his statement that he will appeal the expulsion.