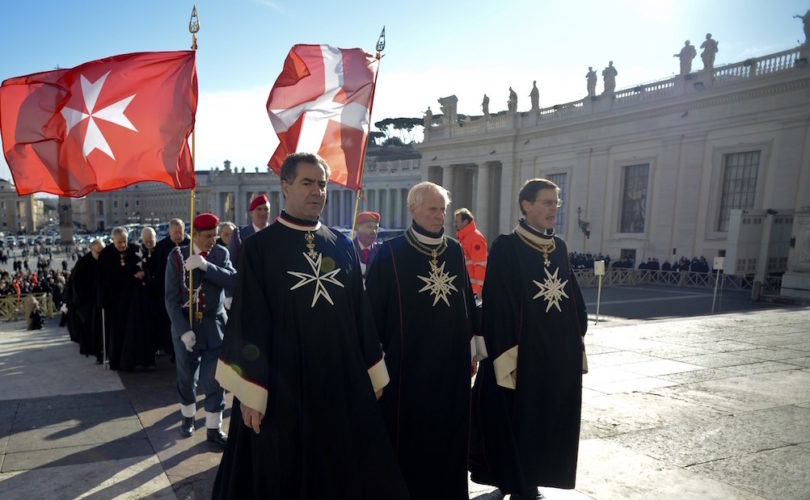 ROME, April 27, 2017 (LifeSiteNews) — Grassroots members of the Knights of Malta are directly petitioning Pope Francis as a crucial vote for a new leader looms on Saturday.

Members are signing on to an open letter launched by Maltese Knight Dr. Paul J. Camarata.

They say they want answers to their “serious questions and misgivings” that have arisen after Francis reinstated within the order a fired condom promoter, forced the Order’s head to resign, and effectively removed their patron, Cardinal Raymond Burke, from his post.

“The recent unfolding of serious events that have taken place over the past months regarding the Order of Malta have left many in perplexity,” they write.

“This has been exacerbated by the lack of reasonable explanation presented both to the faithful members of the Order and the public at large regarding actions taken by Your Holiness and Vatican officials,” the letter adds.

(Members of the Knights who wish to sign on can do so by e-mailing Dr. Camarata at [email protected].)

The letter comes three months after Francis became heavily involved in directing affairs of the Order, which is a sovereign entity and has no official connection to the Pope or the Vatican.

But in a series of surprise moves, Pope Francis demanded that Festing resign from his position, which he did, and went on to reinstate the official dismissed for peddling contraception. The Pope then stripped Cardinal Burke of his function, but not title, as the order’s patron, appointing Archbishop Angelo Becciu as his new delegate to the Order.

Members of the Knights are now asking the Pope for “valid clarification and explanation” of all that has taken place, stating that his actions “appear to compromise the Order’s mission, independent sovereignty, self-governance, and spiritual welfare.”

The members make special mention of their concern over Archbishop Becciu recently telling the Order’s former Grand Master Matthew Festing that out of “obedience” he must stay away from Rome during the upcoming election of his successor.

“This act raises questions about the proper jurisdiction of the Special Delegate with respect to all members of the sovereign Order, for it effectively places Fra’ Festing in a state of exile from Rome, it despoils Fra’ Festing of his rights as a member of the Order, and it harms the Order by interfering with a free election of the Grand Master,” the letter states.

News broke Wednesday that the Vatican has now reversed its decision and told Festing he may attend.

The petition to Pope Francis comes after an anonymous source dumped a host of confidential Knights of Malta internal documents online that confirm the extent to which the Pope involved himself in the affairs of the Order.

Included in the info dump is a letter from Pope Francis to Cardinal Burke dated December 1, 2016 in which the Pope asks the Cardinal to see to it that Freemasons are removed from the Order and that the Order “resolve” any distribution of contraceptives it might be involved in.

“Furthermore, the Order must ensure that the methods and means it uses in its initiatives and healthcare works are not contrary to moral law. If in the past there has been a problem of this nature, I hope that it can be completely resolved. I would be very disappointed if — as you told me — some of the high Officers were aware of practices such as the distribution of any type of contraceptives and have not yet intervened to end such things,” the Pope wrote.

With a profound love for Your Holiness and our Catholic faith, and duty bound by our consciences, we, the undersigned Knights and Dames of the Order of Malta respectfully seek clarification by competent authorities of serious questions and misgivings which have arisen recently in the life and governance of the the Sovereign Military Hospitaller Order of Saint John of Jerusalem of Rhodes and of Malta.

The recent unfolding of serious events that have taken place over the past months regarding the Order of Malta have left many in perplexity. This has been exacerbated by the lack of reasonable explanation presented both to the faithful members of the Order and the public at large regarding actions taken by Your Holiness and Vatican officials.

As a result, members have been left questioning their continued collaboration with the Order. Others who have been recruited to join the Order have manifested their reluctance pending valid clarification and explanation of issues that have taken place regarding due process and valid questions addressing the Order of Malta’s charitable activities and the proper oversight by those in positions of authority over programs sustained by financial support from the Order.

For this reason the undersigned Knights and Dames of the Order of Malta  request explanations and documented responses to the following concerns, which appear to compromise the Order’s mission, independent sovereignty, self-governance, and spiritual welfare.

1. Based on media accounts, Albrecht von Boeselager, the Grand Chancellor, was asked to resign by Fra Matthew Festing, the Prince and Grand Master of the order, mainly, though not solely, due to allegations that the charitable entity of the Order, Malteser International (MI), while under von Boeselager’s supervision, funded charitable relief programs that included contraceptive practices contrary to the teaching of the Catholic Church. The allegations concerned the distribution of condoms in the countries of Myanmar, Kenya and South Sudan. We understand that the allegations are derived from a forty-six page First Report produced by a formal international Commission of Inquiry established by Fra' Matthew Festing to investigate the accusations that occurred under von Boeselager’s authority. We understand that the First Report found that the MI’s policy in respect of ‘RH’ [Reproductive Health] and HIV and AIDS prevention was inconsistent with teachings of the Catholic Church in holding the following positions:

–   That it is acceptable to provide contraceptives for birth spacing;

–   That it is acceptable to distribute condoms to prevent transmission of STIs;

–   That in certain situations MI had to depart from the Church’s teaching when it perceived its “medical and moral responsibility” to be at odds with those teachings.

Additionally, the First Report indicated that, “those activities of MI […]which are deemed to be inconsistent with the Church’s teaching have not been adequately reported, through the Grand Hospitaller [Albrecht von Boeselager]” to Prince and Grand Master Fra' Matthew Festing and the Sovereign Council.

The Commision for Inquiry’s report was issued in January of 2016 and influenced Fra' Matthew Festing’s request that Albrecht von Boeselager resign in December of 2016.

2. In 2014, following the Extraordinary Synod on the Family, Your Holiness appointed Cardinal Raymond Burke to be the Patron of the Order of Malta. The official role of the Patron is to promote relations between the Holy See and the Order, and to keep Your Holiness informed about spiritual and religious aspects of the Order. In February 2017, however, as part of a series of decisions made apparently without informing Cardinal Burke, Your Holiness appointed Archbishop Angelo Becciu as Your Holiness’s Special Delegate and “exclusive spokesman” to the Sovereign Military Order. In a letter of April 15, 2017, Archbishop Becciu, writing in his capacity of Special Delegate, formally commanded Fra’ Festing “not to be present at the Complete Council of State of the Order and to forgo your trip to Rome on this occasion.” He wrote, “I ask you this as an act of obedience, in which you will, without doubt, recognize this sacrifice of yours as a self-giving gesture for the good of the Order of Malta.” This act raises questions about the proper jurisdiction of the Special Delegate with respect to all members of the sovereign Order, for it effectively places Fra’ Festing in a state of exile from Rome, it despoils Fra’ Festing of his rights as a member of the Order, and it harms the Order by interfering with a free election of the Grand Master.

In light of the above, we respectfully request that responses to these concerns be provided by competent authorities so that we can all be united in serving Our Lord through the Sovereign Military Hospitaller Order of Saint John of Jerusalem of Rhodes and of Malta.