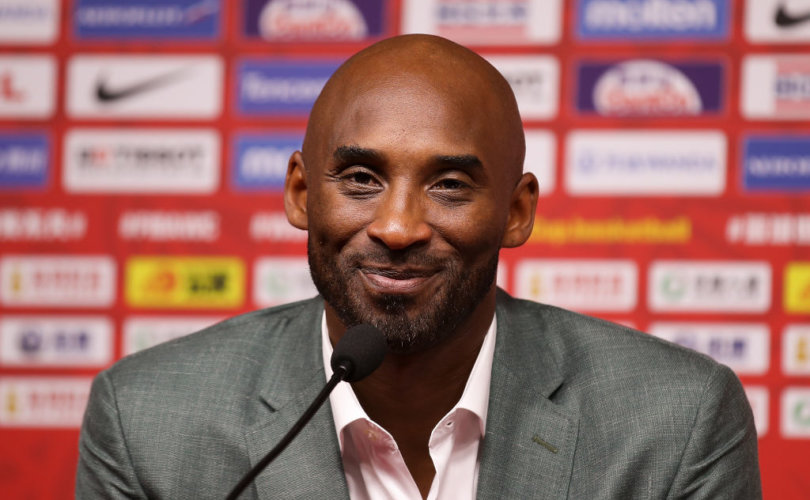 Kobe Bryant talks to the media after the game of Team Spain against Team Australia during the semi-finals of 2019 FIBA World Cup at Beijing Wukesong Sport Arena on September 13, 2019 in Beijing, China.Lintao Zhang/Getty Images

Jan. 28, 2020 update: It has been confirmed that both Kobe Bryant and his daughter Gianna went to Mass the Sunday they died in a helicopter accident. A spokesman for the parish told media that they attended the 7 AM service at Our Lady Queen of Angels in Newport Beach, CA. Both father and daughter received Holy Communion.

CALABASAS, California, January 27, 2020 (LifeSiteNews) ― Sports fans around the world are mourning the deaths of basketball star Kobe Bryant and his young daughter in a tragic helicopter crash. The star was a practicing Catholic who had attended Sunday Mass just hours before the crash.

Kobe Bryant, 41, and his thirteen-year-old daughter Gianna were killed when their helicopter crashed into a hillside near Calabasas, California yesterday. The pilot and the six other passengers on board the flight also perished in the accident.

Archbishop José H. Gomez of Los Angeles stated on Twitter that he was saddened by the news of the star’s passing.

“So very sad to hear the news of #KobeBryant’s tragic death this morning. I am praying for him and his family. May he rest in peace and may our Blessed Mother Mary bring comfort to his loved ones. #KobeBryantRIP,” Gomez wrote.

Today the archbishop told Catholic News Service that Bryant “was a very good Catholic, a faithful Catholic” whom he had often met.

“I remember one time going to the Lakers’ practice, and I had a good conversation with him,” Gomez told CNS. “We are praying for the eternal repose of his soul, his daughter who also died and for the family. It must be a very challenging time for his family. So, let’s pray for him and pray for his family.”

Bryant was considered by many to be one of the best basketball players in history. A larger-than-life figure, Bryant thrilled fans of the Los Angeles Lakers during the twenty seasons he played for them. Named the best high school basketball player in the USA, he entered the National Basketball Association immediately after graduation and helped win the Lakers five national championships. According to ESPN, he was the Lakers’ leading scorer.

Fr. David Barnes of Boston, Massachusetts spread the word that the retired star had been at Mass the morning of his death.

“As sad as Kobe’s death is,” the Boston University chaplain tweeted, “a friend texted me today to tell me that a friend of hers attends the same Catholic church as Kobe and saw him this morning at Mass.”

“There can be nothing more consoling to those who mourn than to know that a loved one worshipped God just before his death because worshiping God is what heaven is.”

Yesterday Catholic actress and singer Christina Ballestero posted a story on Instagram in which she credited the basketball star for gentlemanly behavior at a weekday Mass in Holy Family Cathedral in Orange, California.

“Right as mass begins I see a huge shadow in my right peripheral vision and hear a decently loud creak from probably a big man. I double took to see… it was  Kobe Bryant in the same pew as me on the other end,” Ballestero wrote.

“I just went about my normal praying and singing as usual ‘cause he like all of us came to pray. Thank God I had the veil so I could stay focused on Jesus not this insanely talented basketball player my whole family has looked up to and watched our whole lives,” she added.

“As we went up to communion, he waited for me to go. If you grew up in the Catholic Church, you understand this is a respectful thing men do in church as a sign of respect to women.”

The Catholic News Agency (CNA) reported that the sports star was raised in a Catholic family and credited his Catholic faith for getting him through a difficult time in his life. In 2003, Bryant was arrested after being accused of raping a woman who worked in the Colorado hotel he was staying in. Bryant admitted to having sexual relations with his accuser but denied having committed a crime. Although the criminal charges were dropped, Bryant offered an apology for his “behavior” and paid a settlement to the woman.

In 2015, he told GQ magazine that a priest helped him through the shame and the terror of a possible prison sentence:

Was I afraid of going to jail? Yes. It was twenty-five to life, man. I was terrified. The one thing that really helped me during that process—I’m Catholic, I grew up Catholic, my kids are Catholic—was talking to a priest. It was actually kind of funny: He looks at me and says, ’Did you do it?’ And I say, ’Of course not.’ Then he asks, ’Do you have a good lawyer?’ And I’m like, ’Uh, yeah, he’s phenomenal.’ So then he just said, ’Let it go. Move on. God’s not going to give you anything you can’t handle, and it’s in his hands now. This is something you can’t control. So let it go.’ And that was the turning point.”

Bryant’s fan Cristina Ballestro paid the star credit in her Instagram anecdote for turning his life around.

“His most inspiring trait was his decision to turn to his faith in God and receive God’s mercy and to be a better man after a regretful decision,” she wrote.

“Him and his wife do so much great work with their foundation.

Bryant and his wife Vanessa Urbieta Cornejo Laine married in April 2001 at St. Edward the Confessor Catholic Church in Dana Point, California shortly after Vanessa turned 18. Vanessa stood by her husband after he was accused of sexual assault and, although she filed for divorce in 2011 citing “irreconcilable differences,” the couple worked through their problems and saved their marriage. The couple had four children, all daughters.