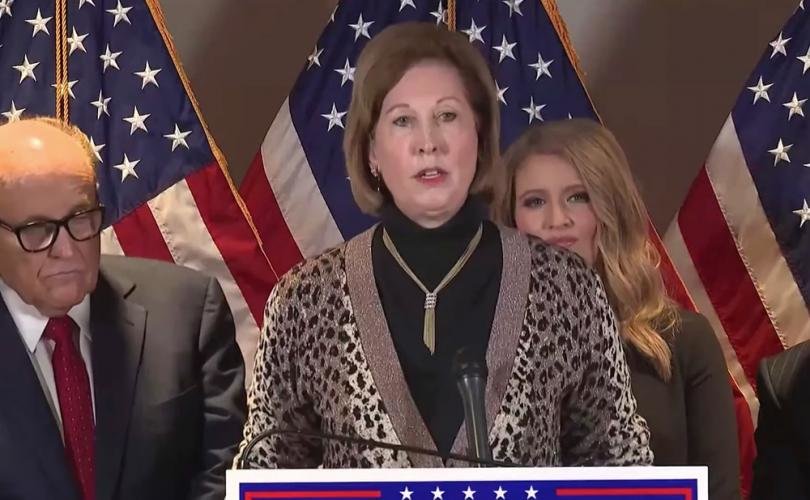 November 26, 2020 (LifeSiteNews) – Sidney Powell has finally released her promised “Kraken” in Georgia on Wednesday in the form of a 104-page legal complaint. The plaintiffs ask the court to “set aside the 2020 General Election results which fraudulently concluded that Mr. Biden defeated President Trump by 12,670 votes” because of both evident fraud and multiple violations of the Constitution and Georgia’s laws in the running of the election.”

“The Kraken is released,” states Powell’s website Defending the Republic.

The complaint asks the Northern District of Georgia, Atlanta Division court to “de-certify the election results” that currently have Biden as winner and to order Governor Kemp to “transmit certified election results that state that President Donald Trump is the winner of the election.”

Powell has also filed today a lawsuit with similar allegations of fraud and mathematical improbabilities in Michigan.

The Georgia complaint begins with a general discussion of the means allegedly employed to “illegally and fraudulently” manipulate “the vote count to make certain the election of Joe Biden as President of the United States.”

“The fraud was executed by many means, but the most fundamentally troubling, insidious, and egregious is the systemic adaptation of old-fashioned ‘ballot-stuffing,’” the complaint says. “It has now been amplified and rendered virtually invisible by computer software created and run by domestic and foreign actors for that very purpose. Mathematical and statistical anomalies rising to the level of impossibilities, as shown by affidavits of multiple witnesses, documentation, and expert testimony evince this scheme across the state of Georgia.”

The opening summary details the origins of the voting machine company and its connection to Sequoia and Smartmatic, while noting that “the design and features of the Dominion software do not permit a simple audit to reveal its misallocation, redistribution, or deletion of votes,” because “the system's central accumulator does not include a protected real-time audit log that maintains the date and time stamps of all significant election events…Essentially this allows an unauthorized user the opportunity to arbitrarily add, modify, or remove log entries, causing the machine to log election events that do not reflect actual voting tabulations—or more specifically, do not reflect the actual votes of or the will of the people.”

The complaint also alleges that Governor Kemp and Secretary of State Brad Raffensperger “rushed through the purchase of Dominion voting machines and software” despite knowing the concerns that led the Texas Board of Elections to reject the product in 2018, “namely, that it was vulnerable to undetected and non-auditable manipulation.”

These vulnerabilities are attested to by US military and intelligence experts who say that “the Dominion software was accessed by agents acting on behalf of China and Iran in order to monitor and manipulate elections, including the most recent US general election in 2020” and that “US intelligence services had developed tools to infiltrate foreign voting systems including Dominion.”

Further, the complaint provides evidence that Dr. Eric Coomer, one of the founders of Dominion, told a virtual Antifa meeting that “Trump is not going to win. I make [expletive] sure of that.”

The complaint also provides statistical analyses showing “that the mail ballot system has fundamentally failed to provide a fair voting mechanism” with the result that “tens of thousands of votes did not count while the pattern of fraud and mathematical anomalies that are impossible absent malign human agency makes clear that tens of thousands were improperly counted.”

In addition to Powell’s complaint, The Thomas More Society’s Amistad Project has filed litigation in Georgia that claims “well over 100,000 illegal votes [in Georgia] were improperly counted, while tens of thousands of legal votes were not counted.” Further, Lin Wood’s lawsuit challenging the validity of Georgia’s election procedure has been granted an emergency motion for expedited review.

We The People delivered a historic landslide win for @realDonaldTrump in GA & nationally.

We The People will not allow it be stolen. pic.twitter.com/YVFmaZzuYj

I know Sidney Powell. She is telling the truth