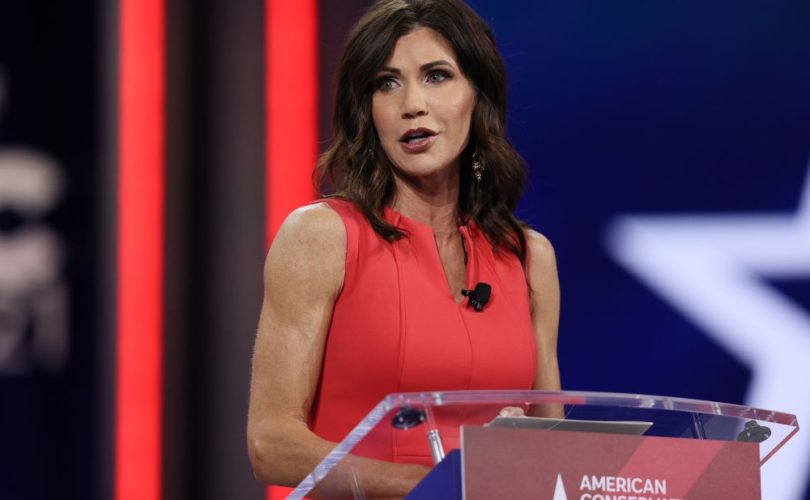 Earlier this month, Alpha News reported that Sanford Health (the “largest rural health system in the United States”) will be partnering with the LGBT youth activist group the Transformation Project next month for the third annual Midwest Gender Identity Summit, an event “to review the needs of transgender patients in healthcare” through topics such as “Learning to Address Implicit Bias Towards LGBTQ+ & 2S [two-spirit] Patients,” “”How My Journey as a Transgender Provider Has Impacted Patient Care,” and “Creating a Gender Inclusive Practice.”

Join us for the 2nd Annual Phoenix Festival to burn your old name or pronouns, release the past and step forward into the light.
RSVP at https://t.co/XplhxRFUw8 to participate.#transformation #trans #nonbinary #genderfluid #phoenix #siouxfalls #fallspark #transformingsodak pic.twitter.com/uCTW90iHYA

The Daily Signal reported that South Dakota had entered into a contract with the Transformation Project to develop and evaluate a Community Health Worker Program, but within days of being asked about it by the publication, the governor’s office terminated the contract, informing the organization it was “failed to perform [its] obligations” and was “in material breach” of its terms.

Noem then announced the retirement of Adam, whom she had hired in March of 2022, wishing her the best without mentioning the contract, which communications chief Ian Fury said “was signed without Gov. Noem’s prior knowledge or approval.” He added that the governor was “reviewing all Department of Health contracts.”

“I’m glad to see that the governor is cleaning house,” said Linda Schauer, South Dakota state director for Concerned Women for America. “We need people in our state government who will reflect South Dakota values and protect our children. Our leaders must recognize the destructive indoctrination of our youth in transgender identity and the costly practices of sex reassignment that cause irreversible damage.”

“I’m grateful that Governor Noem took swift action to sever the contract once she learned about it,” said Jay Richards, director of the Heritage Foundation’s Richard and Helen DeVos Center for Life, Religion, and Family. “But someone was responsible for the debacle. Surely the buck stops with the health secretary, who has now announced her retirement. Though the press release announcing the state health secretary’s retirement doesn’t mention this incident, the timing is suggestive. It’s hard to imagine that the event happened without the knowledge of Secretary Joan Adam.”

Noem, who is generally conservative and has been suggested as a potential presidential or vice presidential contender, has had a complicated relationship with transgender issues.

In early March 2021, she declared she was “excited to sign… very soon” HB1217, which affirmed that a “team or sport designated as being female is available only to participants who are female, based on their biological sex.” But days later, following a barrage of media and corporate pressure, Noem reversed herself at the last minute, announcing she was sending the bill back to the legislature over sudden reservations about its “vague and overly broad language” and suggesting various “style and form” changes.

— Article continues below Petition —
Stand with Josh Alexander against school that allows boys to use girls' bathrooms
Show Petition Text
5617 have signed the petition.
Let's get to 6000!
Thank you for signing this petition!
Add your signature:
Show Petition Text

Those changes, which would have made the bill harder to enforce at the high school level and would have exempted the collegiate level entirely, didn’t sit well with most conservatives, whom Noem tried and failed to mollify by announcing a “Defend Title IX Coalition” — effectively a petition which carried no legal force, but did help Noem collect contact information for future mailing lists.

The South Dakota House “resoundingly” rejected Noem’s “style and form” changes, and Noem sent a letter to House leaders declaring the bill effectively vetoed, while laying the blame on the legislature’s refusal to make her recommended changes rather than her rejection of the measure.

Almost a year later, she signed into law SB46, which declared that “[o]nly female students, based on their biological sex, may participate in any team, sport, or athletic event designated as being for females, women, or girls.” It let students bring civil suits against schools or athletic associations for “direct or indirect harm” due to violations of the bill, schools sue any government entity that retaliates against them for refusing to let gender-confused athletes compete based on their “gender identity,” and bars retaliation against students for reporting violations. But it did not allow students to sue schools for monetary damages as a result of “psychological, emotional, and physical harm” caused by having to compete with someone of the opposite sex.

This past June, Noem threatened to sue the Biden administration if it attempted to punish states that limit female student athletics to actual females by denying them federal funds.