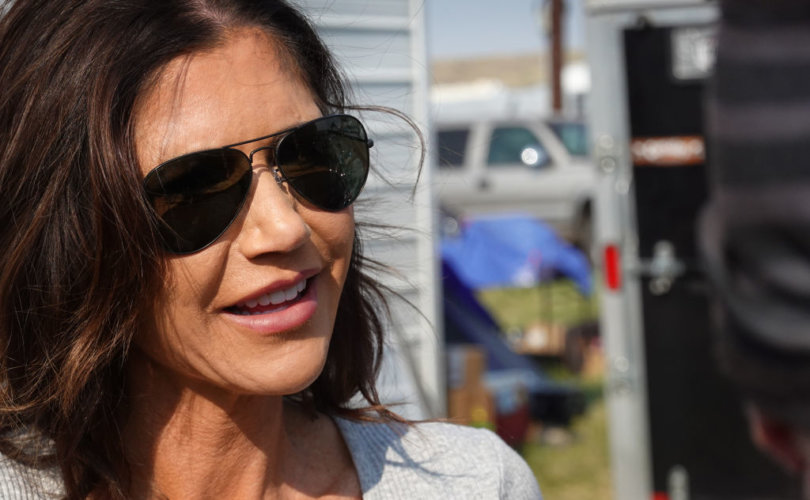 PIERRE, South Dakota (LifeSiteNews) — South Dakota has joined the ranks of Republican-led states introducing measures to ban or strictly limit abortion in anticipation of the U.S. Supreme Court’s decision in Dobbs v. Jackson Women’s Health Organization, which could see the federal “right to abortion” overturned as early as this summer.

The legislative measures proposed by South Dakota’s Republican Gov. Kristi Noem could result in a formal ban on nearly all abortions within the Mount Rushmore State.

On Friday, the same day that tens of thousands of pro-lifers gathered for the annual March for Life in Washington, D.C., Noem introduced two pro-life bill drafts in her state: one that would ban abortions after a fetal heartbeat can be detected (usually around six weeks gestation), and another which would prohibit the distribution of abortion drugs through the mail.

Today, as tens of thousands of pro-life Americans participate in the annual March for Life in Washington, DC, I am announcing two pro-life bills.

One will ban abortions once a child’s heartbeat can be detected.

The second will ban telemedicine abortions in South Dakota.

“Every human life is unique and beautiful from the moment it is conceived. Every life is worthy of our protection, worthy of the right to live,” said Noem in a press release January 21. “We hope that this year’s March for Life will be the last and that the Supreme Court will finally protect every unborn life. But until that comes to pass, these bills will ensure that both unborn children and their mothers are protected in South Dakota.”

Early signs point to the future success of the draft bills.

According to CBS, Noem had “previewed the legislation for weeks, and it has received an enthusiastic reception from fellow Republicans who dominate the Legislature.”

Like the controversial Heartbeat Act recently signed into law in Texas, South Dakota’s measure would skirt some legal challenges by leaving enforcement up to private citizens. According to the text, South Dakotans would be empowered to sue abortion providers and those who assist women in obtaining abortions, rather than the state pursuing top-down enforcement via criminal charges and prosecutions.

There are no exceptions in the legislative proposals for abortion in cases of rape or incest, but, as CBS noted, the text makes clear that “a man who commits the rape or incest cannot sue.”

Violators of the proposed law would be faced with a minimum $10,000 fine in addition to legal fees and other compensation.

While Noem’s proposals have made headlines and would drastically reduce abortions in the state, the draft bills aren’t the only provisions in South Dakota law which seek to restrict abortion.

Planned Parenthood has noted that the state has already enacted a raft of pro-life laws, including a measure requiring women and girls seeking abortions to undergo “state-directed counseling that includes information discouraging her from having an abortion.”

Other laws enacted in South Dakota include one requiring a 72-hour waiting period before a woman can obtain an abortion, a prohibition against health insurance companies covering abortions, a provision requiring parents to be notified before a minor can kill her unborn child, and a ban on public funding for abortion.

In addition, just last year Noem “signed eight pro-life bills into law, including a ban on abortions based on a diagnosis of Down syndrome and a bill to protect children born alive, regardless of the circumstances of that child’s birth,” a press release put out by the governor’s office noted.

South Dakota’s laws, many of which have been on the books for years, have contributed to a sharp decline in abortions in the state, with Noem asserting that over the past decade abortions have gone down by 80%.

Abortions have dropped by 80% in South Dakota over the last decade, but there is more that we can do to protect unborn lives.

We must end abortions once a heartbeat can be detected. Any abortion after that point stops that child’s heartbeat — stops that gift from God. pic.twitter.com/EUbHMTGsRA

Meanwhile, it’s likely that South Dakota lawmakers will go even further to protect the unborn in the future, pending a decision from the U.S. Supreme Court in the much anticipated Dobbs v. Jackson case, which could reverse the Court’s earlier precedent in Roe v. Wade (1973) which established a “constitutional right to abortion.”

If the Court strikes down Roe, sending the matter of abortion back to the states, South Dakota’s government will immediately outlaw almost all abortions thanks to a trigger law enacted in 2005.

“As soon as the High Court overturns Roe v. Wade, our state laws already in place should protect every unborn South Dakota child,” said Noem in another press release Friday. “But until then, we can take steps to protect South Dakota children today. And we will do it from the very first heartbeat of every child.”

Noem’s moves to enact pro-life legislation in her state continues to situate her within national politics, a place she has held since her state gained notoriety in 2020 for shunning restrictive lockdown policies and mandates in response to COVID-19.

While Noem generated significant conservative support for her focus on honoring the freedom of her constituents, her popularity suffered a setback when she appeared to cave to woke corporate interests by backing away from legislation which would have prevented men who identify as women from competing against women in professional sports in the state.

The South Dakota governor also came under fire by conservatives when she appeared to suggest that if employers want to fire unvaccinated workers, those employees should simply find another job.

Whether or not Noem’s moves to defend the unborn will help her regain her credibility as a staunch defender of conservative values remains to be seen, but her interest in staying in the national political spotlight could see her among the top contenders for the U.S. presidency in 2024.