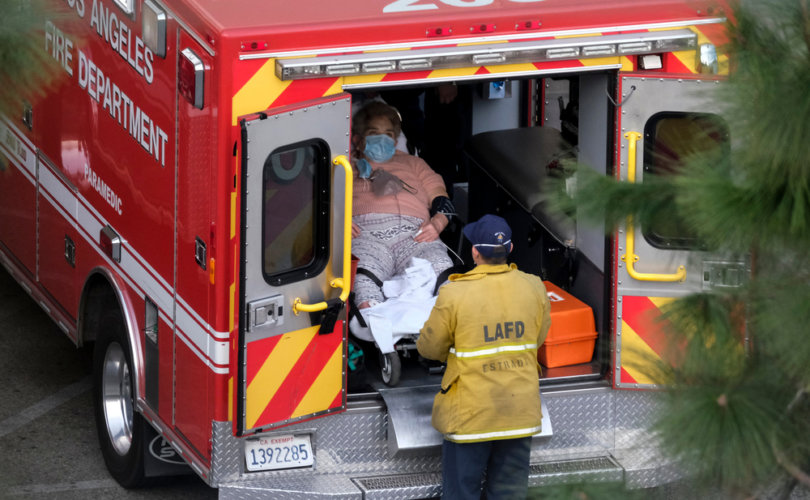 LOS ANGELES (LifeSiteNews) — Firefighters with the Los Angeles Fire Department (LAFD) blasted liberty-crushing coronavirus jab mandates and explained their own reasons for rejecting the shots in a powerful documentary published this week.

During the concise nine-minute video posted to Rumble on Monday, firefighters affiliated with the group Firefighters4Freedom — a grassroots organization opposing jab mandates for emergency services personnel — described the on-the-ground impacts of coercive injection mandates while explaining why they have personally opted not to take the shots despite mounting pressure to do so.

The documentary opens with firefighters sharing their first-hand experiences treating people who have suffered adverse reactions to the increasingly-mandated coronavirus shots.

“When we’re on-scene, we do a history of the patient,” one firefighter said, explaining that the department has dealt with patients whose cardiac problems can be directly traced back to receiving their COVID jabs.

“So if the only thing they change in their life is they just got this new vaccine, then that would be the first thing that anyone would look at,” another contributed.

“We’ve seen too much with the COVID vaccine injuries,” another firefighter said, adding that severe adverse events haven’t been limited to patients they deal with on calls. “I’ve seen multiple firefighters on our job, we take them to the hospital in our only ambulance right after getting their COVID vaccine.”

The L.A. firefighters said that seeing and dealing with the very real medical effects of the experimental COVID-19 drugs has bolstered their own decisions not to take the jab despite being placed on unpaid leave or threatened with termination by the city.

“These experiences that I’ve had, as far as adverse effects, in the field, has only solidified my decision from what I felt from the start,” one firefighter shared.

Firefighters4Freedom leader John Knox, a 21-year-veteran of the LAFD, said his group became aware of the U.S. government’s Vaccine Adverse Event Reporting System (VAERS), which records side effects which have occurred in connection with vaccines, and decided to start a department-wide database to record injuries sustained by LAFD personnel who took the shots.

“In a period of I’d say two to three weeks we had I believe at least 50 [reports],” Knox said. “They ranged from mild to life-altering events for people. Things that, their life will never be the same again. I mean, there’s nothing else to link it to. Who are we kidding here?”

In addition to describing their experiences with vaccine injuries, the firefighters slammed jab mandates which either coerce people to get the experimental cocktails against their wishes or force out skilled responders who refuse to do so.

“To threaten someone for not complying with something that can cause an adverse reaction, it’s very dark,” one firefighter remarked.

Firefighters4Freedom has been fighting an uphill battle against COVID jab mandates since last summer.

In August 2021 the L.A. city council approved a measure to mandate inoculation against COVID-19 for all emergency services personnel. In consequence, firefighters with the LAFD were threatened with unpaid leave or terminatation should they refuse to get the experimental, abortion-tainted drugs.

While many complied, others bucked the requirements, organizing with fellow firefighters and law enforcement officers to pursue legal action to protect their livelihoods, consciences, and bodily autonomy even at the risk of losing their jobs.

During the documentary, the firefighters blasted the city for edging out skilled and experienced first responders, arguing that firing crucial personnel will cause devastating shortfalls in emergency care throughout the city. The firefighters also echoed other health professionals who have decried political moves to cast them as the “bad guys” for refusing to get the jab even as they lose their livelihoods.

“So when the citizens of Los Angeles, or across this nation, call 911, there just won’t be enough people to go and respond to all the heart attacks, stroke patients, traffic accidents, that are still occurring in the city of Los Angeles,” one firefighter commented, predicting mass firing of unvaccinated employees “will shut the city down.”

“The thing that strikes me as so strange and hypocritical about what’s happening is that we risk ourselves for the public that we want to help. And everybody appreciated it. And now somehow we’re bad guys and it doesn’t really make any sense to me,” another firefighter said.

The complaints regarding the sudden switch in public perception mirrors a similar concern expressed by nurses, doctors, and other healthcare professionals who were praised for their sacrifices in 2020 and will now lose their jobs if they refuse to get jabbed with an experimental drug whose long-term side effects are unknown and which has already contributed to hundreds of thousands of reported adverse reactions.

One firefighter pointed out that since many people who deal directly with sick people — including firefighters, nurses, and doctors — are vocally opposed to jab mandates and willing to walk away from their roles rather than take the shots, “That should tell you something.”

For the members of Firefighters4Freedom, the jab mandates don’t just threaten physical safety, they amount to a violation of basic freedoms as well as the ability to make choices in a manner that aligns with one’s religious values.

“They’re stripping our liberties and our freedom away through regulation and mandates,” said Knox, as other firefighters pointed out that once a precedent has been set which robs Americans of their rights to make personal medical decisions, there may be no going back.

In closing the documentary, the firefighters urged everyone in all walks of life who share their concerns to “stand up” and do whatever they can to promote the cause of liberty even in the face of setbacks.

“Stand together,” one firefighter said. “Shoulder to shoulder. We’re stronger in numbers.”

As of mid-December 2021, over 100 Los Angeles firefighters were suspended without pay for refusing to take the experimental drugs.

On December 22 after Firefighters4Freedom filed a lawsuit against the city, a judge ruled the city was within its rights to terminate the department’s unvaccinated firefighters.