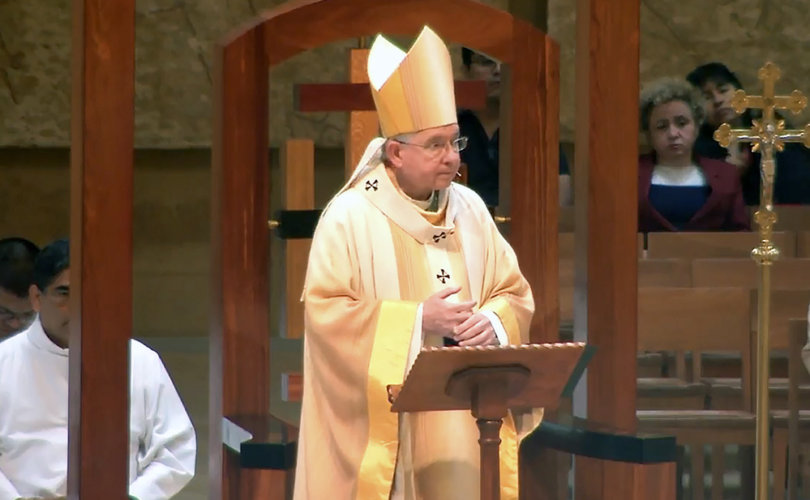 Attendees gathered at the Cathedral of Our Lady of the Angels on Sunday, April 22, to honor the legacy of the civil rights and farm labor leader who died 25 years ago.

Chavez founded the United Farm Workers of America (UFW) and is celebrated by many as a trailblazing civil rights leader.

Honoring Chavez as a Catholic icon, however, is problematic.

“The official bio on the Chavez Foundation website says, ‘Cesar made everyone, especially the farm workers, feel the jobs they were doing in the movement were very important,” noted Breitbart’s Lee Stranahan in 2013.  “But the real Cesar Chavez treated his volunteers horribly.”

“And Chavez actually had contempt for the farmworkers,” Stranahan continued. “In a meeting in 1977, he referred to them as ‘pigs.’ The comments were reportedly removed from the minutes of the meeting: “Every time we look at [the farmworkers], they want more money. Like pigs, you know. Here we’re slaving, and we’re starving and the g-d-m workers don’t give a s–t about anything because we don’t train them, you know, we don’t teach them anything.”

Ruben Navarrette, the most widely read Latino columnist in the country, exposed the dark side of the Cesar Chavez legacy in an article he wrote for CNN:

Chavez earned many titles in his life, but “champion of immigrants” was not one of them. He was primarily a labor leader who was concerned about illegal immigrants undercutting union members, either by accepting lower wages or crossing picket lines. He never pretended to be anything else, and he resisted attempts by others to widen his agenda. When he pulled workers out of the field during a strike, the last thing he wanted was to see a crew of illegal immigrant workers take away his leverage.

According to many historical accounts, Chavez ordered union members to call the Immigration and Naturalization Service and report illegal immigrants who were working in the fields so that they could be deported. Some UFW officials were also known to picket INS offices to demand a crackdown on illegal immigrants.

In the 70s, the UFW set up a “wet line” to stop undocumented Mexican immigrants from entering the United States.

UFW loyalists will never admit to this ugly history. But that doesn't change it.

LA’s Archbishop Gomez, who is also the current vice president of the United States Catholic Conference of Bishops (USCCB), is often portrayed as a moderating force in the liberal environs of southern California.  As a prominent member of Opus Dei, he’s thought to be a voice for orthodoxy.

Yet as his tenure as the chief shepherd of the Catholic Church in Los Angeles, that voice for orthodoxy is growing less and less audible.

In addition to presiding over this year’s Chavez Mass where the city’s high profile pro-abortion, pro-LGBT mayor was permitted to receive communion, Gomez also recently permitted the heavy infiltration of pro-LGBT forces into the city’s annual Religious Education Conference.

Of the 300-plus presentations at this year’s event, at least 10 centered on “LGBT ministry.”