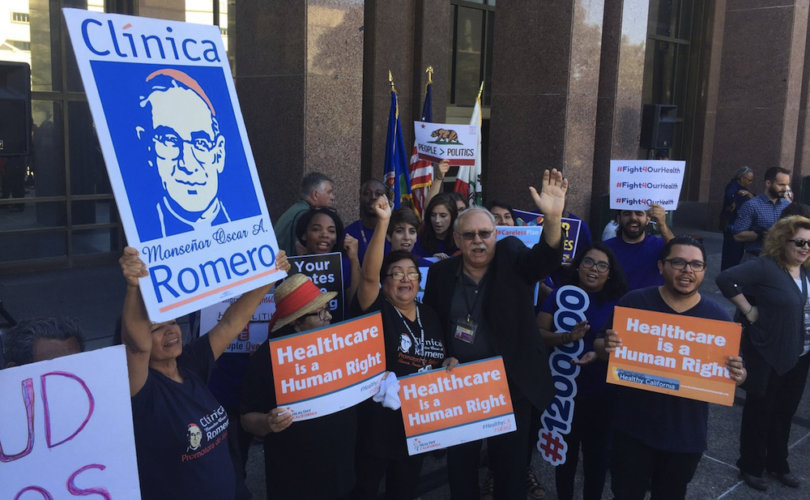 LOS ANGELES, California, August 4, 2017 (LifeSiteNews) – The Archdiocese of Los Angeles caused a stir by distributing an invitation to a Mass at its cathedral in partnership with a clinic that prescribes contraceptives.

After receiving inquiries regarding a partnership with an organization that acts in conflict with the teachings of Catholic Church, the archdiocese acted to amend its invitation. But it’s not clear whether the clinic remains involved. No disavowal of the clinic has been made.

The Mass commemorating the birth of Blessed Archbishop Oscar Romero is scheduled for August 13 with Los Angeles Archbishop Jose Gomez as the celebrant, according to information provided anonymously to the Canon212 website’s editor and shared with LifeSiteNews.

Clinica Romero, according to the source, conducts sex education and abortion referrals in addition to providing contraception, which is referenced on its website.

“The Archdiocese of Los Angeles along with Clinica Romero would like to invite you and all parishioners to our upcoming Mass in Celebration of Blessed Monsenor Oscar Romero’s 100th Anniversary of his birth on August 13 at 12:30 p.m. The Mass will take place at the Cathedral of Our Lady of the Angels celebrated by Archbishop Jose H. Gomez.”

Further information was provided and a flyer for the event attached.

The original flyer for the Mass shows logos for the archdiocese, the cathedral, Clinica Romero, and immigrants’ rights group SALEF (Salvadoran American Leadership and Educational Fund).

On the new flyer, all four logos are removed, and instead it states, “The Salvadoran Community of the Archdiocese of Los Angeles invite all to celebrate his life and legacy.”

The archdiocese’s accompanying email with the new flyer said it was updated to reflect the participation of the Salvadoran Community of the archdiocese at the Mass and it requested that the updated flyer should be used to promote the Mass.

The Archdiocese of Los Angeles did not respond to a LifeSiteNews inquiry to ask about archdiocesan policy with regard to partnering with organizations that promote things that are against Church teaching or a follow-up that requested confirmation of whether Clinica Romero was still involved with the Mass.

The original flyer showing partnership with the Los Angeles archdiocese and Clinica Romero made it into at least one archdiocesan parish’s bulletin announcement this past weekend.

The clinic is named for the Salvadoran archbishop murdered in 1980 while at the altar saying Mass.

Archbishop Romero (1917-1980) was the archbishop of San Salvador, El Salvador, and a controversial figure in South American politics.

He was known for his work with the poor, and he is considered a hero among proponents of liberation theology, though his biographer has denied the archbishop’s connections to the Marxist theology.

Pope Francis unblocked the beatification process for Archbishop Romero not long after he was elected in 2013, criticizing conservatives within the Church who “defamed” the archbishop.

The pope declared Archbishop Romero a martyr in 2015 and beatified him later that year.

Clinica Romero is a member of Community Clinic Association of Los Angeles County.

The Association had scheduled an event last month at the archdiocese’s Center on the Cathedral Plaza, a site available for rent from the archdiocese.

The June Policy Café event was reportedly moved to another venue after pro-life media reported on the Planned Parenthood keynotes.

However, the Community Clinic Association of Los Angeles County event in the same Policy Café series is set for August 23 at the archdiocese’s Center on the Cathedral Plaza, and it features California Representative Judy Chu, an abortion supporter.