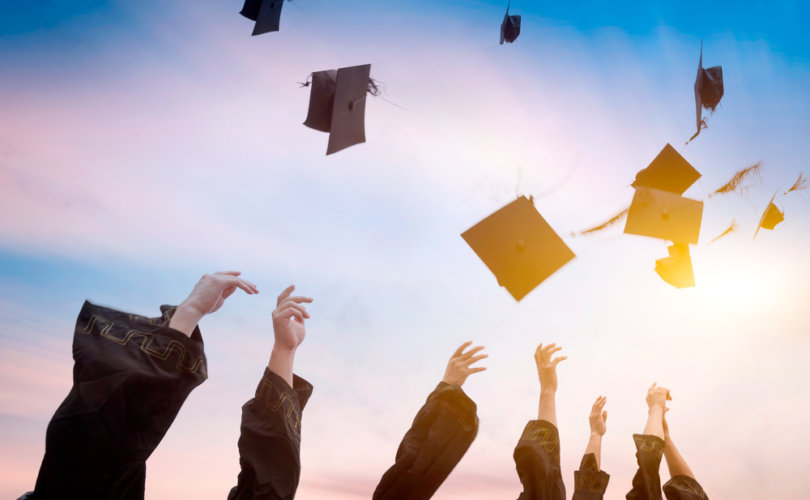 LOS ANGELES (LifeSiteNews) – A Los Angeles charter school barred its high school seniors from attending their graduation if they did not get the abortion-tainted COVID-19 vaccine.

GHC’s jab policy, adopted in October, maintains that any student aged twelve and above who is eligible for a COVID jab must get the jab or apply for an independent study program. The policy went into effect at the start of the spring semester in January. Visitors to GHC’s campus must also provide proof of vaccination.

Speaking to the Los Angeles Daily News, Andrew Luna, a recent graduate of GHC, said “I feel like I’ve earned these events, like Grad Night, prom … I did all four years at this school. For them to take [these events] from me at my final moment, of course it’s upsetting.”

A statement released by GCH states “Our community asked for and has overwhelmingly supported our student vaccination policy, as demonstrated by our 99% vaccination rate amongst those who are eligible to be vaccinated.”

“Our Board stands by the science that indicates that vaccination is the most effective and best tool available to minimize the spread of COVID-19 and ensure the safest learning environment possible.”

Rallies were held Tuesday and Thursday to protest GCH’s decision to bar the seniors from graduation. Speaking to Los Angeles’ KTLA television station, Parisa Fishback, co-founder of Moms on the Ground, an organization that supports vaccine choice, said “Every American should be upset, parents or not. This is egregious discrimination for no good reason. The school’s excuse is that their community wanted this type of segregation.”

A statement from GCH discussing the protests said, “While we respect the right of people to demonstrate peacefully, today our focus is on all of our graduates and their families.”

“We are excited to celebrate their accomplishments, and we are pleased to be able to do so as safely as possible while following health protocols that have been in place throughout our school year,” the statement continued.

Critics of GCH’s policy point to the decision of Los Angeles Unified School District (LAUSD) to delay their jab policy twice, and saythat by maintaining strict adherence to its policy, GCH is an outlier in the area.

GCH holds that LAUSD made the decision to delay their jab policy on account of logistical challenges, which GCH does not face.

“That LAUSD has made its own decision to delay the implementation of its COVID-19 vaccine policy based on its logistical realities does not mean that delay is the prudent course for LHC,” the school told the Los Angeles Daily News.

Critics also note that eight of the seventy students who were not allowed to attend their celebrations were special needs students permitted on campus during the school year. Barring these students would constitute a violation of the Americans with Disabilities Act, they hold. In response to this criticsm, GCH’s spokesperson Jordan Duke stated that waivers obtained for in-person learning do not apply for school events, and that the students either had to get jabbed or apply for a medical exemption to attend.

GCH is not the only charter school in the Los Angeles area to spark protests over jab policy. In January, New West Charter School (NWC) forced six unjabbed students to sit in a sectioned off area of the school’s parking lot and asked them to leave school property or face suspension. NWC is currently facing a lawsuit from Let Them Breathe, a pro-vaccine choice group, for segregating the students.

Last year, a judge overturned a similar jab mandate imposed by San Diego Unified School District (SDUSD), saying that the mandate “attempts to impose an additional requirement in a field that the Legislature fully occupies.”

Some medical experts have warned parents not to vaccinate their children against COVID-19, citing the adverse effects that the jabs have on children and the minimal risk COVID poses for them.

“Honestly, I would organize with other parents to take them out of the school and create homeschooling environments,” Dr. Harvey Risch, a Yale epidemiologist, told Mark Levin on FOX News last October.

While acknowledging that the jab is not always high risk in children, Risch stated, “It’s enough of a risk that, on the average, the benefit is higher for homeschooling than it is for vaccination and being in school.”