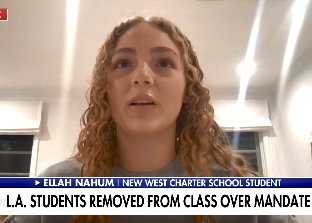 LOS ANGELES (LifeSiteNews) – A Los Angeles charter school is facing a lawsuit from students and parents after it would not allow students on campus who would not abide by the school vaccine mandate.

The lawsuit was filed by students and parents against New West Charter School (NWC) after six female students were forced on January 18 to sit in a sectioned-off area of the school parking lot and were threatened with suspension if they did not leave campus. Videos of the incident were uploaded to Twitter.

The school announced the mandate last October. While it allows for medical exemptions, it does not allow for religious exemptions. The mandate applies to students ages 12 and up. Students were given until December 28 to get up to date on the jab. Students who would not comply could face disenrollment as of January 27. There is also an independent study option for those who wish to stay home. The mandate went into effect the day the students were denied entry into the school.

Unvax students at New West Charter LA segregated behind barriers & not allowed to attend class. They asked for chairs, were denied & are sitting on the pavement, not allowed to even use restroom. LAPD is on site but not intervening. Litigation from Let Them Choose already pending pic.twitter.com/hgCI97HYv1

In a statement released to the Daily Mail, NWC said that the students were told to leave campus but staged a sit-in at the school’s PCR testing area. The school called local police to help ease the situation.

New West Charter is now threatening to suspend peaceful unvax students who are in parking lot for “disrupting school activities” even though LAUSD suspended mandate and we beat SDUSD mandate. Let Them Choose has litigation pending against New West mandate. pic.twitter.com/LaayZfz3It

Ellah Nahum, a student who spoke to FOX News, said she felt abandoned by the administration. “I felt like I was kicked to the curb by my entire school,” she said. “They were supposed to be the ones backing me up, encouraging me to attend school, to learn.”

Nahum believes that the school is denying her right to in-person education, saying “I’m just trying to exercise my constitutional rights.”

Sharon McKeeman, founder of Let Them Breathe (LTB), a San Diego-based organization dedicated to promoting vaccine choice in schools that is helping with the lawsuit against NWC, told Fox News, “We’ve been helping parents advocate, and now we’ve filed this lawsuit on behalf of students like Ellah because no young person should be segregated or punished … just for trying to access their in-person education in the United States of America.

Let Them Choose (LTC), an organization affiliated with LTB, filed lawsuits against the San Diego United (SDUSC) and Los Angeles school districts for similar jab mandates. In the case of SDUSC, a judge sided with LTC, claiming that the district had attempted to “impose an additional requirement in a field that the Legislature fully occupies.”

NWC maintains that most of the school’s parents urged the school to “enforce a measure that would protect the health and safety of its roughly 1,000 students and staff,” and that parents were given the opportunity to voice concerns over the policy before going into effect. However, NWC did not mention if anyone voiced any concerns or if any concern was alleviated.

McKeeman, speaking to LifeSiteNews, said, “Often when parents try to voice concerns at school board meetings the number of speakers is limited or technical difficulties keep them from being heard correctly. Also, I know parents’ emails on this subject were met not with dialogue but with announcements that their students were going to be disenrolled (sic).” She also said that many parents are afraid to speak up for fear of having a bad relationship with the school.

The parents contacted LTB after hearing about the successful lawsuit against SDUSC. “The parents had been trying to figure out how to stand up for their students’ rights and how they could fund legal action. However, it was not until [LTC] won our lawsuit against [SDUSC] that parents found out about our legal efforts and connected with us,” McKeeman said.

Speaking about the lack of a religious exemption, McKeeman pointed out, “NWC is violating state law by not allowing personal belief exemptions. We established this in our case against SDUSD.”

NWC maintains that about 96% of students and staff are jabbed, and that they are on the “right side of this issue.”

The lawsuit comes as California Democrat state senator Richard Pan introduced legislation Monday that would require inoculation against COVID-19 for students ages five and above, a change that the Los Angeles Times  maintains would put the lawsuit against NWC in jeopardy.

LifeSiteNews reached out to NWC and has yet to receive a response.