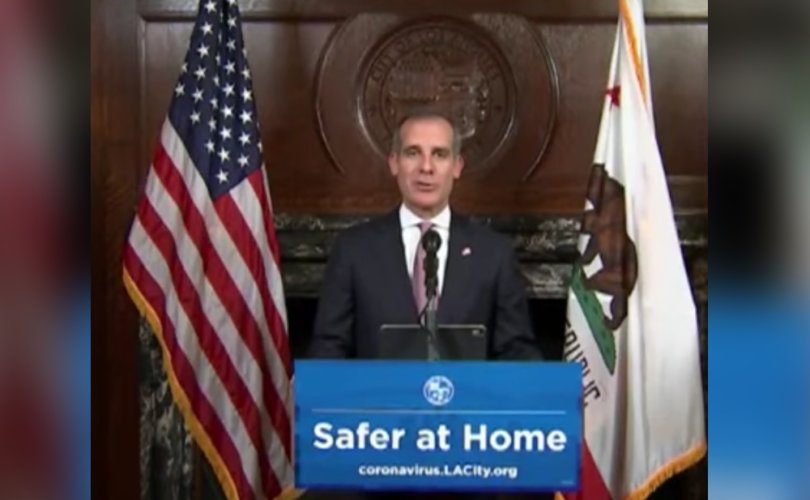 LOS ANGELES, August 10, 2020 (LifeSiteNews) – Los Angeles Democrat Mayor Eric Garcetti has made good on his previous threat to shut off power to buildings where social distancing is not practiced, including churches.

In March, Garcetti threatened to cut off power to any “irresponsible and selfish” private entity that defied shutdown orders, which in California currently include a ban on indoor religious services in 29 counties representing 80 percent of the state’s population, in the name of containing the spread of COVID-19. Numerous churches have defied the order, including Grace Community Church of Sun Valley, Cornerstone Church of Fresno, Destiny Christian Church of Rocklin, and Harvest Rock Church of Pasadena.

Last Wednesday, Garcetti announced that, effective the following Friday evening, “if LAPD responds and verifies that a large gathering is occurring at a property, and we see these properties offending time and time again, they will provide notice and initiate the process to request that DWP shut off service within the next 48 hours.”

“By turning off that power, shutting down that water, we feel we can close these places down, which usually are not one-time offenders, but multiple offenders,” The mayor said. His announcement focused on secular gatherings such as large house parties, but the threat applies to churches, as well.

“California Christians now have a choice – serve the Lord or have their basic utilities cut off,” Liberty Counsel founder and chairman Mat Staver responded. “Liberty Counsel is working to bring these cases to the Supreme Court of the United States so that we can set the precedent once and for all – that no governor will be able to ignore the fact that religious freedom is free in the United States of America.”

Across the world, many secular authorities have heavily restricted the right to religious assembly in the name of containing COVID-19, from in-person gathering to singing to the distribution of Holy Communion, even in some cases banning people from gathering in parking lots and worshiping from within their individual cars.

But of arguably greater concern for the faithful are Catholic leaders voluntarily imposing such restrictions on their congregations. Bishops in parts of the United States, France, Malta, Jerusalem, Singapore, the Philippines, England, and Wales have all forbidden receiving Communion on the tongue. In the U.S. territory of Guam, St. Jude Thaddeus Catholic Parish has posted warnings not to kneel during prayer.