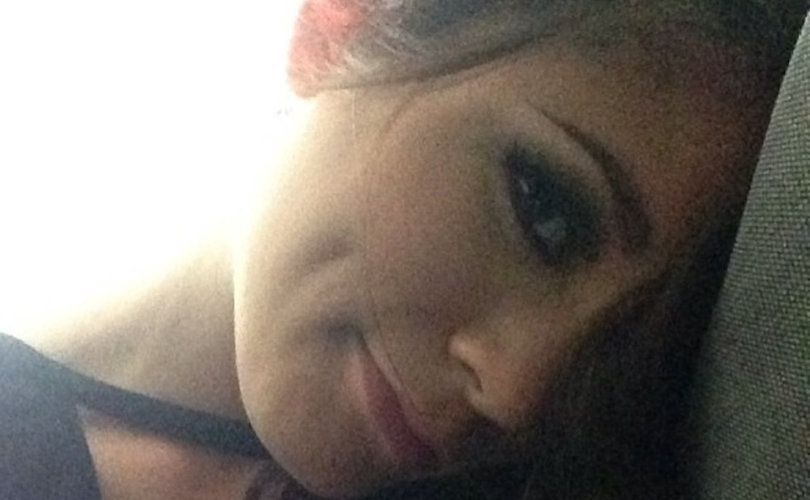 LOS ANGELES, California, September 15, 2016 (LifeSiteNews) — The lie behind the abortion movement's slogan, “a woman’s right to choose,” is known to the women who have experienced heavy pressure – and often outright coercion – to abort their babies. Indeed, as countless testimonies from post-abortive women attest, the pressure exerted on women to kill their children – by husbands or boyfriends, and even their own families – is often so extreme as to make the word “choice” a mockery.

This experience of pressure when she was at her most vulnerable played itself out recently in the life of Maegan Chen, a Los Angeles model who was seeing Nathan Hamill, son of Mark Hamill, best known for his portrayal of Luke Skywalker in the Star Wars movies.

Maegan told LifeSite that her relationship with Nathan began in January and by March she found out she was pregnant. “I told him that I was pregnant as soon as I knew. He immediately told me he wanted me to get an abortion,” Maegan relates. Maegan said Nathan insisted that she abort even though she resisted, in part due to the trauma she had experienced from a previous abortion — something that had left her “suicidal and depressed for a long time afterwards.”

Her baby, due in October, is already an abortion survivor.

Maegan eventually said she would get the abortion, but grace intervened. Due to a communication mix-up, a scheduled surgical abortion didn’t go forward. She opted for a medical abortion instead. She says she even went ahead with it, taking pills that resulted in bleeding, and she thought her child had been aborted.

Nevertheless, a later ultrasound showed the child to be alive, despite the abortion attempt. Meagan once again found herself under pressure to attempt another abortion, but she had resolved to let the child live.

Maegan says Nathan would not accept adoption as an option when she suggested it, calling the proposal “selfish.” She says finally “he stopped talking with me so I couldn't again ask why there was no other alternative.”

Nathan’s parents, Star Wars actor Mark and wife Marilou, also pressured Maegan to try another abortion, Maegan says. Nathan was not ready for a child, they said, and despite their claim that “they wanted a grandchild more than anything,” she says they told her “abortion was the best option.”

“Mark told me it was just crazy to bring a child into the world that no one wanted. No one asked me if I wanted her, but I did at that point,” Maegan told LifeSite.

Maegan went to London, England, to visit Nathan where the family was staying while filming the new Star Wars movie. There, she says, Nathan and Marilou scheduled a what she thought was an ultrasound but was actually a consultation for an abortion. Maegan relates that she avoided the pressure there by telling Nathan she would have an abortion in Los Angeles and then making the arrangements for the LA appointment by voicemail with Nathan present.

Once back in LA, she received email messages (seen by LifeSiteNews) from Marilou, who offered to pay for the abortion and sympathized with her. However, in a response to Meagan’s resistance, Marilou wrote, “So to have a relationship with him (or not): you go with him in the am [to the abortion appointment] … That is the only option now.” About Meagan and Nathan’s future, she says, “With baby, you won't see him; without baby, you will.”

Marilou said Maegan was being “selfish for wanting to keep the baby when she'd only have one parent” and from Mark’s email address told her, “I would never want to raise a child without the father around. It is hard enough to do it with a partner, but alone, it would be far too lonely.”

Maegan relates that after her first abortion attempt was thought to be successful, Nathan wanted to break up, even though before it he told her he wanted to continue their relationship.  In fact, she said, upon discovery of her pregnancy, she herself suggested that they break up, but “he still wanted us to be together because we had a good thing going … and that he really wanted me to get an abortion.” However, Maegan says, “Not even a week after doing the medical abortion as he had asked me to do, he told me that he didn't think we were making each other happy and that we should break up.”

Vicki Thorn, founder of Project Rachel, a Catholic ministry that brings offers healing and reconciliation to men and women suffering grief and remorse from the trauma of a past abortion, told LifeSiteNews that Maegan’s experience is not at all unique. Women often decide on an abortion for the sake of their relationship with a boyfriend, she said, though statistics show only 30 percent of relationships that lead to abortion survive.

Maegan has named her child Autumn. And she has some advice for women facing pressure to abort.

“I found out rather late into all this drama that there is a form they can get from pro-life places that if signed and presented to an abortion clinic that no abortionist will see them,” she said. “I would recommend them being honest with the doctors in the back about what's really going on.”

Maegan regrets the abortion attempt. “Abortion will never be for me, as I found out when I went through the first surgical one that I had,” she told LifeSiteNews. “I shouldn't have even let Nathan pressure me into taking the abortion pill, but I felt terrified at the thought of being abandoned while pregnant.”

Maegan is seeking legal support for her child from Nathan.

The New York Post, which ran a brief story on the abortion pressure from the Hamill family, began the article referencing the famous line from the Star Wars film series directed at Luke by Darth Vader with a slight twist. “Luke, I am your … grandchild.”

LifeSiteNews contacted Nathan and Marilou Hamill but did not receive a reply.

1
It’s beginning to look like the establishment will throw Zelensky under the bus to save face
2
How the US gov’t built a shadow structure that enabled COVID vax ‘bioterrorism’
3
Abp. Viganò: Our Lady’s humility is an intolerable affront to the ‘pride and disobedience’ of Satan
4
‘Never Again’ documentary takes deep dive comparing COVID propaganda with Nazi Germany
5
Dolly Parton says new song about God’s warning to avoid sin ‘came to me in a dream’
Subscribe to Daily Headlines »