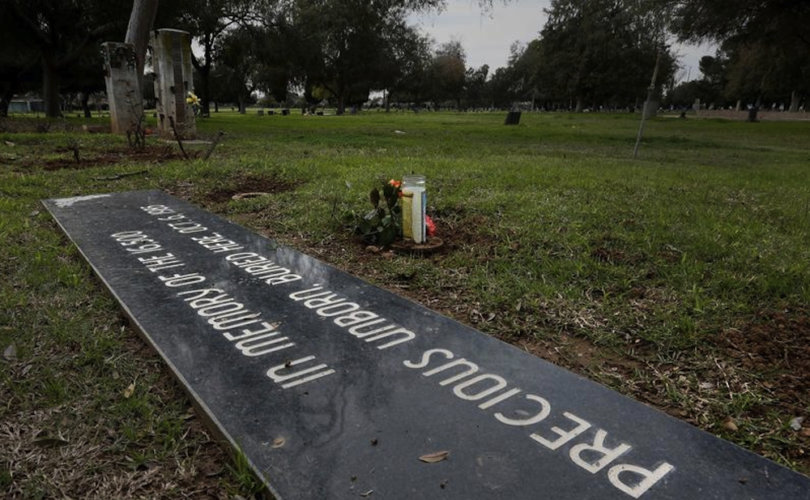 A stone in a Los Angeles cemetery marks the grave of more than 16,000 aborted children from a 1980s case.

LOS ANGELES, California, February 10, 2017 (LifeSiteNews) — In an article about the humane disposition of aborted babies, the Los Angeles Times featured the story of 16,431 aborted babies found in a storage container in 1982 with a picture of the cemetery plaque honoring them.

On January 23, the Times published “The latest battlefront in the abortion wars: Some states want to require burial or cremation for fetuses.” The article detailed the debate over pro-life legislation to respect aborted babies' remains, calling it “a new front in the battle over abortion.”

Thousands of aborted babies were found in the Woodland Hills backyard of Malvin Roy Weisberg, who ran a phony “pathology” laboratory that collected aborted babies in order to bill the government for “pathology” exams of the bodies.

Because Weisberg's check for the 20-foot storage container bounced, the container was repossessed and the babies were discovered. A legal battle then ensued all the way to the Supreme Court over giving the babies a proper burial.

Albin Rhomberg was part of a group dubbed “Americans Committed to Loving the Unwanted” that fought for humane treatment of the babies.

“It took us around three years of litigation and a lot of political efforts to finally obtain the burial of the more than 16,000 aborted children in the Weisberg case,” Rhomberg, who is also one of the founders of the Center for Medical Progress, told LifeSiteNews. “And even then, only in the rather bleak and obscure Odd Fellows Cemetery in East Los Angeles — partly because it was not religiously affiliated.”

The U.S. Supreme Court let a lower court ruling stand that allowed burial, but only in a secular cemetery.

Hundreds of pro-lifers attended the 1985 burial, which Rhomberg called “the largest such burial in the United States and in the world — and in history.” Then-President Reagan sent a message advocating for memorial services “for these children,” calling abortion “a national tragedy” and lamenting “a whole category of human beings has been ruled outside the protection of the law.”

“When we publicized the 'Weisberg Incident,' women who had abortions in Los Angeles around that time got in touch with government authorities, wanting to reclaim their aborted child's body for humane disposition,” Rhomberg told LifeSiteNews.

Arkansas, North Carolina, Texas, Louisiana, and Indiana have laws to treat human aborted babies with respect. The Los Angeles Times characterizes such laws as “forcing” women with additional, unnecessary burdens — that the remains of the unborn must be treated like the remains of the born.

Kristi Hamrick of Americans United for Life summarizes the pro-life view: “A civil society does not throw the bodies of human beings into a landfill.”

Most abortuaries incinerate the babies or put them through a “medical waste” sterilization process before dumping them in a landfill. Some abortuaries literally run the babies through a garbage disposal, grinding up the human remains. Rhomberg said in at least one instance, an aborted baby remains clogged the sewer system.

“It seems tragic that we are now reduced to trying to obtain respect for the lives of unborn children by legislative and legal efforts to require that their remains be treated with human respect, and not merely as 'medical waste' to be incinerated or disposed of in a landfill or simply flushed into sewers, ending up in the sludge fields of a sewage treatment plant,” Rhomberg commented.

California requires burial or cremation of baby remains at 20 weeks’ gestation or more.  Younger babies are considered “medical waste” unless state law delineates that they are a “recognizable dead human fetus.”

Live Action sent women undercover to ask what abortionists do with baby remains.  Abortionist Laura Terese Mercer claimed, “The fetus and everything that goes along with it … is sent to a crema(torium) … like, a funeral home, and they're cremated, and then the ashes are spread out in the desert, or … into nature.”

Mercer's medical license is up for renewal in April.

After the 16,431 aborted babies were found, Los Angeles County District Attorney John Van de Kamp said they would be examined and criminal charges filed if any were older than the state legal limit of 20 weeks. Officials found 193 babies were above the legal limit, and some were as old as 30 weeks.

Nevertheless, no charges were ever filed against any abortionist, and none against Weisberg.