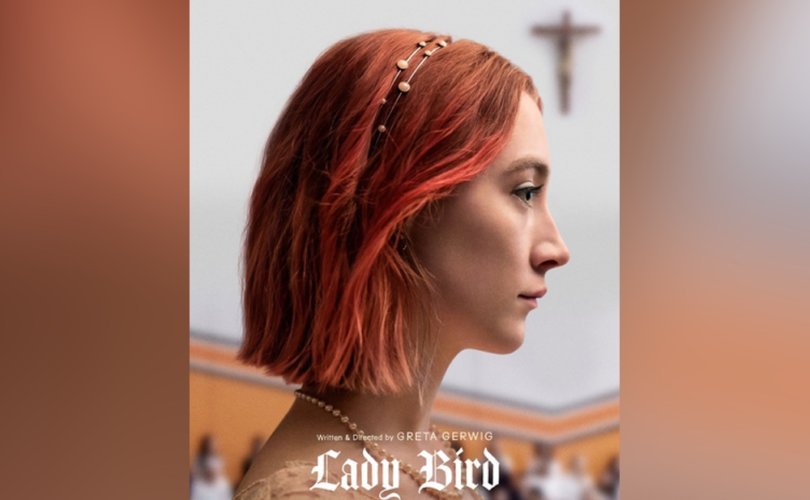 DUBLIN, Ireland, March 2, 2018 (LifeSiteNews) – As campaigning intensifies in the lead-up to Ireland’s abortion referendum, Irish actress and Oscar hopeful Saoirse Ronan has weighed in on the debate, signaling that she’ll be voting for a woman's right to “choose” abortion.

The 23-year-old Ronan is a contender in Sunday’s Academy Awards for best actress for her role in Lady Bird, in which she plays a rebellious teenager who enrolls in a Catholic school while in a running battle with her mother. She is second only to Jennifer Lawrence in receiving three Oscar nominations before the age of 24 (for Atonement and Brooklyn).

The Motion Picture Association of America has given the critically acclaimed and popular movie a restricted rating for “language, sexual content, brief graphic nudity and teen partying.” Focus on the Family has cautioned parents about letting their teens watch the film for its explicit depiction of a troubled girl “exploring sex, drugs, heavy drinking.”

Irish citizens vote in May on whether or not to repeal the 8th amendment of its constitution, which recognizes the unborn child’s right to life.

Ronan strongly implied in the Irish Times she’ll be voting to repeal the pro-life amendment.

“I was coming into my womanhood when that discussion was being had after the marriage referendum,” she said, referring to Ireland’s May 2015 referendum that approved homosexual “marriage.”

Ronan, who was born in the Bronx but whose parents moved back to Ireland when she was three, said she thought Ireland has “definitely taken a turn” since the homosexual “marriage” referendum.

“I do feel it’s become more of a modern, cosmopolitan place. It’s such a turnaround. I feel like there is a turning point with our generation. Women are being empowered in a way they haven’t before.”

According to the Irish Times, Ronan’s fellow citizens have pinned their hopes on her winning an Oscar on Sunday, although most bets are on Frances McDormand, for her performance in Three Billboards Outside Ebbing, Missouri.

But whether they put any stock in Ronan’s abortion opinion is another story.

The Dublin-based Life Institute has led a nationwide grassroots canvass going door to door on the abortion issue for the past two years, and director Niamh Uí Bhriain says she doesn’t feel people are influenced unduly by what celebrities think in regard to the referendum.

“We have found that it is the experiences of ordinary people, including those heroic women who have babies in very difficult circumstances or parents who advocate so bravely for all children with disabilities, that really resonate with people on the doors,” she told LifeSiteNews in an email.

However, it’s undeniable the pro-life advocates are up against pro-abortion bigotry in the Irish media. Indeed, one pro-life commentator described the Irish Times as “so biased that they are no longer aware of their bias, so sure are they of obtaining their objective of turning Ireland into an abortion regime.”

With 11 weeks left before the referendum, the Life Institute is ramping up its campaign, including joining other pro-life groups to promote the All-Ireland Save the 8th Rally for Life to be held in Dublin on March 10.

“Stand up for human rights, rise up against the media and political elites, and protect the most vulnerable in our society,” says a rally promo video.

The Life Institute also recently launched #MyAbortionStory, which exposes the reality of legal abortion by publishing on billboards and videos the testimonies from former abortion workers, nurses, and women hurt by abortion. The pro-life campaign is accepting donations here.