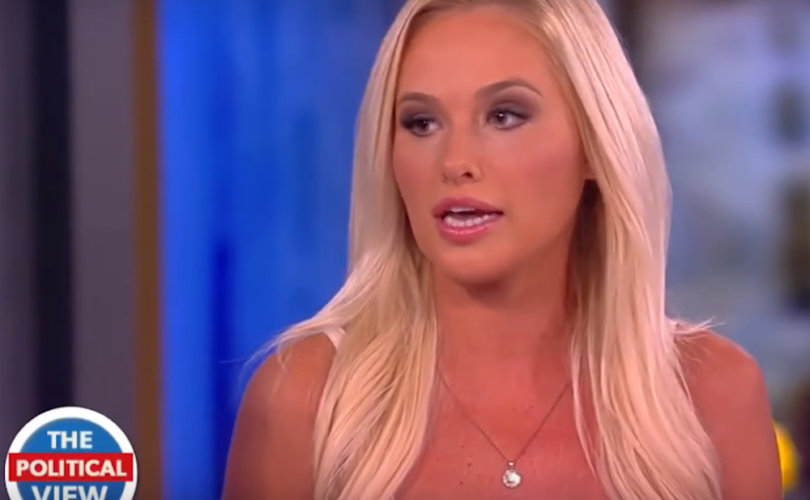 March 23, 2017 (LifeSiteNews) – The Rebel media’s Faith Goldy called out Tomi Lahren this week after The Blaze host stunned conservative audiences when she came out as “pro-choice” during an appearance on ABC’s The View.

Production of the young firebrand’s own show, Tomi, on Glenn Beck’s network was suspended for a week after she made the stunning statement last Friday. Lahren justified her stance by saying “I love the constitution” and as conservative believe strongly in “limited government.”

“I can’t sit here and be a hypocrite and say I’m for limited government but say I think the government should decide what women do with their bodies,” she said at one point on the liberal-leaning show.

Goldy addressed Lahren's comments, saying at The Rebel, a conservative news source based in Canada, that she needed to correct her U.S. counterpart in the hope of saving her.

“She’s too much of an asset to our side,” said Goldy, “to see her go” over to the liberals. However, even though Goldy likes Lahren's style, she went on to “debunk every tired pro-choice argument Tomi used, and remain as nice as possible.”

Goldy began her rebuttal by showing “before” and “after” clips of Lahren. In the first clip, Lahren sounded very pro-life as she attacked feminist celebrity Lena Dunham for wishing she had had a chance to have an abortion. Lahren called her “Lena frigging Dunham wishing she could have murdered a fetus.”

The second clip was from last Friday’s spot on The View. Summing up her own views, Lahren told the hosts, “I can say that as a Republican, I can say I’m for limited government so stay out of my guns and stay out of body as well.”

Goldy promised to stay away from Lahren’s professed close relationship “with her personal savior” but framed The View views as “I love God, I love guns and I love killing babies.”

She added, “Five minutes, five minutes and that’s all it took on The View for Tomi and she shape-shifts from a brainy southern belle into a lightheaded twot about to strap on her pussy hat.”

After Goldy expressed more regret for the job she had to do — “I don’t take pleasure in shooting inside the tent” — she approached Lahren’s arguments head-on.

First, on Lahren’s argument that she was for abortion because she loved the constitution, Goldy responded, “News flash, there is no constitutional right to abortion. Roe v Wade decision was one of shystiest rulings in Supreme Court history.”

Next Goldy took on Lahren’s contention that her belief in “limited government” was consistent with her “pro-choice” resistance to any government telling her what to do with her body.

However, the baby is not her body, Goldy argued fiercely. “The unborn has different DNA and different blood type than the mother, not to mention the fact that its heart begins beating at four to five weeks. Point to any other organism that has two heads, four arms, four legs, two spines and two hearts. … It’s not dogma, it’s science and its not up for debate.”

Finally, Goldy argued against any libertarian defense of abortion. “Abortion violates the non-aggression principle,” she contended. This she called “the defining principle of libertarianism.”

“It’s not optional, not even for pregnant women. Human offspring are human, not a mushroom, not a cat. There is never a right to kill an innocent human.”

Goldy concluded with the comment: “Tomi can dish it out. I hope she can take it.”