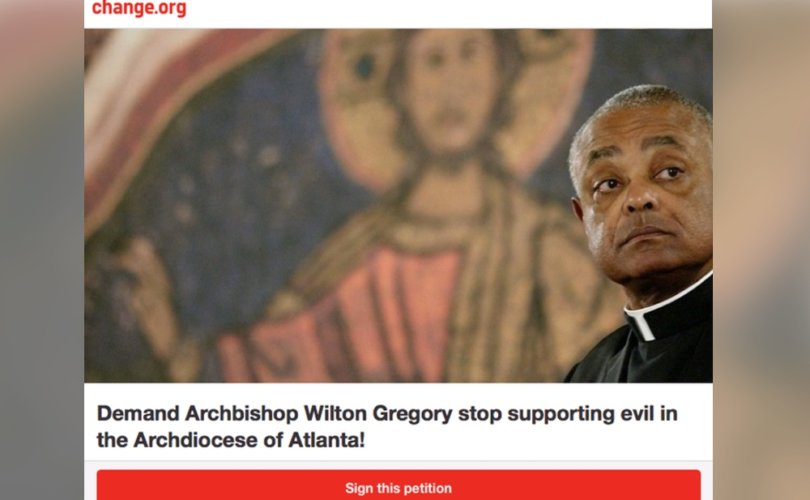 ATLANTA, Georgia, August 21, 2018 (LifeSiteNews) – Catholics are petitioning Atlanta Archbishop Wilton Gregory to remove pro-homosexual priests from public ministry within his archdiocese after news broke last week of the archbishop’s appointment of an LGBT-affirming priest in the role of official diocesan spiritual director for victims of clerical sex abuse.

“Demand Archbishop Wilton Gregory stop supporting evil in the Archdiocese of Atlanta,” the headline of a Change.org petition states.

“Demand Archbishop Wilton Gregory remove actively gay priests from public ministry, stop supporting parishes who openly endorse LBGT lifestyles, activities and behaviors that are contrary to Church teaching,” the petition reads, “and stop “looking the other way” from evil in our Archdiocese!”

The petition, created by laity, is directed to Archbishop Gregory and the archdiocese.

LifeSiteNews reported last week on Archbishop Gregory naming Monsignor Henry Gracz, pastor of the pro-LGBT Shrine of the Immaculate Conception in Atlanta, as a “Spiritual Director for Victims” for the archdiocese.

The Archdiocese of Atlanta website tells abuse victims that, “Archbishop Wilton D. Gregory has appointed a group of priests as spiritual guides to reach out to you as you may be experiencing confusion and hurt in your relationship with the Catholic Church.”

The Atlanta archdiocese did not respond to an inquiry from LifeSiteNews about Gracz being appointed to provide spiritual direction for victims of sexual abuse.

Word of the appointment came amid continued abuse revelations that have again rocked the Church in recent months, first in June against archbishop Theodore McCarrick, and then with the Pennsylvania grand jury report following last week, detailing decades of clergy sex abuse there.

The U.S. Church’s own studies have shown that the overwhelming majority of abuse in the Church’s sex abuse crisis has generated from homosexual clergy. The data in the Pennsylvania report bears this out as well.

The Holy See has issued directives more than once prohibiting the ordination of men with deep-seated same-sex attraction.

In light of this and the statistics, theologians and other experts have begun calling for acknowledgment and abolition of a longtime presumed homosexual network within the Catholic clergy that wields power over priests and seminarians, favoring those who go along and penalizing other who do not.

Catholics are increasingly frustrated by the scandal and are beginning to call more and more for accountability among Church leaders.

The Catholic who contacted LifeSiteNews requested anonymity, and said of Gracz’s appointment, “This is very concerning. Isn’t this what we’re talking about with McCarrick?”

The Shrine parish is well known as the “gay parish” of the archdiocese, according to the local Catholic, who said as well that Msgr. Gracz “gives carte blanche to everything gay in Atlanta.”

The parish has a “Pride Outreach,” operates a booth at Atlanta’s gay pride week, and sends a parish group to march in Atlanta’s Pride parade each year.

The parish also hosts GLBT socials and socials specifically for LGBT couples. It is rated as “very gay friendly” on the travel website Trip Advisor.

The petition can be accessed HERE.